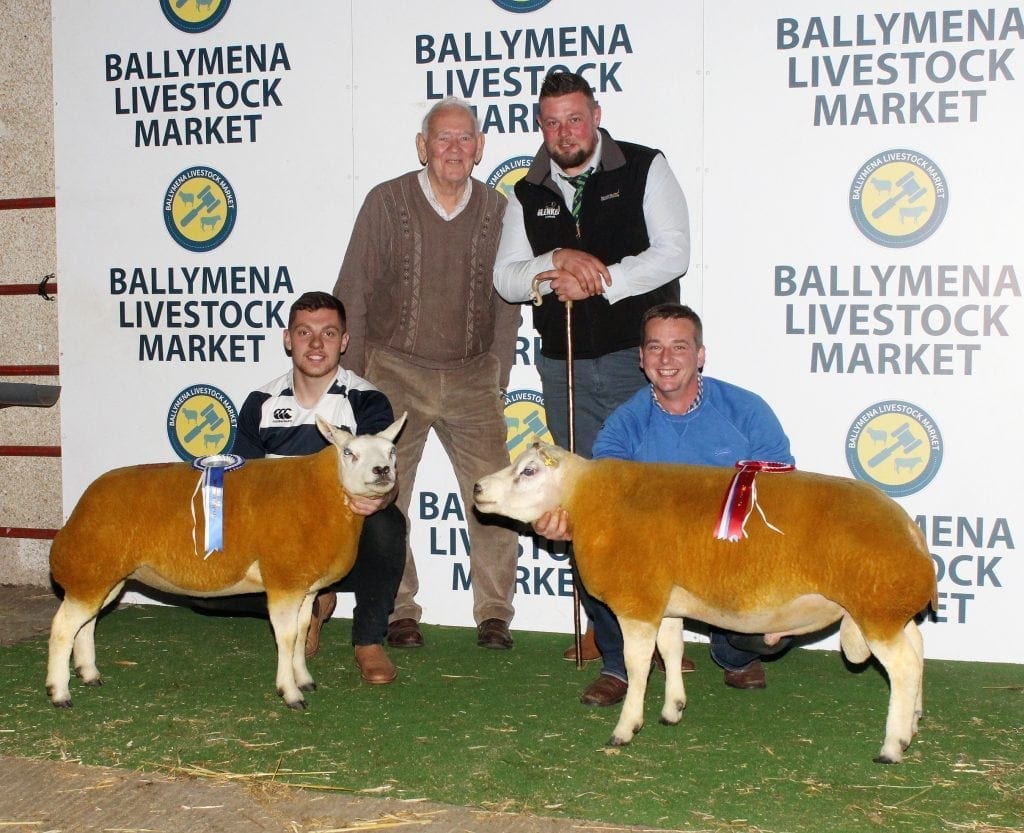 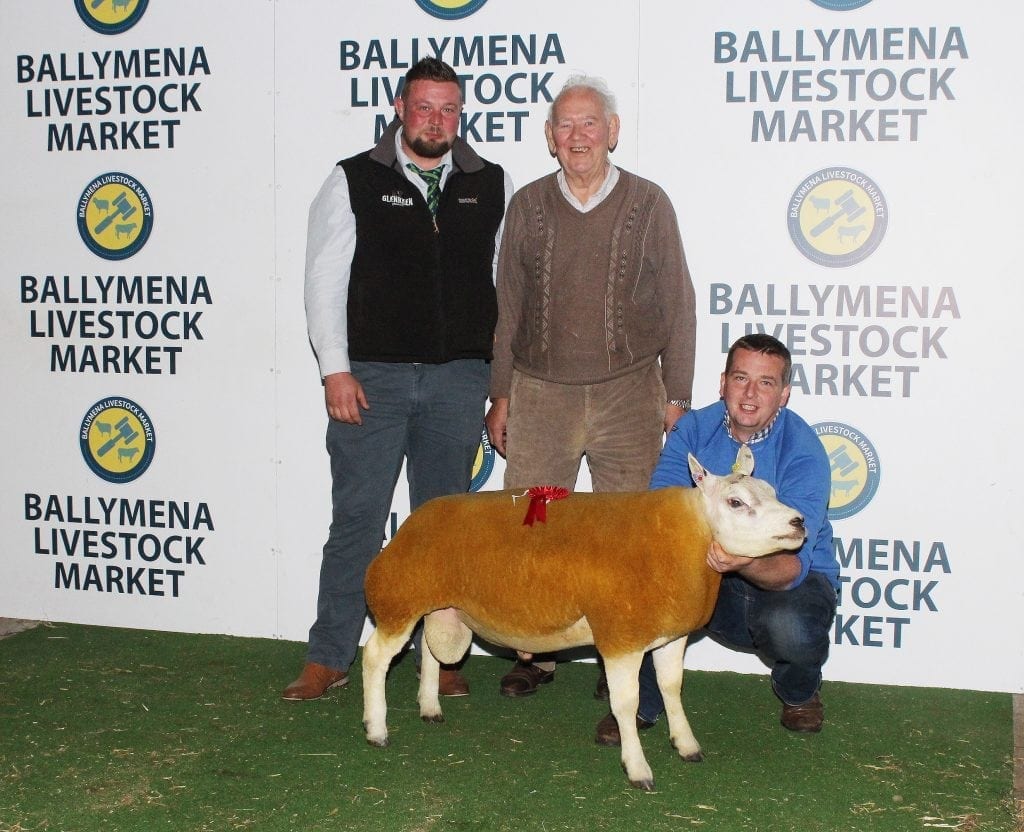 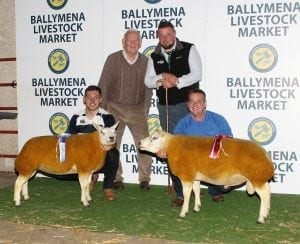 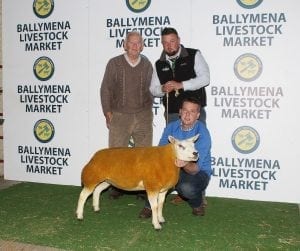 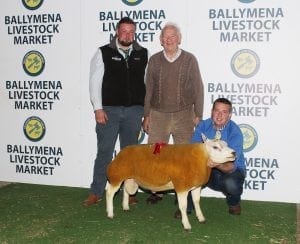 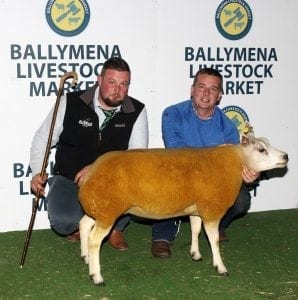 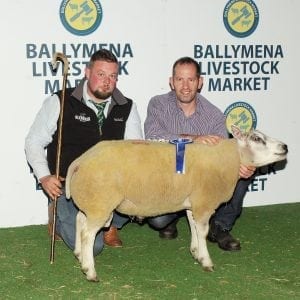 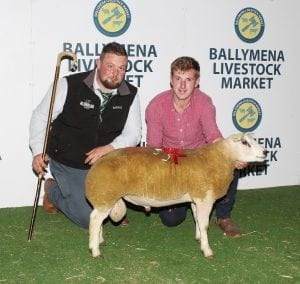 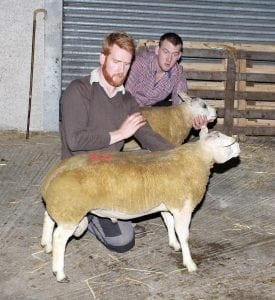 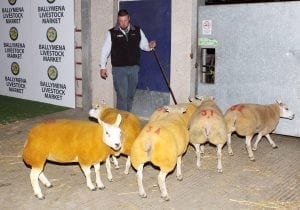 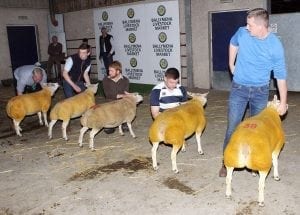 Lining up in the Shearling Ewe class. 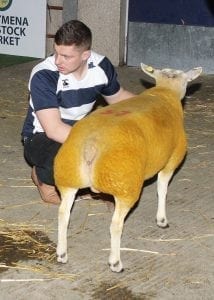 David Fullerton showing Brownville Cinderella ET on behalf of David Brown’s Brownville Flock. The Shearling Ewe went on to be tapped out as Reserve Female Champion. 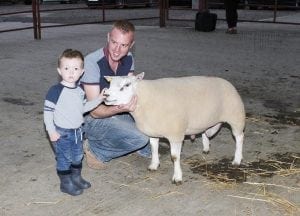 Peter Clarke from Boardmills, Lisburn is assisted in the showing of a Shearling Ram belonging to S P & R Clarke by young Robbie Clarke. 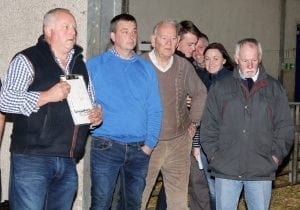 Waiting on the Beltex classes to commence 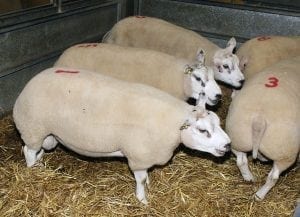 It was very much a ‘Champion’ night for David Brown and Mark Latimer’s Brownville Flock at the Irish Beltex Sheep Breeders Club Show and Sale held at Ballymena Livestock Market on Monday, 17th September.

Reigning Supreme was Lot 11, Brownville CJ ET, a Shearling Ram sired by The Bare Boy and out of Brownville Tomboy.

Meanwhile the Reserve Champion title went to Lot 38, Brownville Caramel, a Shearling Ewe, sired by Artnagullion Barbour ET with the Dam, Brownville Take Me Out.

The judge, Beltex Sheep Society Chairman, John Harbinson from Limavady said the Supreme Champion was “a good strong, correct sheep with plenty of body and power whilst the Reserve Champion was “ a great carcass gimmer with super gigots – a good all round sheep”.

Sired by Coolough Bungle in the Jungle this well-shaped Ram was out of Coolough Tidy ET.

The highest price on the night in the sales ring was 750gns paid for the Supreme Champion, Brownville CJ ET, by show judge, John Harbinson.

Next highest price was 700gns which was given by M.J. O’Hara for John Donaghy’s Reserve Male Champion, Lot 19, Coolough Chemical Anchor.

This was followed by a price of 420gns paid for Lot 12, Brownville Charles, another Shearling Ram belonging to David Brown and Mark Latimer – the purchase was made by James Jardine.

Omagh-based Sean Daly achieved the next best price of 350gns for Glenview Common, Lot 14, a Shearling Ram. The buyer was Colin Woodside.