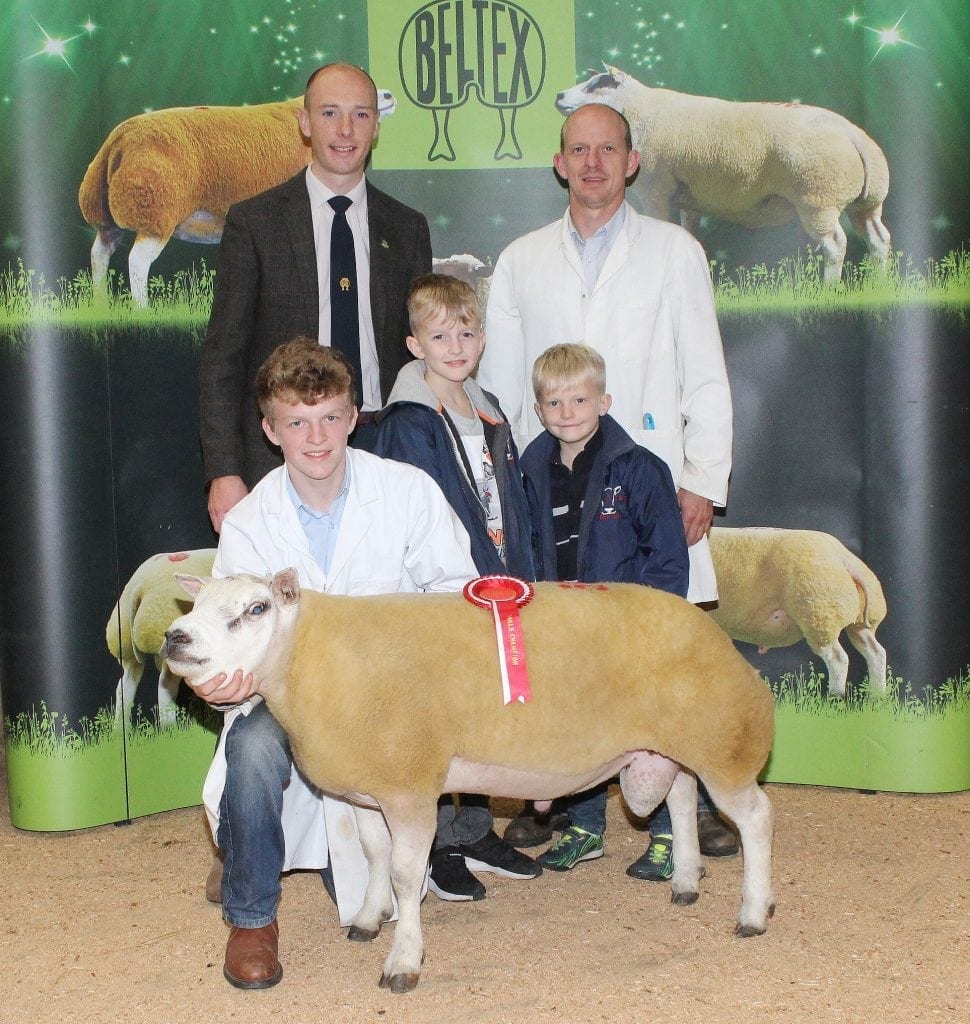 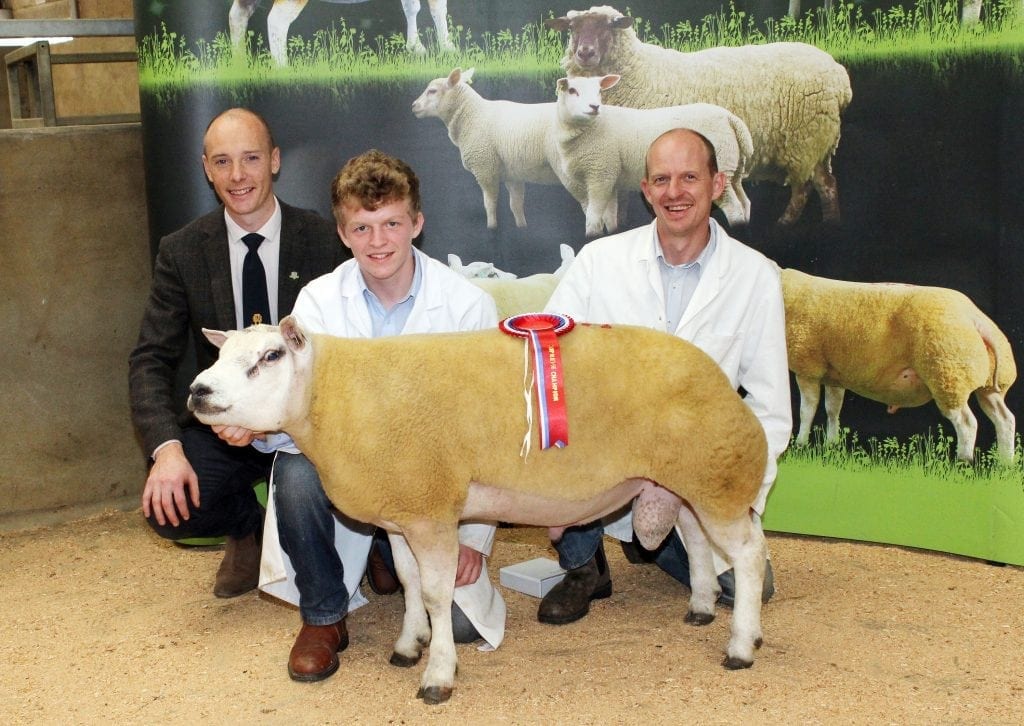 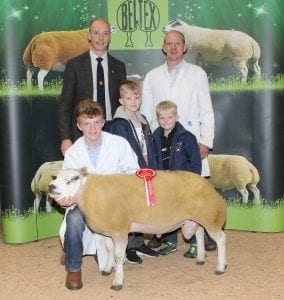 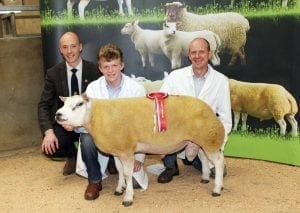 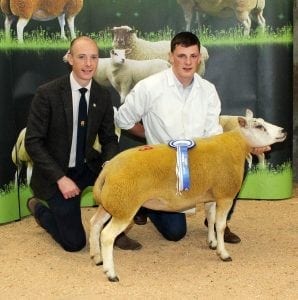 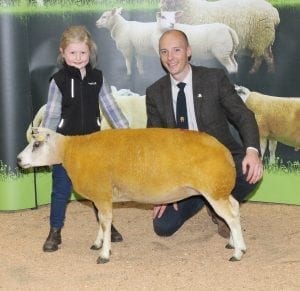 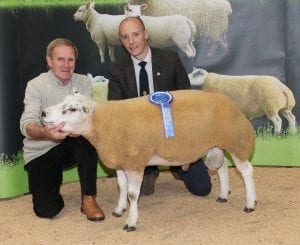 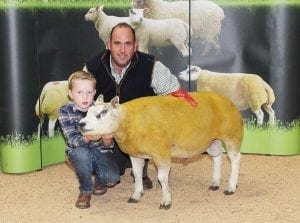 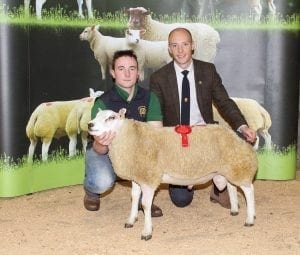 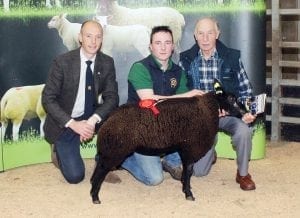 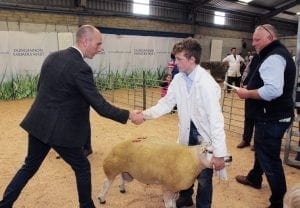 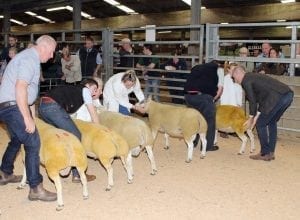 Lining up for the judge in the Shearling Ram Class 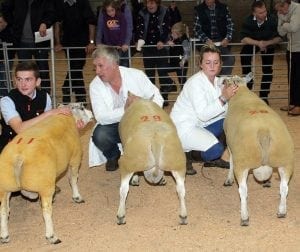 Scottish judge, Grant Anderson, tapped out the home-bred Ram whose Sire was Kingledores Apollo ET and the Dam, Rocksolid Tumble.

Judge Grant Anderson, who is an auctioneer with Harrison and Hetherington and a renowned Beltex breeder having until recently held the record price given for a Beltex ram, 60,000gns paid for his much lauded Topflite Al Pacino, described the Supreme Champion, Bodoney Caveman ET as “a good muscled ram that was very correct”.

He described the Reserve Champion Shearling Ewe, Artnagullion Cleo ET as “a long and clean Shearling Gimmer that was also very correct”.

The Shearling Ram class followed and this was highly contested.

Runner-up in the class was Carnew Cash (Lot 24) belonging to Mrs C. Aiken from Dromara.

Finishing in second place in the Shearling Ewe class was Glenkeen Cbeebies ET (Lot 69) from Limavady-based F & J Harbinson who went on to take the Reserve Female Champion title.

The Ram Lambs class was won by Ravara Dirty Old Town (Lot 55) belonging to A Murray & Son from Ballygowan.

A total of 90 MV Accredited and Scrapie Monitored Pedigree Sheep were listed for sale on the day with the top price of 1120gns paid for Bodoney Charlie ET (Lot 39) a Shearling Ram belonging to Andrew and Jamie McCutcheon, Trillick.

The Ram, which finished in third place in the Shearling Rams class, was purchased by John Laverty from Armoy.

Next best was 650gns paid by S. Rooney from Sligo for Derryouge Chic, (Lot 84) a Shearling Ewe belonging to Edward and Shirlee Nicholson from Kilkeel.

The Ram Lambs class winner, Ravara Dirty Old Town, belonging to A. Murray & Son, was purchased by Geoffrey Porter from Crumlin for 340gns.

The Show and Sale was sponsored by Roxan, suppliers of the Tag Faster Automatic Tagging Applicator.