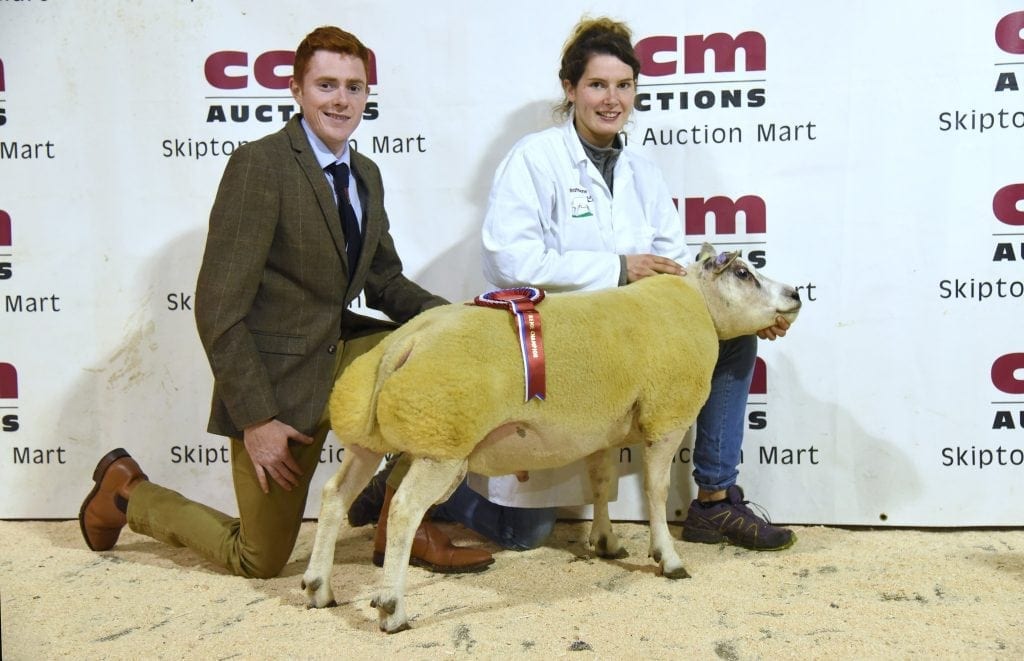 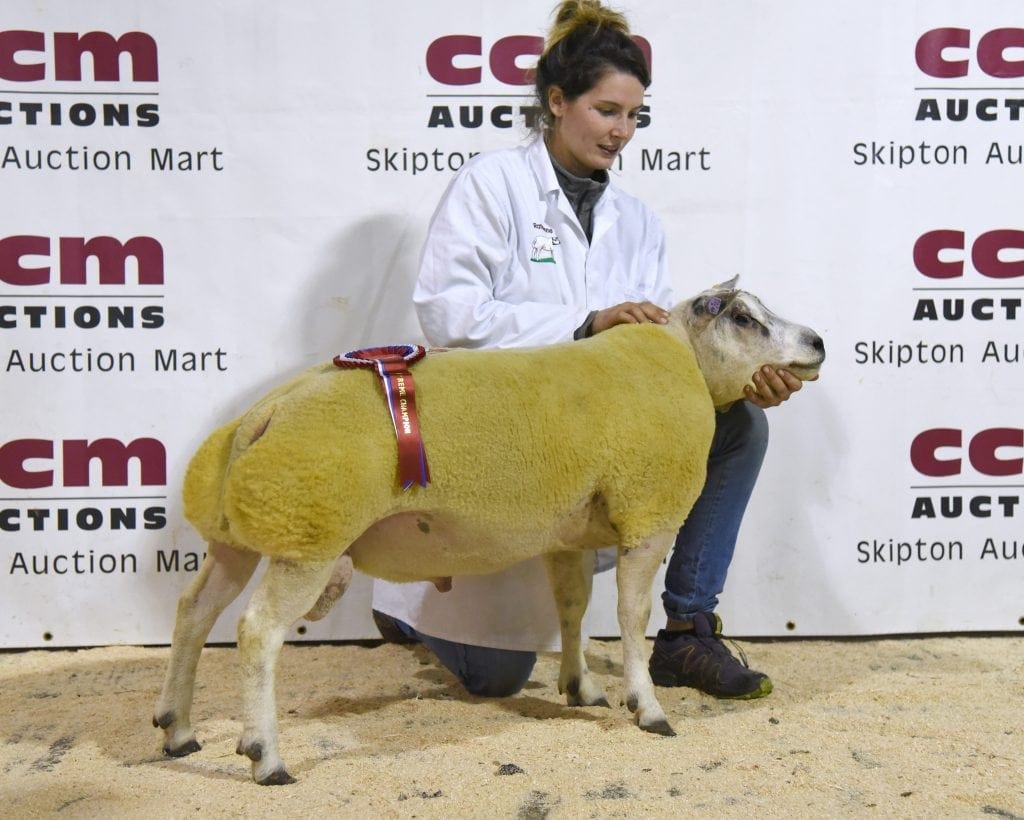 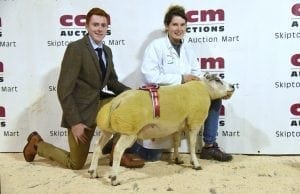 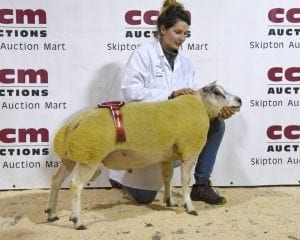 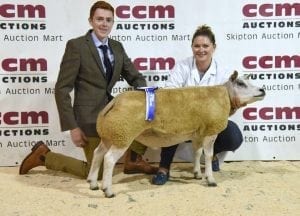 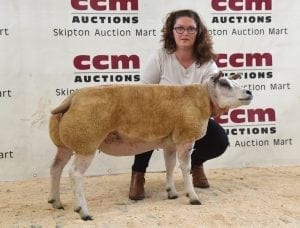 Reserve champion from K C B Shuttleworth sold for 3800 gns

It was the first prize shearling ewe, female champion and overall reserve champion from husband and wife breeders, David and Karen Shuttleworth, who run the Heber Park flock at Heber House Farm, Gargrave, which commanded the day’s leading price of 3,800gns.

Celebrating the 10th anniversary since the flock’s formation, their March, 2017, gimmer shearling, Heber Park Claribell, which had earlier stood ninth in class at this year’s Great Yorkshire Show – the couple’s sixth prize winner the same day has since sold for 7,500gns – was by the Beachy Perfection son, Corra Wally, a tup borrowed from County Durham’s Henry Jewitt and since sold by him for 1,800gns.

Out of Dean Brow Tinkerbell, acquired as a gimmer shearling from Lancashire’s Harry Wood., the top price Claribell was secured by a Red Rose farming partnership – Nick Brown and his partner Charlotte Ormonroyd, of Claughton, Lancaster, and Dan Towers, of Wray.

Nick and Charlotte were purchasing the Skipton reserve champion for the second year running. Their 2017buy, a 4,200gns shearling ram from the Artnagullion pedigree flock in Ballymena, has since been put to good use on their expanding Bronic Beltex flock, now almost 20-strong and further enhanced by their latest top-notch female acquisition, which will either go to their Artnagullion ram or a home-bred shearling tup.

The young couple, who took over their first farm in 2016, were themselves in action in the sales ring shortly before the top price acquisition, selling their pen-leading February, 2017, shearling ewe, Bronic Camilla, sired by College Awesome, for 1,300gns to Dan Towers himself.

It was the first prize winner and male champion from the North Craven Rathbone flock of father and daughter, Mike and Becki Davis, of Ravenshaw Farm, Eldroth, who were securing their first-ever Skipton title with Rathbone Cooper.

The March, 2017-born son of Y Bedol A-Team, bred in Wales, though since acquired from Belgium after joining Mark Messien, and doing well in his first season for the Davis family – he has sold shearling tups to 3,200gns – was out of one of the flock’s flushing ewes, the Drumchapel Scooby daughter, Rathbone Winnie.

The title winner attracted keen interest from many breeders, going on to top the ram trade at 2,200gns when joining Irish breeder David Brown’s Brownville flock in Bessbrook, Co. Down.

Mr Davis established the Rathbone flock in 2002, with his daughter, now 27, coming into the fold straight after leaving Giggleswick School. They currently run around 140 pedigree ewes, a mixture of Beltex and Dutch Texel, and have always done well at their local Beltex showcase.

Also achieving 2,000gns was the first prize ram lamb and reserve male champion from Scottish breeder Richard Wood’s Kingledores flock at Tweedsmuir, near Biggar, in the Scottish Borders. Shown by his father, John, Kingledores Demonstrator, a son of Clary Chancer, from fellow Scottish breeder Jock McMillan, out of Kingledores Betty Boo, the 2018 Highland Show champion, was knocked down to Scottish breeder Stuart Wood, who runs the Woodies flock in Skerne, Aberdeenshire

Mr Wood himself caught the eye with a brace shearling rams at 1,800gns and 1,500gns, the former claimed by P&AM Simpson, of Dacre.

The first prize ewe lamb came from Graeme Sinclair, who runs the flock of the same name at Carsphaim, near Castle Douglas in Dumfries and Galloway. His March-born Sinclair’s Diamond, by the 10,000gns Kingledores Battleaxe, sold locally for 1,300gns to Thomas Heseltine in Bolton Abbey.

Another four-figure performer with a 1,200gns shearling ram was Richard Seed, of Chipping, while the second prize ram lamb came from Ireland’s Matthew Burleigh, who runs the Matt’s flock in Enniskillen, Co Fermanagh. His February-born home-bred Matt’s Dancer, by Murrays Code, sold for 1,000gns,

The opening aged ram show class fell to another local breeder, Stuart Currie, who runs the Beautry flock in Rathmell, with his February, 2016, Beautry Brave Heart, by Matt’s Ambassador, a 3,000gns acquisition three years ago, who has bred shearling ewes to 2,500gns and was also responsible for the reserve champion and top price 1,300gns shearling ewe at Skipton’s in-lamb Beltex fixture last December.

Out of the Rathbone Leader daughter, Beautry Paula, one of the best ewes in the flock, the ram sold for a class-topping 1,000gns to Skipton regular Robert Towers, of Farleton, Lancaster.

While the second prize shearling ram from former Skipton champion, Northern Ireland’s Elizabeth McAllister, who runs the Artnagullion pedigree flock with her brother William at Kells, remained unsold, another shearling ram prize winner from the same home sold for 1,000gns, along with a shearling ewe at 750gns.

The first prize aged ewe and reserve female champion came from Gloucestershire breeder Andrew Bishop, who runs the Bishops flock in Eldersfield. His two-year-old Bishop’s Boutique, by The Bulldog, a Belgian import, out of a home-bred ewe, made 800gns.