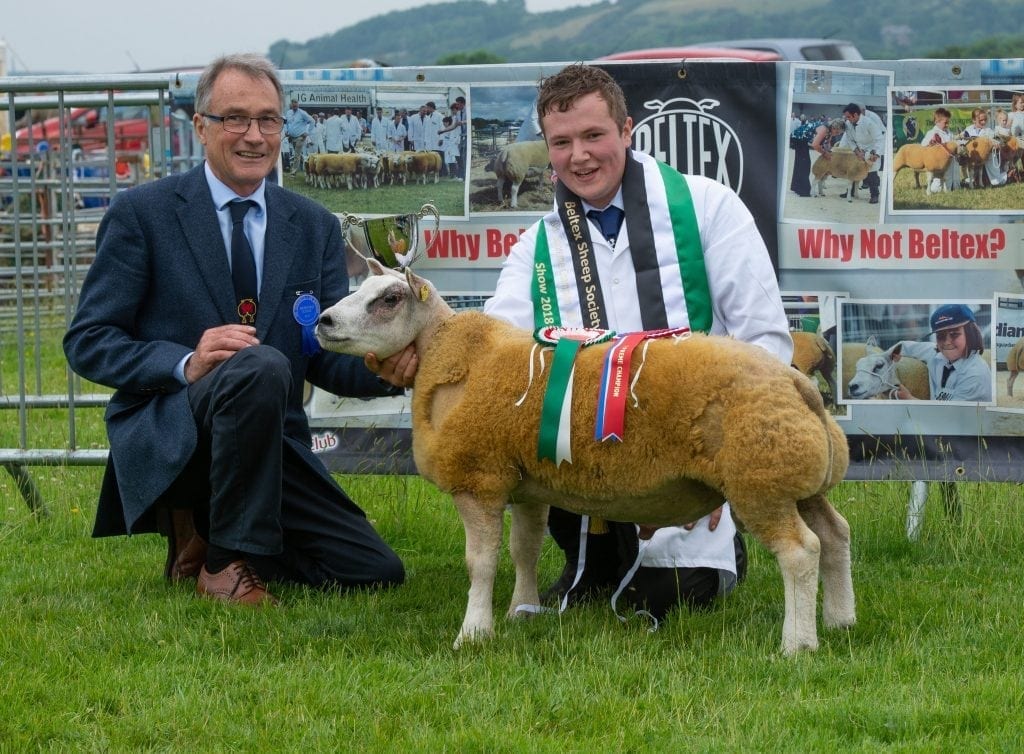 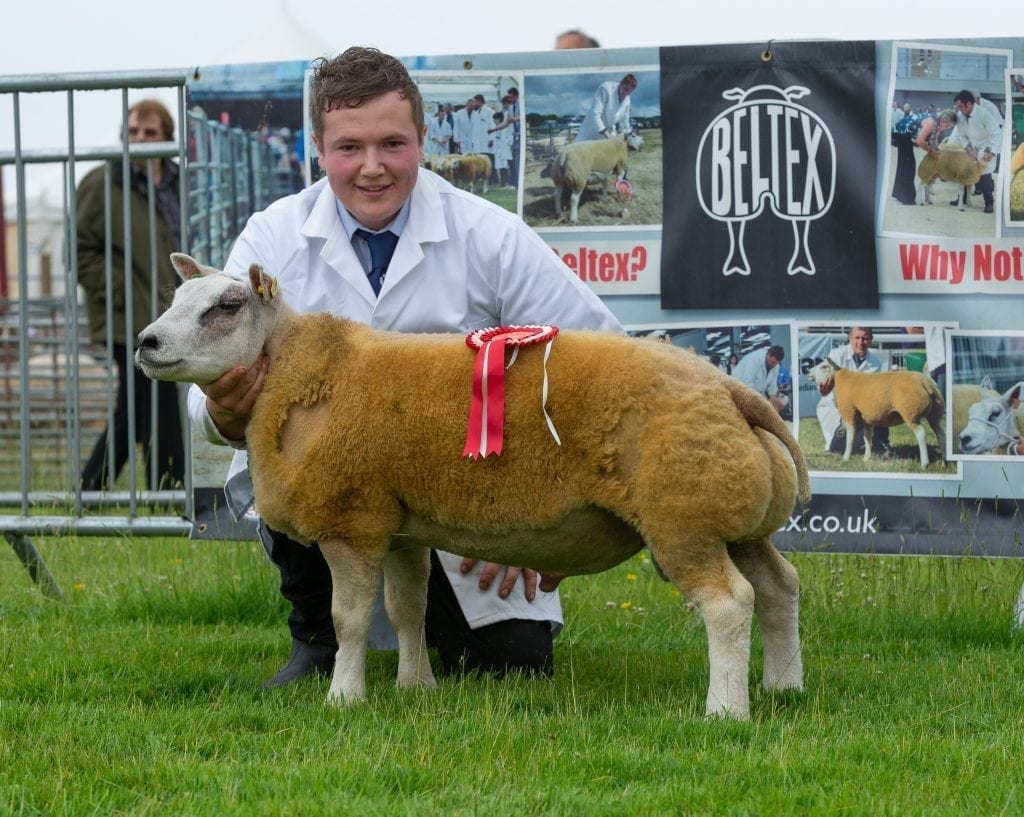 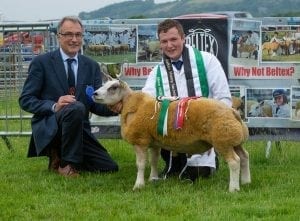 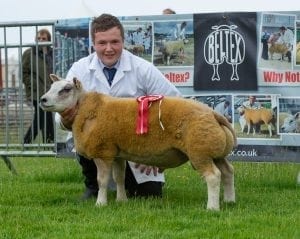 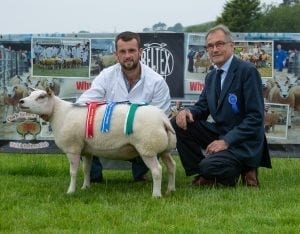 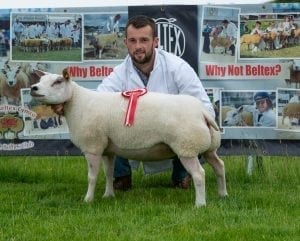 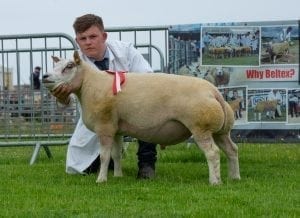 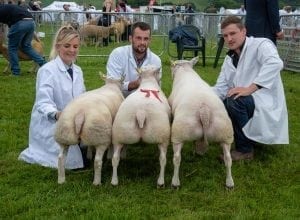 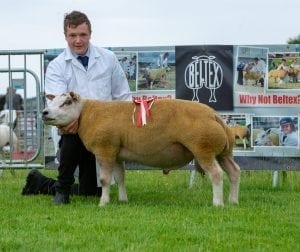 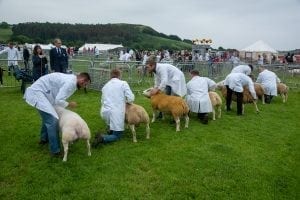 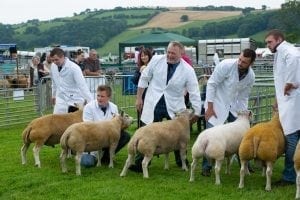 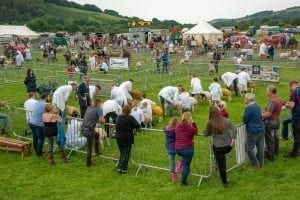 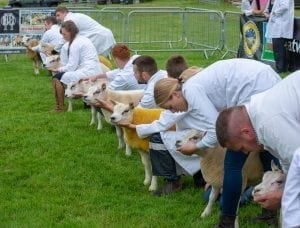 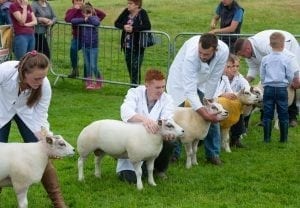 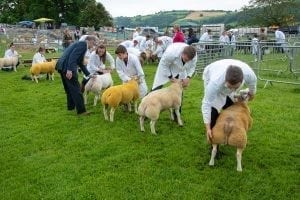 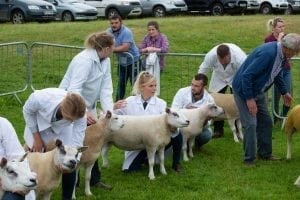 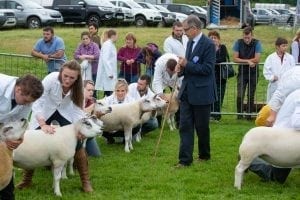 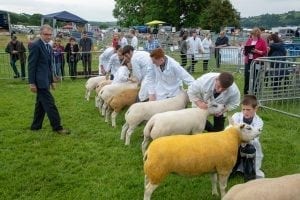 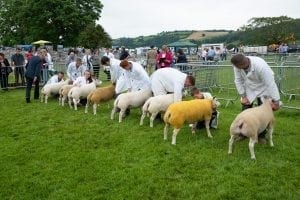 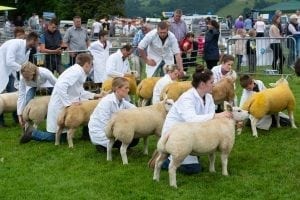 Record entries  (110 sheep entered) at Welsh Beltex National Show at Abberystwyth June 9th 2018
Beltex win interbreed group and Reserve Interbreed Individual
Aberystwyth & Ceredigion County Show hosted the second annual Welsh National Beltex Show on Saturday when breeders from all parts of Wales and beyond turned out a tremendous show of top quality sheep.
Judge Les Hewitt of the Southern Acres flock in Penyffordd, Chester said it was a privilege to judge a line up of such quality, and after an entire morning of judging, selected Fronarth Dynamite a Ram Lamb from Sion Jones Llanon’s Fronarth flock as his Supreme Breed Champion. The February born ET lamb was sired by Muirton Buchan Loon ET and out of Quarrymount Penney, a ewe that has been the foundation of the Fronarth flock producing a whole line of females retained for breeding, whilst Fronarth Dynamite is the first male lamb she produced. Later on in the day, Fronarth Dynamite went on to take the Male Interbreed Championship and eserve Supreme Interbreed Champion of the Show.
Taking Female Championship awards and standing Reserve Breed Champion was the winner of the Shearling Ewe class, Tywi Classy Girl ET, a home bred Ewe from Ioan Jones, Maesybont, Llanelli’s Tywi Flock. Sired by Carrigans B A Baracus ET and out of his own Tywi Seren,  Classy Girl later went on to form part of the winning Group of Three, together with Tywi Catch Me If You Can, (a shearling Ram from the same breeding lines) and the Ewe Lamb Twyi Dam Girl You’re Hot.  This group later took top honours in the Interbreed Group Championship at the Show
Standing Reserve in the Female Championship and selected from an 18 strong class of Ewe Lambs was D E Owen, Conwy’s Smart Ass Delilah, sired by Ardstewart Aristocrat ET and out of Woodies Tweetypie ET.
The  Male Reserve Championship went to another of Sion Jones’ show team, Fronarth Casanova, the Shearling Ram out of Balbrydie Winston and Fronarth Tiger Lily.
D E Owen also took the awards in the Aged Ewe class with his home bred female Smart Ass Annabelle, whilst Edward Lewis of the Giffin flock, Conwy took 1st place Aged Ram class.
Other breeders taking home ribbons on the day were G & K Williams, Lampeter (Dragon), R & S Rattray, Aberystwyth (Rattrays) and A J & J C Neachell, Stafford (Cromwell)
Back to Previous Years...