Taking the top ticket in the Society’s recent Commercial Flock Competition was a pen of commercial lambs from Bryan Fell who runs 750 ewes are Chapel Farm, near Bassenthwaite in the Lake District.

Described by the judge, Joanne Hall, of Inglewood Edge, as ‘a good example of what the Beltex sire can do – even muscle, style and character throughout all the lambs’, is precisely the reason Bryan chose the Beltex breed as his ultimate terminal sire more than 20 years ago.

“I was looking for easier lambing but for lambs to still have good carcase conformation suited to the fat market that also ticks all the boxes for the butcher,” said Bryan, who had previously finished all his lambs to sell through Wigton but in recent years has been selling to both store and breeding homes privately off farm.

“The breed has great versatility too as you’ve got a very sweet lamb to sell store but you can also take them right through to the hogg market,” he said, adding that Beltex-sired lambs can finish easily on grass alone with his first draw of fat lambs sold early August.

The 750-strong breeding flock features Beltex genetics in one way or another with a strong Millenium Bleu influence to provide a bit of extra stretch, while Cheviot ewes have also proved a successful cross to the Beltex ram.

Bryan looks to buy two or three pedigree rams at the Premier Sale at Carlisle every year, with his prize winning pen being mostly by Brickrow and Thacka sires. 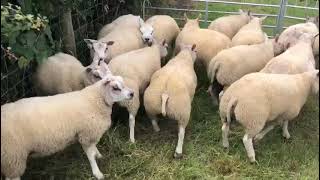