Beltex sheep arrived in the UK from Belgium in 1989 and with their double-muscle traits they brought a totally new dimension to British lamb production. The breed was originally developed as the Belgian Texel, by selecting and breeding for the traits found in culards (double-muscled sheep).

Belgian breeders were greatly assisted by Professor Roger Hanset of the University of Liege, who was a leader in the field of research into the genetics of double muscle and he also played a major role in the development of the Belgian Blue breed of cattle. His colleague, Professor Pascal Leroy carried out research confirming the superior carcase traits of the new breed which he described in his report as Texel DM (Double Muscle). The results of the combined efforts of science and stockmanship can be seen today in the superb conformation and gigots which is the Beltex trademark.

Tom Ashton was the first UK breeder to see these heavily-muscled Belgian Texels and be convinced that they had a role to play in the UK. However, the lack of sheep health schemes in Belgium put imports out of the question. However, thanks to the efforts of M. Paul Hardy, a Belgian ministry official, several flocks were soon tested and achieved the necessary health status to permit exports to the UK.

Tom Ashton and Dr Mike Tempest formed the Bel-Tex partnership which imported the first Beltex and gave the breed its Beltex name. M. Hardy, in his role as organiser of Belgimex, a Belgian breeders’ marketing co-operative, provided encouragement and the finance for the first Beltex stand at the Royal Show. Mary Dunlop and John McIlwraith established the first Beltex flocks in Scotland, while David Brown and Jim and William Carson led the way in Northern Ireland and introduced the breed to the province.

The first imported rams, Lotar van het Korenhof and Mistral were selected for their outstanding conformation and used extensively in the breed in the early years. The demand for Beltex quickly gathered momentum and the rapid expansion of the breed was assisted by entrepreneurs such as Gavin Shanks, John McIlwraith, Alan Thom and others who imported consignments of breeding females which became the foundation stock for many Beltex flocks.

The Beltex Sheep Society was established in 1991. Mike Tempest was elected as the first chairman and in 1992 Helen Ashton was appointed as secretary. In the same year another group of breeders formed the Belgian Beltex Society with John McIlwraith as its chairman. In 1995, the two societies merged under the Beltex Sheep Society banner with Marian Reed as chairman and the logo of the Belgian Beltex Society was adopted as the trademark of the new society. The Beltex Sheep Society was granted charitable status in 2006 and the same year saw the appointment of Rachel Buckle to the post of secretary following the resignation of Helen Ashton after 14 years at the helm of the Society. During this time she was assisted by Pat Johnson who retired in 2006.

Borderway Mart in Carlisle has been the venue for the Society premier sale since 1995 when 240 Beltex were catalogued. However, the very first sales of Beltex were held in 1990 and 1991 at the Ashton family’s Lawns Farm near Wigan, before an increasing entry prompted a move to Chelford Mart for the 1992 sale. The Belgian Beltex Society held their sales in Penrith in 1991 and 1992 with subsequent sales held in Carlisle. Northern Ireland Beltex sales initially took place at the Auto Mart, Portadown, while Lanark Mart became the venue for the Scottish premier sale, and the new Welshpool mart was chosen as the centre for the Welsh premier sale.

No other Continental sheep breed has made such an impact so soon after its introduction as the Beltex. The initial reaction from UK farmers was amusement, then amazement that so much meat could be packed into such a small-framed sheep, particularly when Beltex lambs started to monopolise the silverware in prime lamb and carcase competitions. Between 1991 and 1995, the Smithfield Reserve Supreme live championship went to David Gardiner’s Beltex no less than three times before he finally clinched the trophy in 1996. In 1994, just five years after the breed’s arrival in the UK, Beltex lifted the triple crown of supreme carcase championships with Robert Smith’s triumph at Smithfield, Matthew Hamilton at the Scottish Winter Fair and D & A Bishop at the Welsh Winter Fair, not to mention the Bishop’s Supreme live championship at the same event. Engravers have been kept busy ever since, adding the names of Beltex exhibitors to the silverware from all the major prime lamb and carcase competitions.

In 1995, the Royal Welsh Show became the first of the four Royals to include classes for Beltex which were judged by Mike Mulgrew. He awarded the championship to Rocky, an imported shearling shown by John McIlwraith and Gavin Shanks, which went on to win the championship at Carlisle the following month and sold for 2400gns. The McIlwraith and Shanks partnership repeated their success the following year at the 1996 Highland Show where Shogun, a two-shear Belgian-bred ram emerged as champion from among 38 entries which were judged by Ian Maxwell from Donegal. 1996 was also the year of the first Beltex classes at the Royal Ulster show where judge Robin Slade chose Ardstewart Ulrika, a shearling ewe shown by Wade McCrabbe. She repeated her success the following year when the classes were judged by Tom Ashton. The Beltex breed finally made its appearance in the Royal Show ring in 1998 where they were given only two classes, male and female. Some 47 entries went under the critical eye of the judge, David Gardiner and the red, white and blue ticket went to the Belgian-bred ram Viagrow shown by John McIlwraith.

The current record price for a Beltex ram stands at 65,000gns and was achieved in 2018 when Scottish breeders, Neale and Janet McQuistin, sold their shearling ram, Airyolland Castro, to Paul and Christine Tippetts for their Hackney and Wilodge Flocks. The previous record of 60,000gns was set two years previously in 2016 when the same breeders, Paul and Christine, paid that for Grant and Gemma Anderson’s shearling ram, Topflite Al Pacino. Ram lambs recently surpassed the previous best when Richard Wood sold his Kingledores Crusader for 27,000gns to Wade and Alison McCrabbe, of the Ardstewart Flock in Ireland. The female record was set back in 2010 when Glen and Heather Forsyth received 7800gns for Corra Natasha from Paul and Christine Tippetts.

The first edition of the Beltex Journal was published in 1995 and incorporated the Irish yearbook. The Journal was edited and produced by Ian Kerr, now CEO of the Limousin Cattle Society. Its 24 pages were in black and white and 123 breeders were listed in the directory. The front cover featured Showgirl, a shearling ewe owned by William Carson and bred in Belgium by Jacques L’Ohest. She was champion at the 1995 Irish National Show and reserve champion in 1996. Showgirl was the dam of Downkillybegs Viper, stock sire of the Downkillybegs and Ardstewart flocks. 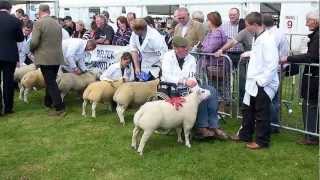