It was a triumphant start to the winter prime lamb show season for Beltex-bred lambs when a pair from the Hall family at Inglewood Edge claimed the Supreme Championship honours at the Borderway Agri-Expo, on 29 October.

Not only was there a large entry in the two Beltex-sired classes, but many of the top lambs in the non-breed specific classes were also by Beltex rams.

Taking the top ticket was the winning pair from the 11-strong heavyweight Beltex class which had previously won the Continental Championship for John Hall, shown by daughter Joanne and stockman Johnny Aiken. Sired by the Faughhill El Capitan ram bought at Lanark last year, they are out of three-quarter Beltex ewes and secured the Hall family their fourth Championship at the Agri-Expo.

Judge, Stuart Wood, who runs the Woodies pedigree flock in Aberdeenshire, commented: “It was a tremendous show of lambs and the quality of Beltex lambs throughout was outstanding. The Champions were a proper pair with a real good loin, great gigot and width throughout.”

The Halls also landed the Reserve Supreme honours with a duo also featuring Beltex breeding on their dam’s side. 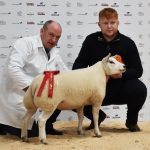 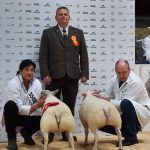 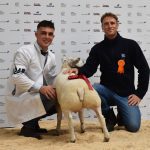 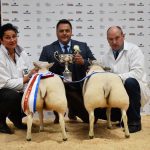