Making it an English Winter Fair debut to remember was Rebecca Armstrong, from Monkshide, Ledbury, with her pure-bred pair of lambs which went on to win the Supreme Championship at the event on 20 and 21 November.

The pair of wether lambs are by the Corstane Easy-Osie ram bought the previous year while the dams are registered Beltex from Rebecca’s small Armstrong flock. Tipping the scales at a combined weighed of 96kg, they sold for £600 apiece to the judge, Matthew Prince, of Highfield House Farm Shop, and killed out at 30.5kg with E3L grade, and 31kg and E3H.

The Reserve ticket went to Robert West, Stamford, with his Champion pair from AgriFest South West – a pair of wether lambs from the trimmed butchers lambs section which were by the Booden Cooper ram bought from Newark and out of home-bred Beltex cross ewes. They weighed in at 53kg and sold for £340 apiece.

In the carcase section, David Wadland secured both the Champion and Reserve tickets, taking the Championship with an E3L carcase weighing in at 30.9kg while the Reserve was a 23.2kg E3L carcase. 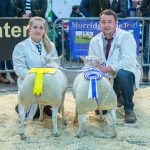 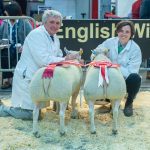 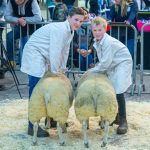 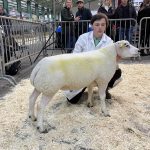