Producing improved lambs to meet market demands that sell sooner and for a better price was the reason for the switch to Beltex-sired lambs at Low West House Farm for the Beveridge and Cowton family.

Gerard Beveridge bought the 227-acre site on the edge of Tow Law, County Durham, back in 1964 and has slowly built the acreage up to number 720 acres which he runs with son John and daughter Helen alongside her partner, Peter Cowton, and their son, Ben.

It’s a busy operation as alongside the 140 British Blue and Limousin cross suckler cattle, which produce suckled calves sold in the back-end of the year at Darlington and Hexham marts, is a flock of 720 commercial ewes. 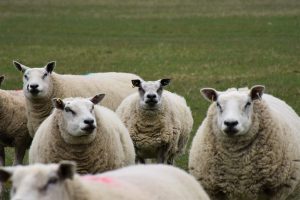 It is this flock of ewes that is Ben’s passion and, having been of Mule breeding in years gone by which were covered with Texel rams, he persuaded the others that Beltex genetics were the way to go and they’ve been slowly introduced.

“I was keen to use Beltex tups for a while as they produce better lambs that are away sharper and sell for a better price,” points out Ben, adding most of the flock females are now Texel cross Beltex. “We started with Beltex cross tups to see how they went and still have a few Texel tups about but will fizzle these out and use all Beltex in the next few years. Grand-dad and dad were sceptical to begin with but are seeing the benefit now.”

“Lambs are better fleshed and get to that stage a lot easier, with more consistent packets to sell which is what the buyers want. They lamb well too – I was told we wouldn’t be able to lamb them but we’ve not had any problems and lambs are a heck of a lot faster than the Texel to get up and go,” he adds.

The first batch of lambs are typically away in the first week of August with a target weight of 38kg to 40kg having been finished off grass, with the majority of the later draws finished off grass alone and some hitting the 42kg mark. The last lots are away at the end of March before lambing starts at the beginning of April, and are finished on a hogg fattening ration.

The 2018 crop averaged £87 for the whole lot which was an increase of £4 per head on the previous year, with James Curle buying more than 600 of them for Vivers, telling Ben ‘as long as you keep fetching them I’ll keep buying them’.

“But we won’t send lambs to market unless they’re spot on and although we try to sell every week, we don’t mind holding some back for a week to make sure they’re right,” saysBen.

“There’s not many lambs sell at Hexham to hit that weight for the foreign market, so we’ve gained a lot from selling there. The Beltex is the only breed to make the export weight and grade, you can’t do it with the Texel as they don’t get fit enough at that weight, so the Beltex is just what the market wants and if you want the premium you’ve got to breed it.” 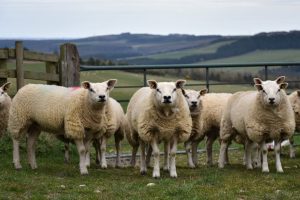 As well as regularly receiving the top price at auction markets, the family has done well at some of the Christmas prime lamb shows and sales as well as at the local Wolsingham Summer Show, highlighting the need for Beltex breeding in order to do well in fat lamb competitions.

The champion pen of five at last year’s Christmas show at Hexham, which sold for £120 apiece at 37kg, included two by a Woodies tup and another by an Airyolland sire.

These stock rams are predominantly bought at Kelso Ram Sales as well as privately from Robin Williamson’s flock based in Hamsterley, near Bishop Auckland.

“Tups have got to be solid with good skins. I like the good, hard-muscled tups and for them to be blue and bare – I was told the blue sorts always get the better lambs,” comments Ben, who is willing to pay up to £1500 for commercial rams and does a lot of research into pedigrees before buying.

As well as breeding for the fat market, the family retains some 30 to 40 ewe lambs each year to join the breeding flock, and buys in a further 20 Beltex gimmer lambs and 150 gimmer shearlings.

“I’m pretty strict on what we keep for breeding so any ewes with problems are sold on, meaning we’re getting fewer problems. We were bad for getting mastitis but this has improved with the Beltex-bred ewes and lameness is improving too,” says Ben.

The Beltex has cemented its place at Low West House Farm thanks to the breed’s ability to produce lambs with improved carcase qualities, and with a pedigree flock in the early stages it can only go from strength to strength.