It was a dream debut at the Welsh Winter Fair on 29 and 30 November for Stamford’s Robert West when he triumphed over the other 390 pairs entered to secure the Supreme Champion title with a Beltex-sired pair at the event in Builth Wells.

Marking a very successful first trip to Wales after landing the Reserve Supreme honours at the English Winter Fair at Stafford in the weeks previous, Robert and his girlfriend, Lydia Taylor, first led the nine class winning pairs in the Butchers’ section before going on to win the Supreme Championship with his duo that tipped the scales at a combined weight of 82.5kg. Sired by Booden Cooper, a ram bought a couple years previously at Newark, and out of three-quarter Beltex mothers, they went on to sell for £1250 per head in the auction for the duo from Park Farm, Collyweston.

“The Champion pair are exactly what the market is wanting – they’re the right weight for the price per kg live trade and hit the right specification of 22kg deadweight. They’re an outstanding pair and very well presented,” commented the Championship judge, Paul Slater, of the noted Whiteley Hey flock near Adlington, Macclesfield.

These thoughts were echoed by the judge of the classes on the Monday, Jimmy Mulholland, from Great Orton, Carlisle, who said they were the most outstanding pair he’d handled all day.

Taking the Reserve Supreme honours were the Reserve Butchers Champions from the Hall family, Inglewood Edge, Carlisle. Brought out by Joanne Hall and daughter, April Skelton, this winning pair from the untrimmed wethers class are by the Faughhill El Capitan ram that also sired the Borderway Agri-Expo and LiveScot Champions, and went on to realise £300 per head at a combined weight of 88.5kg.

Mr Slater added: “The Reserve Champions were a similar pair and I picked them over the heavier lambs as they’re at the weights the trade requires. They have the best loins I’ve handled today.”

Beltex-sired lambs also led the way in the Carcase Competition with the Champion Single coming from the Blandford family, Netherton Farm, Eastnor, Ledbury, who have now won the Singles section a third time in the last five years. This 25.1kg carcase graded E3L and killed out at 60% having weighed 42.5kg live. Sired by a home-bred Beltex ram, it later sold for £2200.

Surpassing that when selling for £3700 was the Reserve Champion Single and Best Bred in Wales from Mr and Mrs Owen and Rachel Watkins, Hay-on-Wye. This carcase also graded E3L, this time at a weight of 21.6kg, and was sired by a Beltex ram bred by Rachel’s brother, William Gittoes.

Landing a first Pairs Championship having previously won Reserve, was the Davies family from Danyreglwys, Garthbrengy, Brecon. This duo by a Wannop’s ram weighed 21.1kg and 21.2kg deadweight, both graded E2 and they realised £500 apiece. 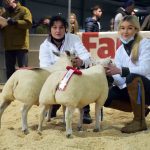 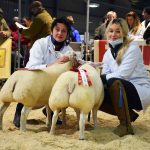 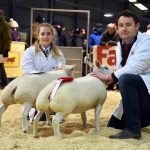 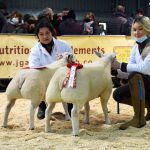