At the Irish Beltex Sheep Breeders Club In-Lamb Christmas sale at Dungannon Farmers’ Mart in December a special presentation was made to Kinawley-based Beltex breeder, Matthew Burleigh, for setting a new auction record price of 45,000gns for his ram lamb, Matt’s Flash Harry ET at the Beltex Sheep Society’s Premier Sale of rams and females at Harrison and Hetherington’s Borderway Mart in Carlisle (13 -15 August).

Making the presentation of the Smyths Daleside trophy was Irish Beltex Sheep Breeders Club Chairman, Eddie O’Neill. The record was set back in August when the ram lamb was sold to Paul and Christine Tippetts, of the Hackney and Wilodge flocks, Shropshire, with Richard and Jamie Jerman, Brilley, taking a one-third share. 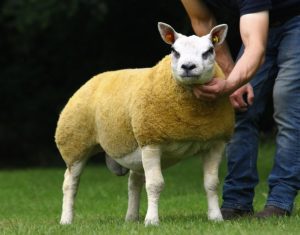 The February-born embryo is by the 11,000gns Kingledores Edmund bought in 2019 in partnership with Andrew and Jamie McCutcheon’s Bodoney flock, while his dam is Matt’s Do Nut, a Hackney Corker daughter bred from one of the best ewes in the flock, Matt’s Adelle.

“I was looking for something with a bright outlook and plenty of lift as well as great character, carcase and muscle, and he has it all,” said Paul of his purchase. “He also has a lot of Hackney breeding in his background being a Corker grandson and going back to Hackney Warrior, so it’s good to get some of our proven breeding back.”

Matthew Burleigh is no stranger to winning ways with his Beltex sheep.

“I’ve always had an interest in breeding and Beltex was always a favourite, even when I was a young boy,” explained Matthew. “I became familiar with the breed in the early 2000’s when my father, William, used to run a Beltex ram with his commercial flock to breed prime lambs.

“The attraction was the double muscling and the top carcases that were produced. I also like the character of the breed, the skin and the commercial appeal.”

Matthew started out with three ewes and as he added to his flock he took the decision to turn it into a commercial enterprise. Today he has 45 pedigree Beltex ewes which he and his father look after together with Blue Texels, suckler cows and a cross-bred flock.

Prior to Matt’s Flash Harry ET’s success at auction Matthew’s previous best price was 12,000gns for Matt’s Abracadabra at Carlisle back in in 2015, when again he had the top-priced ram lamb on the day. Also scoring well in terms of auction success was another ram lamb, Matt’s Ducati, which achieved 10,000gns at Carlisle in 2018 with the added bonus of being named Champion on the day.

“That was also very pleasing as that took place at the biggest ever sale of Beltex sheep to date,” continued Matthew. 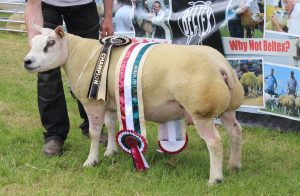 “One of my most memorable days was winning the Irish National Show with Matt’s Actress, a one crop ewe in milk in 2017,” said Matthew. Matt’s Actress went on to take the Inter-breed title that day when the ‘Nationals’ were held at the Armagh show.

“To date, I feel she’s the best sheep I’ve ever bred,” added Matthew.

Nevertheless, the 2018 National Show was also particularly memorable when he won all the female classes as well as the Supreme Champion title in what was a very strong showing of sheep.

Back on the farm and Matthew’s target times for lambing are February and March in a few batches.

“Flushing can be up and down, but normally we average around eight pregnancies per flush,” he added.

While 2020 has been very challenging Matthew is delighted with the interest that has been shown in breeding stock.

As well as Covid, Brexit has been another major concern.

“Personally I think it has been a shambles,” continued Matthew. “How they think it will work, I don’t know. Time will tell, but I do believe it will affect all breeders businesses, both here in Northern Ireland and throughout the United Kingdom.

“Let’s hope the restrictions to Northern Ireland can be relaxed and operationally everything can start running smoothly again.”

With the future in mind Matthew is aiming to continue with winning ways and like all Beltex breeders the bar is set high.

“I would like to breed the perfect sheep,” he concluded.

Well Matthew, you have a good starting point with the Beltex breed!

Thanks to Incorporated Images. 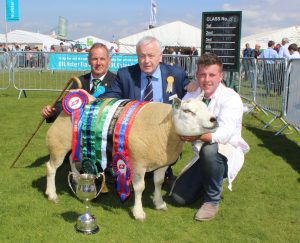