It is a name that hit the headlines in the last year by setting a new breed record of 65,000gns for a shearling ram named Airyolland Castro, but the Airyolland flock of Beltex has long established a reputation for breeding what those in the industry would call good, honest sheep.

That’s because of dedicated years of breeding and following strong family lines by Neale and Janet McQuistin, whose flock of 170 breeding females run on what wouldn’t typically be described as good Beltex ground high on the hill near New Luce, Newton Stewart, in Dumfries and Galloway. 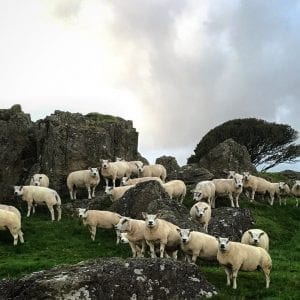 The first batch of 11 Beltex gimmers arrived at Airyolland in 1998 following Neale’s visit to a Belgian breeder living in France, where he saw Beltex-sired lambs running behind some Scotch Mul

es he had previously exported and saw the potential of using that type of ram.

Sadly, this initial import was lost during the Foot and Mouth outbreak in 2001 but as Neale and Janet were so taken with the breed they imported around 60 females for themselves as well as more for other breeders. These were selected from flocks they had visited in Belgium and were organised through Willem Verberckmoes, who became a good friend to the duo. It is from this group that the five families now found at Airyolland have descended from.

The initial aim was to breed strong commercial tups for Kelso Ram Sales with a focus on a good backside and skin rather than a pretty front end and head, although they are more that capable of producing that too. After a successful few years at Kelso, the duo welcomed a ‘fleeing’ trade at the Premier Sale at Carlisle but made the decision not to lose focus of the Kelso market.

“We’ve found you can’t just breed the one type of Beltex so we produce all sorts – the wee muscly ones, the taller, rangier sorts and everything in between,” pointed out Janet. “There’s definitely room for all those types as the breed is used on so many different types of commercial female. That’s the benefit of knowing family lines and balancing the breeding to produce a ram for everyone.”

Although Janet is able to tell you the traits and lineage of any animal in the flock – such as the ‘infidel’ family that produced Castro being more feisty than the others, or the ‘musical’ family that has produced strong females such as Rihanna – it’s not just the McQuistins that are making the most of their breeding stock. They have almost made a market of their own as females are sold on once they have bred four crops of Airyolland lambs and go on to produce several more crops for fellow breeders. 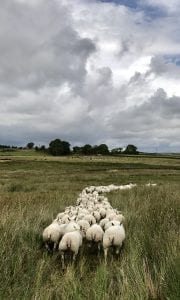 “We have a large flock with a large number of females to reach that stage so we’re quite strict on what makes a breeding ewe,” p

ointed out Neale. “This means if a ewe gets to five years old, still has a good bag and teeth, is from a good family and has raised lambs every year, then we feel we have a fairly good product to sell.”

While it may be commonplace to flush around 10% of a pedigree flock, the McQuistins take a different view in that only four females make the flushing team with three and four-crop ewes that have proven themselves as good breeders and are still hale and hearty in every way taking centre stage. The remainder of the flock is AI’d and many home-bred rams are used, evident in the fact that Castro boasted seven direct home-bred sires in his pedigree.

Further proof was seen in the pen of 10 shearling rams sold at the Premier Sale, of which only one was bred by ET, as well as the sole ET-bred ram on offer in the pen of 18 shearlings at Kelso.

It’s not just at recent sales that the Airyolland flock has caught the eye as in 2004 Airyolland Galahad set a breed record for a shearling ram at the time of 13,000gns. Females have met a strong demand in the sale ring too as Airyolland Andromeda was knocked down for 7,500gns at the Beltex Beauties sale in 2016.

They’re not chasing the high prices however, as they’ve not turned a sheep out of the ring unsold since 1998 and everything goes to a sale to sell. This might have cost them with a couple of tough years, but it’s all about gaining customers and an impressive after-sale service means these customers often return. 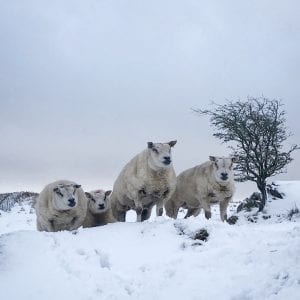 “I always feel very privileged when someone buys one of our rams to use on a pedigree Beltex ewe – in the back of my mind our buyer is the commercial man, so any pedigree buyers are a bonus and it’s just as rewarding to see our rams do well for other producers,” Neale commented.

As with most things in the industry it’s a case of swings and roundabouts as Neale notes that while it was their most successful sale season to date, it was their least successful in the show ring as it was the first year they returned home from Wigtown and Stranraer Shows without a red rosette.

But, as Janet points out, they don’t feel the need to win shows as they’re aiming for the sale season. That being said, they do like to pit their stock against fellow breeders, particularly in such a strong area for the breed, and like to promote both the breed and their flock as shows act as a great shop window.

They may have given a lot to the Beltex breed over the years, but for the McQuistins it’s all about what they have received back in return.

“That’s the best,” said Janet, “the craic at sales and the fact everyone is so keen to promote the breed, not just themselves. There’s a real passion for the breed and the premium lambs it produces.”