Rough hill ground in the south of Scotland may not be where you’d typically find Beltex sheep, but the Cavers family is making a name for itself by producing winning Beltex-sired lambs out of South Country Cheviot stock females.

The Southies themselves have won twin brothers, Neil and Elliot, plenty of accolades over the years but it’s the cross of a Beltex ram on to a native Cheviot female that has really got them noticed at events such as the Borderway Agri-Expo.

They’re not just a novelty though and have got to pull their weight in the busy family farming operation which covers three neighbouring units – the 700-acre Hoghill, the 1400 acres of Sorbie as well as 1100 acres at Murtholm.

After stock in the entire Ewes valley was devastatingly wiped out with the Foot and Mouth outbreak, the Cavers had to build up their numbers and started with just a few ewes and a couple collie dogs. Now, there are 1100 South Country Cheviot and 560 Blackface ewes alongside 100 commercial Aberdeen-Angus cows and, of course, 30 pure Beltex ewes. 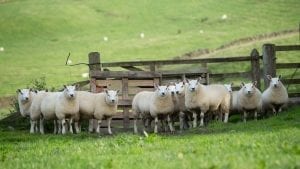 “We started using Beltex nearly 10 years ago having previously used Texels. We looked to them for easier lambing as if there was a big single in our 360 in-bye cross ewes they could be hard to lamb, but we’re not finding that with the Beltex,” points out Neil, who resides at Hoghill with wife Elaine, and son Glen, with twin daughters not far from home with Kathryn now living in Langholm and Lauren having recently moved near Penrith.

“Now all our in-bye cross ewes are Beltex cross Cheviot as we found some Texels were getting too big for the ground here and the Beltex is better suited to our hill females. That and the buyers at markets don’t want lambs over big. This year especially, when selling at Longtown, the smaller lambs up to 45kg are £10 to £20 dearer than bigger lambs at double the weight.”

Those were backed up by statements from Elliot, who lives with wife Aileen, while their children all stay on the estates – eldest son Alasdair, and daughter Rhea, live at Murtholm, while younger son Sandy resides at Hoghill Cottage. Both Neil and Elliot admit they are lucky to have the next generation all living close by who are on hand and willing to help at busy times should the need arise.

“Beltex rams seem to cross well with any type of sheep and we’re getting far better lambs out of the South Country Cheviot than we ever thought we would. They don’t need to be big, just have plenty shape,” says Elliot. “Any lesser or plainer ewes on the hill go to the Beltex and we breed the best hill ewes pure. This means we’re making money out of something we don’t necessarily like, which could be up to £20 more per lamb.”

As well as reaping the rewards for their South Country Cheviots – which have won many a supreme accolade at summer shows with breeding tups selling to a top of £3,400 – the Cavers have done well with their Beltex-sired lambs, mainly at the Borderway Agri-Expo where they have won the class for lambs bred out of a hill ewe on four occasions. 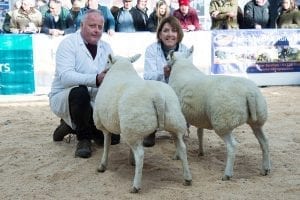 “You almost get addicted to showing and if you get a ticket that is a huge bonus, and it sure helps when it comes to selling your lambs,” says Elaine. “They attract a lot of interest every year at the Expo, it’s a good place to showcase your lambs and folk get to know them for buying at the market. Even some Welsh breeders have been asking about them and can’t believe they’re out of Southie ewes.”

In order to produce these show-winning lambs, the Cavers are looking for tight-skinned and hardy sorts of rams, preferring the bluer sorts to the pinker types to get a sharper type of lamb for showing. That being said, they’ve not to be bare-skinned as they have to survive in the harsh conditions.

“That’s the thing about the Beltex, you don’t need to spend a fortune on tups to breed quality lambs,” points out Elliot. “Yes, you’ve got to buy the right kind but the answer is not to buy over-forced ones, and with the South Country Cheviot ewe you get sharper lambs with good heads for showing which does make a difference.”

These cross-bred lambs sell well in the auction ring too with the first draw of finished lambs typically away in early September. These top draws averaged £84.60 at Longtown, with both brothers pointing out this was a decent price for the time of year but Beltex lambs always sell at a premium.

“We usually sell lambs weighing 38kg to 44kg to hit the export market, which the Beltex achieves easily,” says Neil, adding the tail-end of lambs sold at Longtown in early March to average £111 at 35kg.

Such is the family’s confidence in the breed that they invested in pedigree females a few years back and now, thanks to a large number of twin ewe lambs, have 30 to lamb in 2019. These were initially bought to breed their own stock tups to use at home but with 11 tup hoggs coming through there will be a few on offer at upcoming breeding sales.

“It really makes a difference using your own tups as they don’t take a knock when brought home on to harsh ground having been pampered prior to a sale,” highlights Neil, adding the modern type of Beltex is more muscular and grows larger than in days gone by. “That being said, we do buy two or three tups each year at the Premier Sale and they’re given plenty of time to adapt to the ground here as they’re not put to work until mid-October.”

While the native sheep and cattle may be the main focus for the Cavers family, it’s the Beltex-bred lambs that are paving new paths and proving their worth on the busy hill units.

Thanks to The Scottish Farmer for photos.