Two newcomers to the Beltex breed have been touched by the support they have received from fellow breeders while setting up a new flock in memory of their daughters.

Having sadly lost their two daughters, Esme and Lilly, at just 22 weeks in the past three years, Ashley Pickford and Teri Smith decided to honour their memory with a flock of Beltex under the Esme Hope prefix – so called as Hope was the middle name of both girls. Since January 2018, they have welcomed 22 breeding ewes to their flock, aided by kind donations from breeders who heard of their mission.

One such breeder was Stuart Wood, of the Woodies flock, who gifted an in-lamb ewe in December last year while Chris and Laura Beck donated a ewe lamb from their Beckbred flock, as did Robert Rennie and Becka Oldham from their recently dispersed Robex flock. 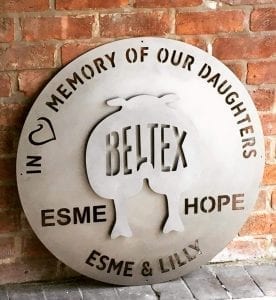 “Every year we will donate 30% of the income from sales of our sheep to the three charities that have really helped us during this difficult time – the Stillbirth and Neotal Death Charity known as SANDS, 4Louis and Aching Arms,” explained Ashley.

SANDS offers support to couples to help process their loss while Aching Arms gifts a teddy bear in memory of someone else’s child as a keepsake and 4Louis puts a gift pack together contains a candle, two teddy bears, a balloon to release and information on the help and support available.

“These charities helped us massively and we want to give back as much as we can. What we hope to achieve is to show others in similar situations that there is help and support out there in these difficult sitations. The support we’ve had from breeders has been fantastic,” said Ashley.

With the flock growing quickly to the current 22 breeding females and nine ewe lambs coming through, Ashley and Teri hope to build numbers up to around 40 or 50 females.

“Teri always wanted sheep and I thought if we’re going to do it then I want shapely animals that sell well and that the butchers are after, and the Beltex ticks all the boxes,” added Ashley.

The duo will aim their sheep for the Premier Sale at Carlisle in August, but also welcome private sales. They hope to showcase their flock during the 2019 show season and welcome anyone looking for more information, with their Esme Hope Beltex Pedigree Facebook page kept up to date throughout the year.