A total of 21 sheep went under the hammer at the Irish Beltex Sheep Breeders Club Ballymena evening sale with the top price on the night being 500gns for Lot 16, Glenview Ernie, a shearling ram from Omagh-based Sean Daly. A twin, Glenview Ernie, which was purchased by John Hunter from Glenarm, was sired by Sheephaven Casanova and is out of Glenview Claregate. 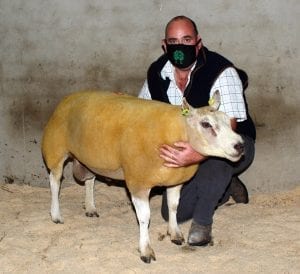 Sean Daly also had the top-priced aged ram on the night, 400gns paid for Lot 2, Glenview Ding-Dong. This strong ram was purchased by Martin McKillop, Loughgiel, Ballymena. Again sired by Sheephaven Casanova the dam was a home-reared ewe, Glenview Bubble.

Also going for 400gns was Lot 3, Ashley Ed, a shearling ram from Banbridge-based Allen and Vicky McFadden. Purchased by F McEldowney from Draperstown, this well-shaped shearling dam was sired by Artnagullen Worzel ET and out of a Van’t Hoveke ewe. 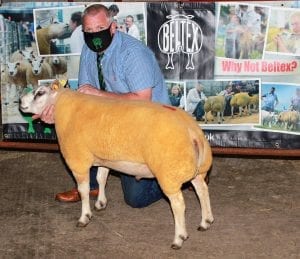 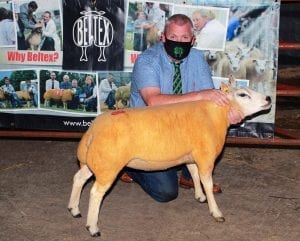 Top-priced shearling ewe was Lot 18, Lagyveagh Erica from Hugh O’Neill – purchased by B McLean from Tobermore, for 320gns. The sire is Munreary Concord ET and the dam Lagyveagh Amber.