There was a strong demand for Beltex females at the Society Sale at Beeston Castle, where a shearling ewe from Stuart Woods’ Aberdeenshire-based Woodies flock topped the entry at 1,600gns.

The sale leader was a bought-in gimmer named Bryngroes Cyw ET, which was bred by AT Davies and sold to DF Hughes, Bethesda Street, Amlwich, Gwynedd, for that 1,600gns. Full of Woodies breeding – being by Woodies Bachelor and out of the Woodies Snoop Dog-sired Woodies A Touch of Class – she changed hands scanned with a pair to Woodies Bojangles having already reared a pair as a ewe hogg. 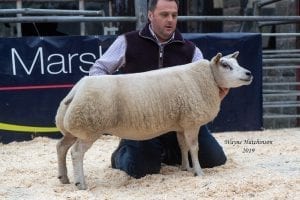 Following on at 1,500gns was the champion from the pre-sale show, a ewe lamb named Wilodge Donna from the Tippetts and Wilodge team from Shifnal, Shropshire. Selling to J Jerman, Brilley, Whitney-on-Wye, she is by the former breed record holder at 60,000gns, Topflite Al Pacino, and out of an imported Van’t Rozenaken dam. 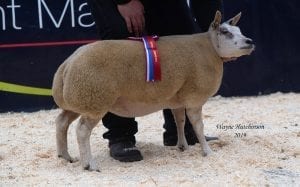 In what was a good day’s trading for Mr Wood, entries from his Woodies flock secured a further six of the top prices. At 800gns when sold to HW Williams, Glanrafon, Corwen, was the first prize  shearling ewe and reserve champion, a substitute entry named Woodies Champagne ET. Sired by Woodies Snoop Dog and out of an imported ewe, she scanned in-lamb to Airyolland Choco. 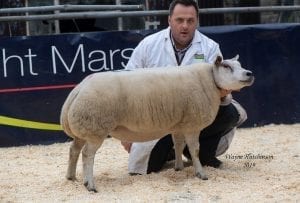 D Gallagher, Richmond Lane, Ballegelley, County Tyrone, paid 650gns for Woodies Date ET, a ewe lamb sired by the 2,400gns Woodies AC Milan and out of a V/D Harlembois ewe. She stood first in her class at Turrif and Echt shows last year.

At 600gns was another from Woodies, this time Withy Trees Appollina, a 2015-born ewe bred by AJ Wood and again full of Woodies breeding, being by Woodies Storm and out of Woodies Raindrop. Scanned in lamb to Aviemore Casinova, she sold to CR Parry, Beaumaris, Gwynedd.

Matching that 600gns when knocked down to G Evans, Mynydd, Cerrig, Llanelli, was a recipient ewe from Mr Wood carrying a single embryo by Woodies Cookie Monster out of Woodies Cleopatra.

There were three more 500gns sales with the first two from Mark and Ellie Jennings, Selside, Kendal, both selling to HF Jones, Bryn, Nantmawr, Oswestry. First was Wiskers Balley Dancer, a 2016-born Dooley Ruthin daughter bred by AC & SA Hutchinson and bought when she stood champion at Skipton in-lamb sale back in 2016. She was carrying a pair to Hallcrake Colonel.

Ian’s Alisha, a 2015-born daughter of Munreary Total Wipeout, was the other 500gns sale from the Jennings that sold to HF Jones. This second prize ewe was also scanned with a pair, this time to Dooley Bomer.