A Shearling Ewe from Andrew Morton and family went all the way at the Beltex Scotland show and sale of females at Lanark when she first secured the Supreme Championship before selling for the top price of 1250gns.

That leader was Mortons Caffe Latte, a daughter of the 10,000gns Kingledores Battleaxe out of Mortons Rhianna, a Beachy Norman daughter from the flock near Denny. Backing his decision, she was bought for 12,50gns by the judge, Ian Reid, of the Osprey flock, Methven, Perth, carrying a pair to Hillview Charlie.

Just behind on 1200gns was the dearest from Andrew Baillie’s Callacrag flock from near Lanark. The Aviemore Black Spot-sired Callacrag Caroline is out of the Clary Navy-sired Callacrag Tampon, and was scanned with twins to Quarrymount William Wallace. She sold to the Firm of Tom Moffat, Biggar.

The same buyer and seller combination was behind a further two at 820gns and 700gns. Dearest was Callacrag Cassie, another by Aviemore Black Spot and this time out of the Quarrymount William Wallace daughter, Callacrag Amarylis. She was due with a single to Broxty Bruiser.

At 700gns and offering some different breeding was Callacrag Claudia, by Eildon Wolverine and out of a Langlands Rainbow Warrior daughter. She was also scanned with a single to Broxty Boxer.

The first in from Richard Wood, Kingledores Carrie ET, realised 800gns for the flock near Broughton, Biggar. Sired by Hackney Atlas and out of Kingledores Starlight, she was carrying a single to Bailey Brook Chief and heads to a new home in Wales with CR Parry, Beaumaris, Gwynedd, Anglesey.

Selling for 750gns to M Russell, Lamington, Biggar, was the second prize Shearling Ewe, Kenny’s Crystal ET from K O’Connor, Carstairs Junction, Lanark. Scanned with two to Broxty Bruiser, she is by Aviemore Brutus and out of Kenny’s Avalanche. 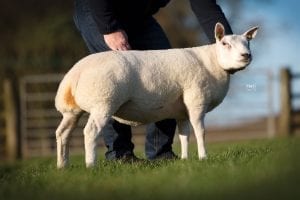