Beltex males and females met a near 100% clearance at the Beltex Sheep Society’s final sale of the autumn season at Harrison and Hetherington’s Borderway centre on Saturday, 26 September, where a ram lamb from Jonathan Aiken’s Vogue flock topped the trade at 6500gns. More sheep changed hands compared to the 2019 sale and averages improved in all sections with ram lambs meeting a particularly strong demand to level at £1098 for 32, an increase of more than £250 per head on the year. 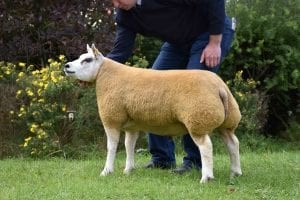 Selling for that top price was Vogue Fastrac, a ram lamb from Jonathan Aiken’s Vogue flock near Hesket New Market, Wigton. Sired by the 10,000gns Clary Desperado that also bred the champion prime lambs at LiveScot last year, Fastrac is a naturally-bred twin born in February out of the Culsh Bourbon daughter, Vogue Diamond. He caught the eye of Aberdeenshire breeders, Stuart Wood, Alan Miller and Colin Mair, who will put him to work in their Woodies, Lurg and Aviemore flocks, respectively. 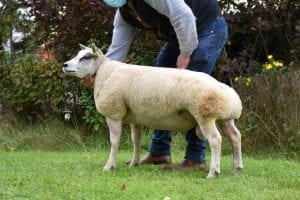 The second best price of 3500gns was paid by Jock McMillan of the Clary flock, Newton Stewart, for the very first lamb on offer, Matt’s Forsaken ET from Matthew Burleigh, Shanra, Enniskillen, County Fermanagh. This March-born son of the 12,000gns Ardstewart Angus is out of Matt’s Charlotte’s Web, a Kingledores Apollo daughter. 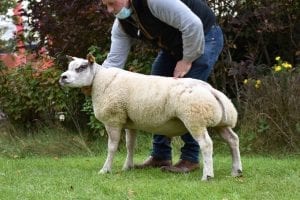 The very next lot from Matthew, another Ardstewart Angus son, sold to Henry Bailey for his Long Lee flock, Keighley, for 2000gns. Born at a similar time to the pen leader, Matt’s Fred ET is bred from Matt’s Angel, this time by Hackney Warrior. 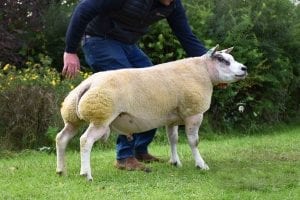 Shearling rams peaked at 2500gns for Alan Miller’s Lurg Elmo ET, a son of the Bailey Brook CR7 ram that has bred well for the Aberdeenshire syndicate that owns him. Bred from Woodies Classy Girl, a Carrigans Bob Lee Swagger daughter from the Aberdeenshire flock, Elmo caught the eye of JG Richardson and heads to work near Bewaldeth, Cockermouth. 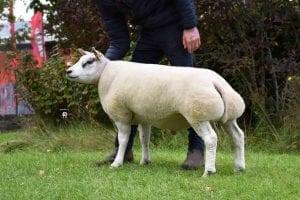 Another lamb to hit the 2000gns mark was Hackney Fantastic ET from Paul Tippetts, Shifnal, Shropshire, which was knocked down to Andrew and Claire Wood for their Withy Trees flock near Whittingham, Preston. Born in January, this embryo’s pedigree features the Airyolland Castro son, Swffryd Eye Catcher, on to Hackney Coco, a Topflite Al Pacino daughter. 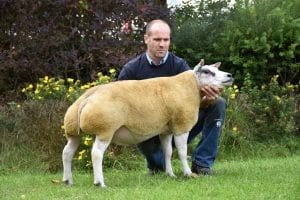 First time consignor Alun Hughes, from Penmynydd, Anglesey, saw his Bryn Gof Enzo ET go under the hammer for 1800gns. Selling to S and M Pickworth, Hexham, his sire is the 3000gns Swffryd Dream On bought for 3000gns as a lamb while his dam is the Kingledores Braveheart-bred Hackney Caribbean, a full sister to the former Great Yorkshire Show inter-breed champion, Hackney Cancan.

Also realising 1800gns was Dafydd Owen’s Smart Ass Fits The Bill, a February-born lamb from the flock at Rowen, Conwy. Bred from a daughter of The Godfather named Smart Ass Alaw, Fits The Bill’s sire is to be confirmed as Kingledores Domino or Clary Dumfries. He joins Brian Wylie’s Balbrydie flock near Kirriemuir.

Jock McMillan saw his Clary Forecast ET sell for 1600gns to Cam Currie of the Corbelly flock, Dumfries. Forecast is by Hackney Braveheart and out of Clary Beautiful, by the home-bred Clary Archie.

Back to the shearling rams and it was a good day for Northern Ireland’s John Ferguson and his daughter Vicky when selling entries from their Vicky’s flock from Comber, County Down. At 1500gns was Vicky’s End of the Line ET, a son of Murrays Crackajack bred from the Glenkeen Sanders daughter, Woodies Athens. Forking out the cash for this lad were AJ and T Snaith who run the Burgh Hill flock near Morpeth.

H and DM Forster, Hexham, paid 900gns for Vicky’s Eddy, this time by Ardstewart Crispie and out of Tiptop Allstar, by Woodies Wots Up Doc.

With all the shearling ewes on offer selling to new homes, females were also in demand. 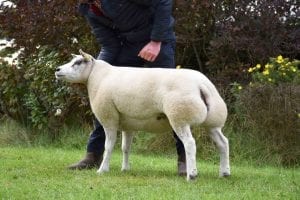 This section peaked at 2000gns for Hackney Elegance from Paul Tippetts. With a strong pedigree featuring the 65,000gns record holder, Airyolland Castro, on to a Scooby Doo daughter named Hackney Chantilly, Elegance was knocked down to Michael Hall buying for young enthusiast Rafe Cartman for his recently established Atherton flock near Skipton. 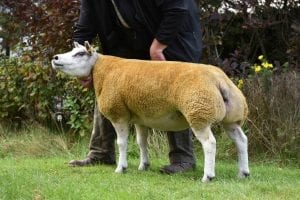 Local breeder Brian Hall continued his good season selling gimmers when his top two made 1500gns and 1200gns, which were in fact full embryo sisters being by the 15,000gns Black Jack Casanova and out of the Woodies Wicked-sired Ainstable Balderdash.

Ainstable Embarrassed ET was the one to make 1500gns when snapped up by Cam Currie for his Corbelly flock while Ainstable Éclair ET sold to H and DM Forster, Hexham, for 1200gns.

Stuart Wood’s Woodies Exporter, an Airyolland Choco daughter bred from a V/D Harlembois ewe from the flock at Westhill, Aberdeenshire, also sold for 1200gns. The buyer here was John Ferguson of the Vicky’s flock.

On the other side of the coin, John topped the ewe lamb trade at 600gns when Vicky’s Felicia ET sold to J and JM Cochrane for their Cochrane’s flock near Darvel, Ayrshire. Sired by Orkney Eurostar, this January-born lamb is out of the Broughton Pound Stretcher daughter, Vicky’s Dutchess.