Two embryo-bred ewe lambs led the Beltex Sheep Society’s ‘Beltex Belles’ entry of ewes and lambs, embryo lambs and empty ewe hoggs at Harrison and Hetherington’s Borderway Mart on Saturday, 22 May, when they were knocked down for 1600gns apiece. 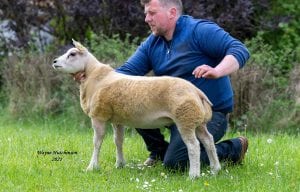 First to sell at that price was Matt’s Golden Girl ET from Northern Irish breeder, Matthew Burleigh, from near Shanra, Enniskillen. This February-born ewe lamb is the first lamb on offer from the 14,000gns Murrays Expert bought at the Carlisle Premier sale last August, while her dam is Matt’s Daisy Duke, a result of the popular flush between Hackney Corker and Clary Whoopi-Do. 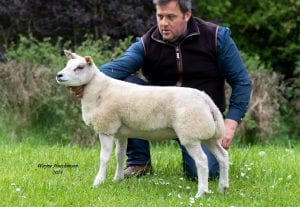 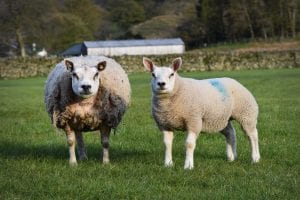 Setting the second highest price of the sale of 1400gns was a home-bred ewe and lamb outfit from Nick Gill and Kayley Kennedy, from near Keswick. Selling to the Society’s veterinary inspector, Neil Laing, for his children, Euan, Fiona and Kirsten’s Perryflatts flock near Thankerton, Biggar, was Nikay Epsilon ET with her first lamb at foot, a ewe lamb named Nikay Gamma. Sired by Broxty Boxer, Epsilon is out of Stonedge Cannes while the February-born Gamma is sired by Swffryd Diplo.

Mr Wood, from Skene, Westhill, had a good run among the ewe hoggs when he topped this section at 1200gns with Woodies First Class, a daughter of the 10,000gns Ryder DIY bred from the noted Woodies Wild Wind, herself by The Godfather. She stays locally and heads to Bow, Carlisle, with Bruce Norman for his Stone Lodge flock.

Four hoggs sold for 800gns, including Woodies Falicity ET and Woodies Final Destiny ET. The former, by Carrigans Bob Lee Swagger and again out of Woodies Wild Wind, sold to Faye Wilkie for her Whitestone flock, also near Skene, while Final Destiny, this time by Woodies Emperor and out of Woodies Cool Chick, sold to F Baird, Charlton, Malmesbury.

Bruce Norman also bought Corstane Forage from Mary Dunlop and son, Andrew, Broughton, Biggar, for 800gns. She is by Ardstewart Aristocrat and out of Corstane Whistler.

The Dunlops received a further 800gns from David Spedding of the Galemire flock, Cleator Moor, for Corstane Finella, this time by Boothlow Enterprise and out of Corstane Cowberry.