FEMALES met a strong demand throughout the Beltex Sheep Society’s sale of in-lamb females and empty ewe lambs at Harrison and Hetherington’s Borderway Centre on Friday, 11 December, where averages improved significantly in all sections as 203 of the 223 females on offer sold to new homes, resulting in a 91% clearance rate. 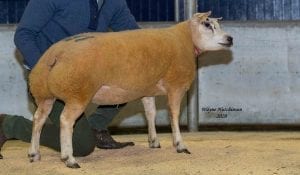 The sale included two reduction sales at it was an entry from Grant Maxwell’s Faughhill offering from near Melrose that topped the trade at 4000gns when Faughhill Eye Candy ET was knocked down to Ellie Miller buying for her newly established Ellies flock that runs alongside her father, Alan’s Lurg flock near Midmar, Inverurie, Aberdeenshire. Eye Candy’s sire is Mortons Cheeky Boy which also sired Grant’s 8000gns Faughhill Elephant In The Room sold at the Carlisle Premier in August, while her dam is the Kingledores Alfie daughter, Eildon Blossom. She changed hands scanned with a pair to Heatheryhall Fireman Sam, a lamb purchased privately earlier this year for £10,000. 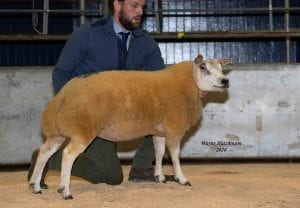 Sticking with the Faughhill Flock and Faughhill Eclipse sold to Gordon Gray, from Lindean, Selkirk, for 3200gns, this time carrying a pair to the 10,000gns Ryder DIY shared between five Scottish flocks. Bred from another Kingledores Alfie daughter in the shape of Eildon Breeze, she is sired Bharangyne World Record. 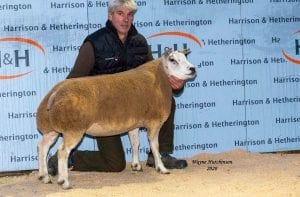 The second highest price of the sale of 3600gns was paid for Rathbone Erica from Mike Davies, Eldroth, Austwick, another that sold to Gordon Gray this time scanned with a pair to the 9000gns Horseclose Eskimo of which a half share was bought in August. Her pedigree features Y Bedol A-Team that has bred well in the Rathbone flock, on to the Dooley Napal daughter, Langlands Sandy.

Ewe lambs met an exceptional trade and the Belvoir View pen from Richard and Rachel Sharp, Grantham, Lincolnshire, proved popular as they sold six to average £2153. Notably, all of these were by the home-bred Belvoir View Diamond Flame, an Airyolland Banzai son. 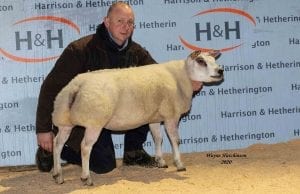 Their dearest at 3000gns was Belvoir View Foxy Lady ET which was knocked down to Victoria Bowring for her Windmill flock, Nether Langwith, Mansfield. Her dam is the Wern Sycharth-sired Corra Agnes. 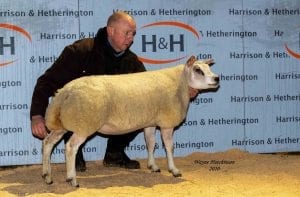 A full sister, Belvoir View Flower Power ET, sold for 2400gns in a two-way split to Jim Kennedy, Lyonpark flock near Maybole, and Kevin Buckle and sons, Jack and Tom, of the Buckles and Broxty flocks near Kirby Stephen. 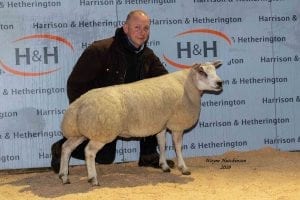 Sticking with the Belvoir View pen and Belvoir View Flower Lady ET was snapped up by James Wannop for his Wannop’s flock near Morecambe for 2100gns. Her dam is Belvoir View Warmfield, a daughter of Sinclair’s Range Rover. 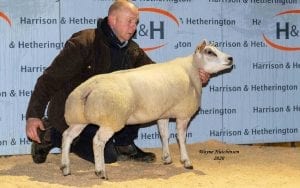 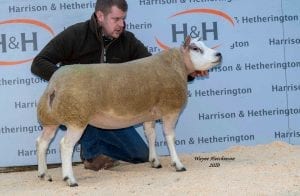 Back to the shearling ewes and early on in the sale, Alan Miller received 2900gns from Andrew and Jamie McCutcheon of the Bodoney flock, near Trillock, County Tyrone, for his Lurg Elspeth ET. Scanned with three to Ryder DIY, she is a full sister to the 5000gns Lurg Ella ET sold at Carlisle in August, being by Bailey Brook CR7 and out of Woodies Classy Girl, herself by Carrigans Bob Lee Swagger.

The other reduction offering from Matthew Burleigh’s Matt’s flock from Enniskillen, County Fermanagh, hit a top of 2500gns for the two-crop ewe, Matt’s Classic ET, which was knocked down to the Findlay family for their Westerdale flock near Whitby, North Yorkshire. Due a single to the 14,000gns Murrays Expert bought at the Premier sale, she is by Hackney Wonderboy and out of the proven brood ewe, Matt’s Adelle, a Hackney Warrior daughter.

Matt welcomed a further 2400gns for Matt’s Essence and 2000gns for Withy Trees Daffy ET. The former, which scanned with a pair to Murrays Expert, is by Hackney Download and out of Dean Brown Bountiful, herself a Matt’s Abracadabra daughter. She heads north to Huntly with Gordon and Lynsey Carroll and joins their Edendiack flock.

Tecwyn Jones paid 2000gns to add Withy Trees Daffy ET to his Seisiog flock near Llanrwst, Gwynedd. Originally bred by Andrew Wood, this Matt’s Coco Pops daughter is out of the Glenkeen Sanders-sired Kingledores Wendoline and also scanned a pair to Murrays Expert. 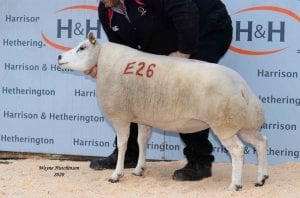 Welsh breeder Edward Lewis paid 2400gns to take Libby McAllister’s Artnagullion Embrace ET home to his Gyffin flock near Conway. Sired by Tercrosset Blaze that has done well in the Kells, Ballymena-based flock and out of the successful brood ewe, Artnagullion TT, a Woodies Snoop Dog daughter, she sold scanned with a single to Belvoir View Dusty.

Another Irish raider, Gary Beacom, from Fivemiletown, County Fermanagh, saw his Lakeview Escape ET sell to Matthew King, Saintfield, County Down, for 2200gns. Carrying a pair to the 7000gns Ainstable Factotum bought at Carlisle in August, she is by Woodies Born To Do It while her dam is Ardstewart Angle, a Rathbone Tony daughter.

Also hitting the 2000gns mark was Tiptop Erika ET from Ali Jackson, Cummertrees, Annan. Sired by Belvoir View Chaos and out of the Hackney Bobby Dazzler daughter, Tiptop Connie, she sold to Hannah Owens for her Cascob flock near Leominster, Herefordshire, scanned with a pair to the privately purchased Matt’s Front Runner. 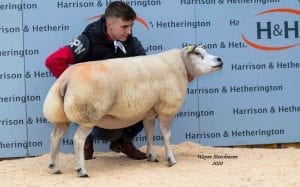