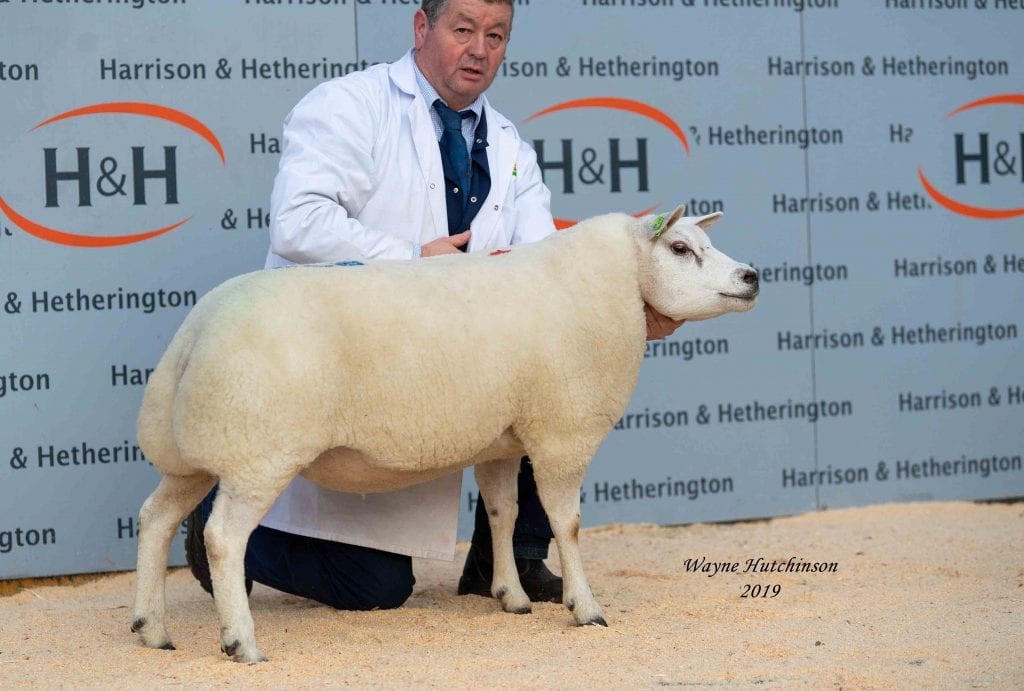 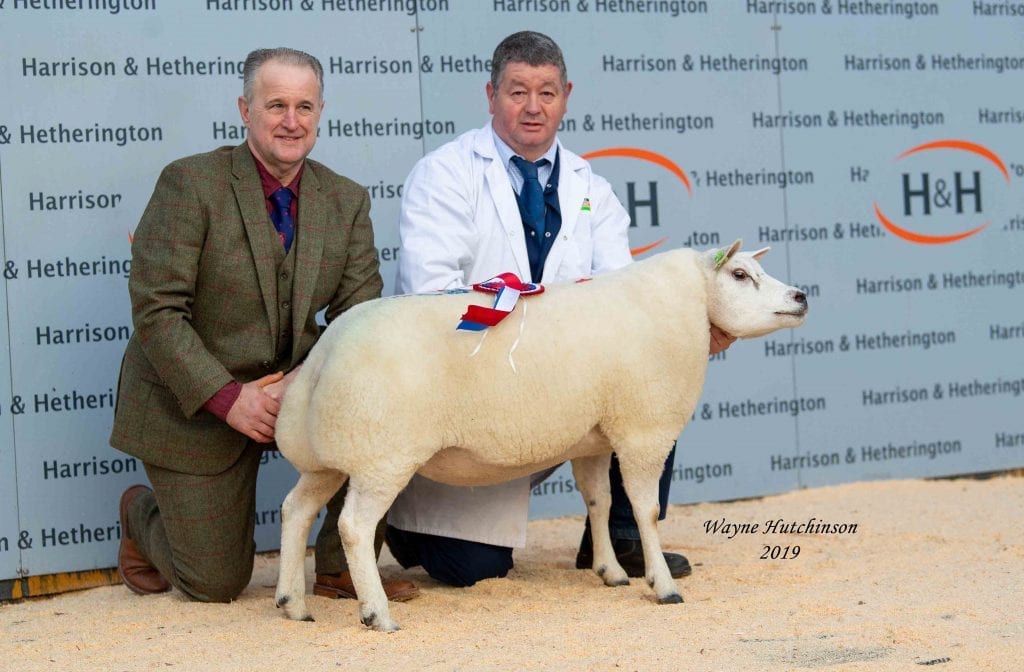 FEMALES reached a top of 4,400gns at the Beltex Sheep Society’s sale of in-lamb ewes and empty ewe lambs at Harrison and Hetherington’s Carlisle centre on Friday, 14 December, where despite averages falling short of 2018 levels, a steady trade was seen throughout.

The Buckles boys – Kevin and sons, Jack and Tom – rounded off a good year having sold the top priced shearling ram and ram lamb of the year as well as winning the championship at the Great Yorkshire Show, by selling the top priced female, Buckles Dream Come True ET, from their flock near Barras, Kirkby Stephen. This fourth prize shearling ewe has some money-making breeding behind her, being out of the Ardstewart Super Mario-sired Buckles Annie Power ET that produced the Buckles’ 30,000gns Buckles Dark Dawn ET sold at the Premier Sale, and sired by Broxty Supreme ET, making Dream Come True a full sister to the £6,000 Buckles Dragon Slayer ET sold at Kelso. Dream Come True sold over the phone to Rory and Pat Machray who run the Bilboa flock near Daviot, Inverurie, scanned with a single to the 10,000gns Gyffin Dexter shared with Andrew Morton. 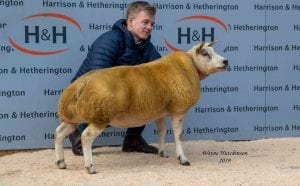 A few minutes earlier another bred from the Annie Power ewe sold to new breeder Donnie Allan, Buchlyvie, Stirling, for 1,200gns. Again in-lamb with a single to Gyffin Dexter, Buckles Desert Storm ET is by Ardstewart Armani and so a full sister to the 30,000gns Buckles Dark Dawn ET. 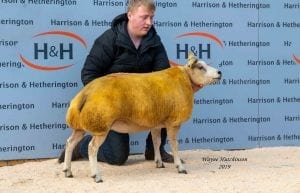 Two ewe lambs sold for 1,800gns apiece with the first of these, Glenpark Emmylou from Kenny and Janice Preston, Dunbreen, Omagh, County Tyrone, selling to William McMillan for his Carse flock near Newton Stewart. This naturally-bred, April-born daughter of the 7,000gns Clary Chief ET is out of Glenpark Batt, an Artnagullion Wonder Man ET daughter. 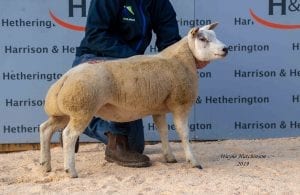 Matching the 1,800gns call was Stuart Wood’s reserve champion from the pre-sale show, a ewe lamb named Woodies Elderflower ET which sold across the water to the Ardstewart flock of Wade and Alison McCrabbe, Gortaquigley, Raphoe, County Donegal. Sired by the home-bred Woodies Cookie Monster ET, Elderflower was born in March and is bred from the Todhall Sumo-sired Woodies Bramble. 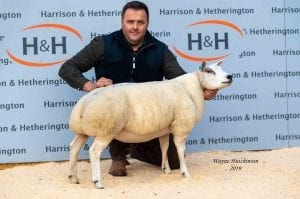 Stuart, from Woolhillock, Skene, also saw his Woodies Ewe Belter ET, a full sister to a 12,000gns ram lamb sold in August, sell to Arwel Davies of the Brynygroes flock near Five Roads, Llanelli, for 1,600gns. Her dam is the Plumtree Wonderful ET daughter, Buckles Babybel ET, which was bought for 7,500gns at the Beltex Beauties sale in 2017, while her sire is the 7,000gns Artnagullion Charlie Chaplin ET.

Also hitting the 1,600gns mark was Clary Dress To Kill, a daughter of the imported Henry V/H Vrijbos from Jock McMillan, Newton Stewart. Out of the Clary A-One ET-bred Clary Blossoming, Dress To Kill sold to Matthew Burleigh of the Matt’s flock, Shanra, Enniskillen, County Fermanagh, carrying a pair to Woodwick Chino.

Mr McMillan topped the aged ewe trade when his first prize Clary Crazy ET, by Muirton Armani ET and out of Clary Thermo ET, sold for 800gns to the Findlay family for their Westerdale flock near Whitby carrying a pair to Woodwick Chino.

An embryo-bred ewe lamb from Matthew Burleigh’s Matt’s flock realised 1,500gns when knocked down to Liam and Jack Swinnerton for their Lipley flock, Market Drayton. Born in February, this lass is full of home breeding being by Matt’s Defender ET and out of Matt’s Avalanche.

Mike and Becki Davis welcomed a good trade for females from their Rathbone flock near Austwick, Lancaster, peaking at 1,400gns for Rathbone Dazzle which sold to Brian Ryder of the Ryder flock, Annan Water, Moffat. Carrying triplets to Airyolland Cobalt, this Kingledores Adonis ET daughter is out of a Bonstone ewe.

Another ewe lamb to sell for 1,400gns was the March-born Tercrosset Emarald from James Whiteford, Brampton, Cumbria. Selling to RA Hughes of the Bryn Gof flock, Penmynydd, Llanfairpwll, her pedigree features Ardstewart Coyote ET on to Tercrosset Brandy, and she sold scanned with three to Glantre Digger.

Champion           The champion from the pre-sale show, John Cowan’s Brickrow Doner Kebab form the flock near Auchincruive, Ayr, sold for 1,000gns to Donald MacVicar, Lephinchapel, Cairndow, Argyll. Sired by Jewitt Bonzo ET and out of Brickrow Bank ET, she was scanned with a single to Matt’s Egonomic ET.