It was a good day at Carlisle for the Buckle family when they secured the Supreme Champion title before selling their winning shearling ewe for the top price of 5,000gns at the Society’s show and sale of in-lamb females and ewe lambs.

Leading the way for the Buckles, from near Barras, Kirkby Stephen, was Buckles Chloe, a home-bred Ardstewart Armani daughter bred out of the Beachy Muscle Master-sired Drumrash Naomi. Scanned with a pair to the 3,800gns Heatheryhall Campbell – the Supreme Champion and top price at Lanark earlier in the year – she sold to JM Hall, Airton, Skipton. 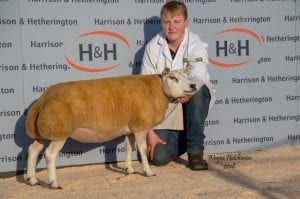 The Buckles also received 2,500gns from AJ Wood, Whittingham, Preston, for another by the 8,000gns Ardstewart Armani in the shape of Buckles C’est Bon, which stood fourth in the shearling gimmer class. Selling with a single to Heatheryhall Campbell, she is out of Buckles Tres Beau ET. 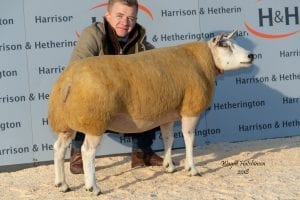 Achieving the second top price of 3,800gns was the star attraction from the dispersal of Robert Rennie’s Robex flock from Yetholm, Kelso. That was Robex Booty, a 2016-born daughter of Skiddaw View Trapper bred from Glenkeen Tabby, herself by Topflite Real Deal ET. She was scanned with a pair to Cromwell Carl and sold in a two-way split to T & A Taylor, Thankerton, Lanark, and G Harrison, Carnwath, Lanark. 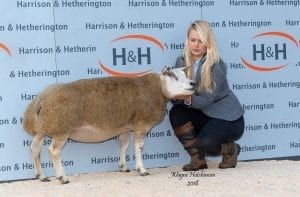 At 2,400gns from Robex was the 2015-born Ardstewart Arrogento ET, which sold scanned with one to Cromwell Carl to GC Beacom, Ballagh Road, Fivemiletown, County Fermanagh. Her breeding features Rathbone Tony ET on to Ardstewart Talk of the Tavern ET.

Making 2,000gns to J Little, Ireby, Wigton, Cumbria, was Robex Bonita, the twin sister to the 3800gns Robex Booty which this time was due with triplets to Cromwell Carl.

The second prize gimmer, Broughton Cherry Tutti ET from A & M Dunlop, from near Biggar, made 3,000gns having returned from the ring unsold at 2,800gns. This reserve champion from Biggar Show is out of the noted Broughton Tutti Frutti ET, a Woodies Ringleader ET daughter, and sired by Woodwick Alpha. Selling to J Little, Ireby, Wigton, Carlisle, she scanned carrying a single to Ryder Cider.

Stuart Wood’s pen from Skene, Aberdeenshire, peaked at 2,800gns for Woodies Cowgirl ET, a Glenkeen Sanders daughter. Bred from an imported V/H Vrijbos ewe and scanned with a pair to Bailley Brook Chief ET, she sold over the phone to J Ferguson, Comber, Newtownards. 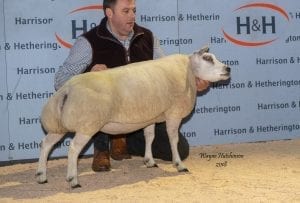 The very next lot, Godor Cerys ET, which was due with a pair to Aviemore Casinova ET, sold to back to her breeder, C Howell, Nantuaredig, Carmarthen, for 2000gns. Her breeding features Musclor de Noblehaye on to an imported dam.

The Reserve Champion, a ewe lamb named Tywi Dam Girl Your Hot ET from Ioan Jones, Maesybont, Llanelli, Carmarthenshire, realised 2,800gns. This third prize lamb from the Royal Welsh Show is by Woodies Bojangles and out of Woodies Barbie ET. She heads north to Midmar, Inverurie, with Miller Farms. 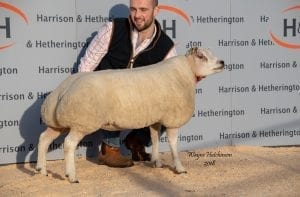 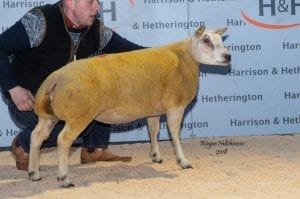 Jonathan Watson welcomed a top of 2,400gns for the dearest from his Tweeddale flock from Bowsden, Berwick upon Tweed. Tweeddale Camilla, which is by Y Bedol A-Team ET and out of Rathbone Wisteria, sold to Matthew Burleigh scanned with four to Kingledores Drake ET.