A shearling gimmer from Andrew and Claire Wood’s Withy Trees Flock near Whittingham, Preston, topped the Beltex offering in Harrison and Hetherington’s Spring Selection sale which was held on an online platform in what is considered to be a first for the sheep industry.

Despite some trepidation prior to the sale of how purchasers would respond, breeders were full of praise for the proactive approach by Harrison and Hetherington during the restrictions imposed by Covid-19 and were pleased with how the sale went.

Leading the Beltex entry at £4300 was Withy Trees Eden ET, an embryo-bred daughter of Withy Trees Copper Mountain which the Woods sold for 5000gns to the Blackadder Flock at an in-lamb sale in 2018 and is in turn sired by the 25,000gns Broxty Boxer. Eden’s sire is the 10,000gns Matt’s Ducati bought at the 2018 Premier Sale at Carlisle, and she heads Skipton, North Yorkshire, with Messrs Hall. 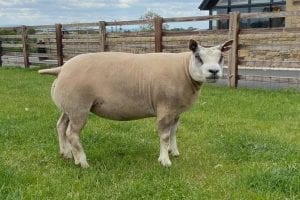 Husband and wife team, Andrew and Claire Wood, welcomed a further £2400 from Stuart Wood, Westhill, Aberdeenshire, for their next lot, Withy Trees Elba ET, another Matt’s Ducati daughter but this time out of the Ballydowns Magnus-sired Woodies Roselyn.

The Aviemore flock belonging to Bruce and Colin Mair, Cuminestown, Turriff, saw Aviemore Fabienne 2 ET sell for the second highest price of £3000 to Gordon Harrison for his Gordy’s Flock near Carnwath, Lanark. This March-born embryo is by the Bailey Brook CR7 ram shared between three flocks while her dam is Aviemore Alice 2, a daughter of the 6500gns Corstane Whistler that won her class at Turriff Show last year. 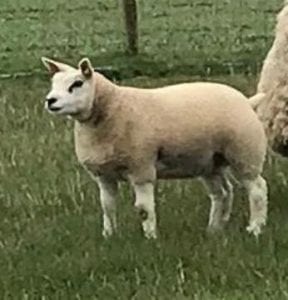 Sticking with the embryo lambs and Jock McMillan’s Clary Finance ET, a February-born son of the 7,000gns Hackney Braveheart, sold across the water to Kenny Preston, Glenpark Flock, Omagh, County Tyrone, for £2500. His dam from the Clary Flock near Newton Stewart is Clary Beautiful, a Clyde Wonderboy daughter.

Entries from Stuart Wood’s Woodies Flock proved popular not just within the Beltex breed as he and his partner, Stasa Moyse, sold 22 lots between them to average £1471. Dearest here was a pair of embryo ewe lambs, Woodies Florence ET and Woodies Flamingo ET, which were born at the end of January. Their pedigrees feature the 10,000gns Ryder DIY bought between five flocks at last year’s Carlisle Premier sale on to the 7500gns Buckles Babybel, a Plumtree Wonderful daughter which has bred sons to 12,000gns.

Florence and Flamingo were snapped up by Georgia Delves for her Upper View Flock, Montgomery, Powys, who paid a further £1800 for a full brother from the same flush, Woodies Flaunt It ET.

Woodies Flo-Rida ET, a March-born embryo, was also in the money, selling for £1900 to Darren and Jordanna Gallagher of the Richmond Beauties Flock near Dungannon, County Tyrone. Out of a home-bred Woodies Adonis daughter, Flo-Rida is sired by Airyolland Choco.

The Gallaghers also paid £2200 for one of two ewe lambs at that price from Matthew Burleigh’s Matt’s Flock, Enniskillen, County Fermanagh. Matt’s Flash ET, a February-born embryo, is by the 11,000gns Kingledores Edmund ram bought at the Premier sale last year and out of the Hackney Corker-sired Matt’s Do Nut.

Matt’s Funky ET was the other £2200 lamb and this time heads south of the Border to Loughduff, Cavan, Eire, with Eddie Lynch who is setting up a new flock. Sired by Ardstewart Angus, she is out of Matt’s Charlotte’s Web, a Kingledores Apollo daughter.