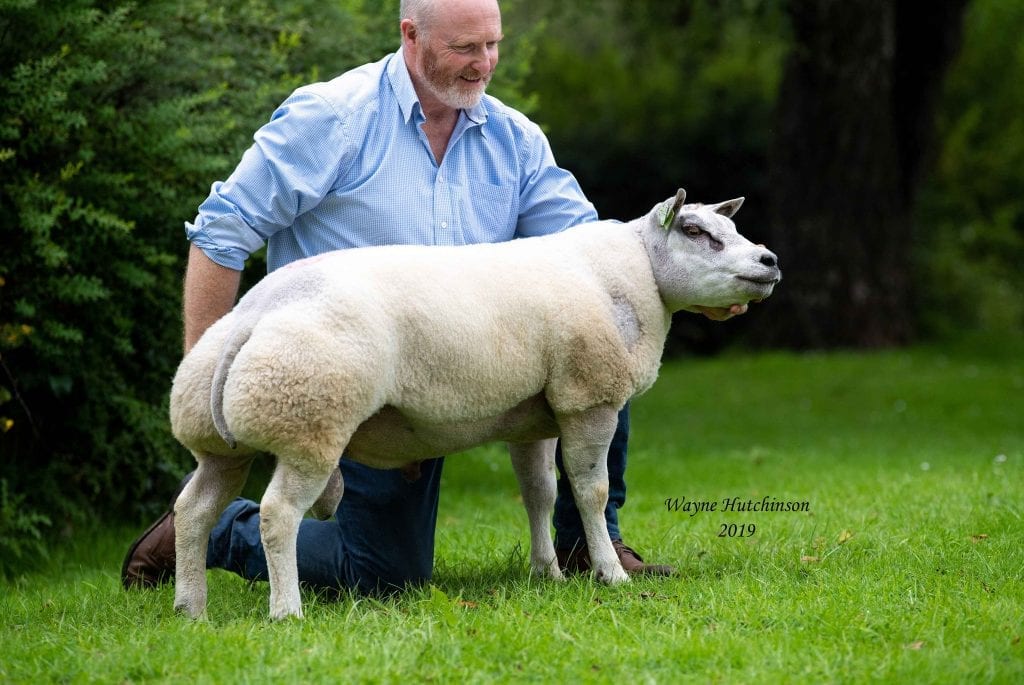 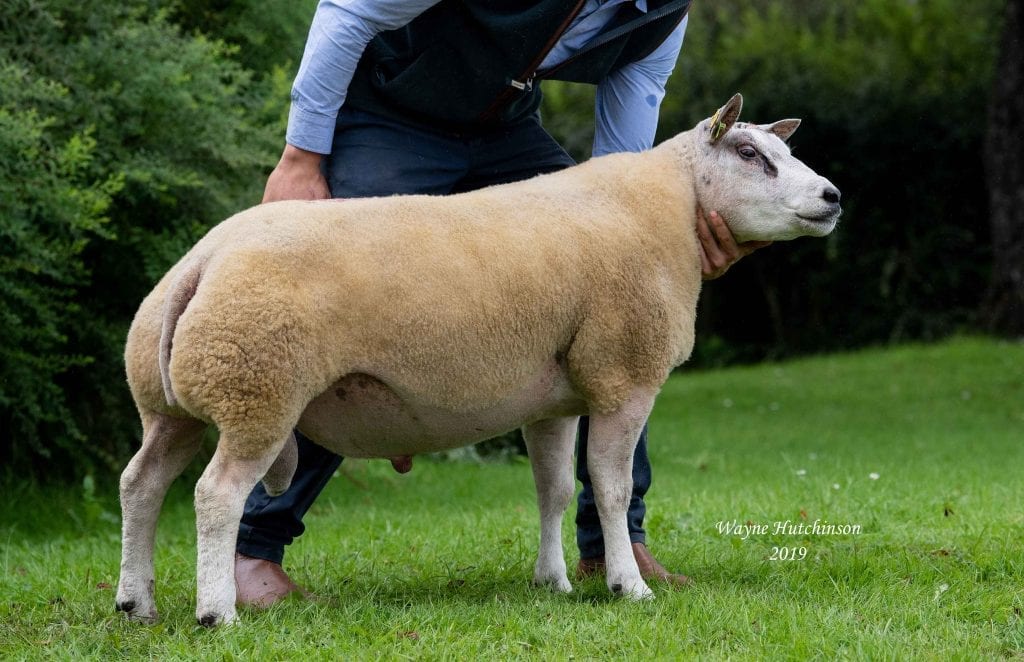 BELTEX breeders flocked to Carlisle for the 27th Premier Show and Sale of males and females at Harrison and Hetherington’s Borderway Centre from Wednesday to Friday August 14-16, where, despite no records being set as seen in the last three years, averages held up well on the year.

Undoubtably the biggest celebrations came from the Buckles family – Kevin and sons, Jack and Tom – from Kirkby Stephen, who first led the ram lamb trade at 12,000gns on Thursday before topping the shearling rams at 30,000gns on Friday.

Their leader was Buckles Dark Dawn ET, a son of the 8,000gns Ardstewart Armani which had previously bred sons to 6,500gns and daughters to 5,000gns. Bred from the Ardstewart Super Mario-sired Buckles Annie Power, this first prize winner from Cumberland Show was knocked down to Alfie Taylor for use in his 40-ewe Heatheryhall flock near Pettinain, Lanark.

“It’s not often you see a ram with the presence, size and correctness as you see in him,” said Mr Taylor of his purchase. 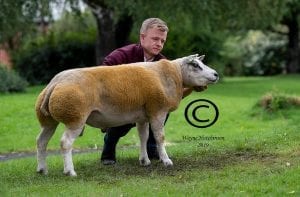 The Buckles welcomed a further 11,000gns for the next lot in, Buckles Dark Intentions ET, which claimed the breed championship at the Great Yorkshire Show earlier in the year. Full of old breeding, he is by Glantre Norris while his dam is Woodies Natasha, an Ardstewart Lord Almighty daughter. Dark Intentions heads to New Yatt, Witney, Oxon, to join the Mutch family’s Heath Holm flock.

The second highest prize of 15,000gns came late on in the sale when the much talked about Tiree Donegal ET from Alasdair MacLean sold to three flocks – Robert and James Hamilton’s Shawtonhill and Mid Shawtonhill flocks near Strathaven as well as Alistair Meikle’s Whindyke flock near Jackton, Glasgow. His breeding, Callacrag Wise Crack on to the Woodies Ringleader-sired Tiree Spice, has already proved successful for Alasdair, producing the 8,000gns Tiree Benchmark sold in 2016 as well as the reserve champion at the 2018 Royal Highland Show, Tiree Clover.

Another Wise Crack son from Alasdair, Tiree Dynamic ET, sold to J Buchan, Lintrathen, Kirriemuir, for 5,000gns. He is out of a Tiree Spice daughter, Tiree Annette, and is a full brother to the 7,000gns Tiree Captain sold here last year.

Heading to Lochend, Denny, to join Andrew Morton’s Mortons flock for 10,000gns was Gyffin Dexter, a Smart Ass Buster son from Welsh breeder, Gethin Mathias, Llanwrda, Carmarthenshire, but bought at Ruthin as a lamb from Edward Lewis. Marking a successful Carlisle debut for Gethin, who typically sells at Welshpool, Dexter is out of Artnagullion Buttercup, an Ardstewart Armani daughter.

Consigned from the North-east of Scotland and marking an unforgettable tup selling debut for Gordon and Lynsey Carroll was their shearling ram, Edendiack Darius ET, which was knocked down for 10,000gns to Jeff and Sue Wilkinson who will take him to work in their Langlands flock near Richmond, North Yorkshire. The husband and wife team from Gartly, Huntly, have only recently started breeding pedigree Beltex and their leader from their 30-ewe flock is out of one of the foundation females, Airyolland Betty Boo, which was bought for 7,000gns at the Beltex Beauties sale in 2017, while his sire is the noted Padkin Sugar Daddy.

Decoy also sold two ways, this time to Orkney with Raymond Flaws of the Woodwick flock and the Copland family for their Orkney flock

Also selling well from the North-east of Scotland was Swffryd Dakota ET, an entry from Stuart Wood’s son, Murray, from Skene, Westhill. Bred by and bought from Aled Groucott as a lamb, Dakota is sired by the 60,000gns Topflite Al Pacino and out of Hackney Treacle, making him a full brother to Aled’s successful show gimmer this year. He sold for 8,000gns to Belgian breeders, Messrs Sprangers, Messian and Jonckheere.

“We liked everything about him – his size, power, colour, shape and character,” said Marc Messian, who has been attending the Carlisle Premier for the past 10 years but making his first purchase to take back to Belgium.

Also heading to Heatheryhall, this time for 7,000gns, was Glan-Y-Mor Demon ET from Matthew Jones, Talsarnae, Gwynedd. Sired by Rathbone Tony, Demon is out of an imported ewe, Noisette Du Bouchi.

Two further rams sold for 7,000gns apiece, including Jock McMillan’s Clary Dumfries ET, from near Newton Stewart. A full brother to this year’s Royal Highland Show champion, Dumfries is sired by Hackney Braveheart and out of Clary Bella. He sold in a three-way split to Welsh breeders Dafydd Owen of the Smart Ass flock and Edward Lewis of the Gyffin flock, both Conwy, as well as Sion Jones of the Fronarth flock, Llanon.

Selling to Andrew Wood, of the Withy Trees flock near Whittingham, Preston, for 7,000gns was the dearest from Neale and Janet McQuistin in the shape of Airyolland Deuchars ET, which had been used as a lamb. His pedigree features Woodies Big Yin on to Airyolland Wummin’.

Matthew Burleigh, from Enniskillen, County Fermanagh, saw his first in sell for 6,000gns to Paul Slater, Whitley Hey, Adlington, Macclesfield. Matt’s Dexy Midnight ET is by Murrays Code and out of Matt’s Adelle.

Starting off a great sale for the Buckles family was their Buckles Einstein ET, a late February-born ram lamb bought as an embryo from Stuart Wood. Einstein is out of Buckles Babybel, a Plumtree Wonderful daughter sold to Mr Wood for 7,500gns at the Beltex Beauties sale in 2017, while his sire is the 7,000gns Artnagullion Charlie Chaplin. He caught the eye of Gary Beacom and heads across the water to Fivemiletown, County Fermanagh, to work in the Lakeview flock. 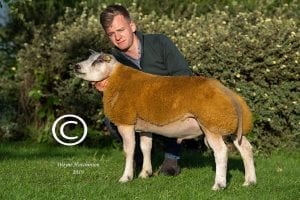 Next best at 11,000gns was John and Richard Wood’s substitute entry, Kingledores Edmund ET, which also sold across to Northern Ireland, this time to Mathew Burleigh, of the Matt’s flock, and Andrew and Jamie McCutcheon for their Bodoney flock. He is by the 3,000gns Arkle DJ while his dam is the College Awesome-sired Kingledores Bessy.

Selling for 5,200gns in a two-way split to George Cropper, Hudhey flock, Rossendale, Lancashire, and Adam Neachall, Cromwell flock, Walsall, West Midlands, was Hillview Enforcer from Neil and Jane Noble, Skelton in Cleveland, Saltburn by the Sea. This reserve male champion from the Great Yorkshire Show is by Matt’s Superman and out of Hillview Apricot, an Eskdale Tweed daughter.

Dearest of the aged rams at 5,200gns was Langlands Bruiser, consigned by Ross and Kirsty Williams, from near Huntly. Originally sold to five Scottish flocks for 13,000gns, this two-shear bred by the Wilkinsons secured the male championship at last year’s Royal Highland Show and has bred well with many sons and daughters on offer at Carlisle. Sired by Smart Ass Alfie and out of Beautry Trudy, he sold in a three-way split to Neil Caul, of the Balkello flock; S and A Moore for their Balhall flock; and Gregor Yarr of the Witton flock, all based in Angus Tayside.

Graham and Fiona’s Burke’s successful show shearling gimmer, Pentland Dixie ET, an Airyolland Wurzel daughter from the flock at Edzell, Brechin, topped the female section at 5,000gns when she sold to Vicky Bowring for her Windmill flock near Nottingham. This champion from the Scottish National Show held at Border Union has won a number of breed and reserve inter-breed titles this year, and is bred from the Kingledores Rascal-sired Pentland What a Star. 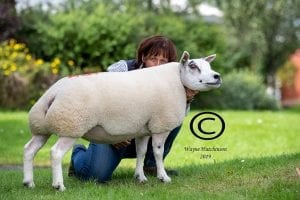 Ms Bowring paid a further 4,000gns for Jock McMillan’s Clary Drama ET, a full sister to the Highland Show winner being by Hackney Braveheart and out of Clary Bella.

Graeme Sinclair saw his two shearling ewes – full sisters by Kingledores Battleaxe and out of Broughton Bryony – both sell for 3,000gns, including his female champion and reserve supreme from the pre-sale show, Sinclair’s Diva ET, which sold to MJ Ludgate for the JML flock near Thame, Oxon.

Sinclair’s Daisy ET matched that when sold to Alan Miller for his Lurg flock near Midmar, Inverurie.

A Murrays Code daughter from Gary Beacom sold to Nathan Dakin of the Panbeck flock, Skipton, for 2,800gns. Lakeview Dream Catcher ET is out of Rathbone Baby.