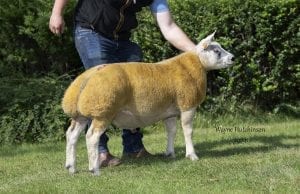 Setting that new record was Mathew Burleigh’s Matt’s Flash Harry ET which sold to Paul and Christine Tippetts, Hackney and Wilodge, with Richard and Jamie Jerman, Brilley, taking a third-share. This February-born embryo is by the 11,000gns Kingledores Edmund bought in partnership with Andrew and Jamie McCutcheon, Bodoney, at last year’s Premier Sale, while his mother is the Hackney Corker-sired Matt’s Do Nut, which is in turn out of one of the flock’s best ewes, Matt’s Adelle.

“I was looking for something with a bright outlook and plenty of lift as well as great character and muscle, and he has it all,” said Paul of his purchase. “He also has a lot of Hackney breeding in his background being a Corker grand-son and going back to Hackney Warrior and our brood ewe Hackney Wow.”

Late in the day, the Buckles boys – Kevin and sons, Jack and Tom – sold their Buckles French Toast ET for 11,000gns to the Ingram Family for producing cross tups at Logie Durno, Aberdeenshire. Sired by the 10,000gns Gyffin Dexter shared with Andrew Morton, Mortons, the January-born French Toast is out of the renowned College Adele, a Kingledores Trojan daughter and former Great Yorkshire Show champion.

Two hit 9000gns apiece with the first being Jock McMillan’s Clary Fly ET which sold in a two-way split to John Cousar, Howcommon, and the Hamilton family, Shawtonhill and Mid Shawtonhill. Bred from the 2019 Royal Highland Show champion, the Hackney Braveheart-sired Clary Delight, his sire is the 2800gns Smart Ass Dark Horse.

Brian Hall picked up 7000gns for his Ainstable Factotum ET from Gary Beacom, Lakeview. By the 3200gns Kingledores Engleburt bought at Skipton last year, his dam is the Woodies Wicked daughter, Ainstable Dice. 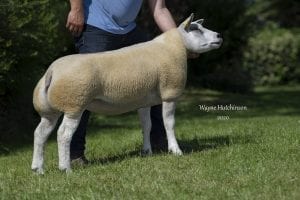 Shearling ewes also met a roaring trade and the first to sell for 7000gns was Gary Beacom’s Lakeview gimmer which sold to Neil Laing, Perryflatts. By the 13,000gns Langlands Bruiser that sold at Carlisle as an aged ram last year for 5200gns, this powerful lass is out of the Loandhu Bonzo-sired Aviemore Cutie ET bought when she stood champion at Lanark. 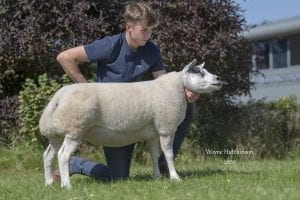 Matching that was Stuart Wood’s Woodies Earwig which sold to Rosie Boden, Mellor Vale. By the retained Woodies Cookie Monster, a Loandhu Bonzo son, Earwig is a naturally-born daughter of the Ardstewart Armani-sired Artnagullion Butterfly.

Two followed on at 5000gns with the first of these being Alan Miller’s Lurg Ella ET which sold in a partnership to Alfie Taylor, Heatheryhall, and Gordon Harrison, Gordy’s. She is the result of a flush of the good breeding ram, the 5000gns Bailey Brook CR7, on to Woodies Classy Girl ET, a Carrigans Bob Lee Swagger daughter.

Also making 5000gns was John Cowan’s Brickrow Emma which sold to Wannops Farms, Wannop’s. Sired by the privately purchased Beckbred Crusader which sold for 1900gns as an aged ram on Thursday, she is out of the Loandhu Bullet-bred Brickrow Coca Cola.

At 4800gns was Alasdair MacLean’s Tiree Early Bird ET which sold to Michael and Heulwen Owens, Glantre. By Skiddaw View Del Boy, Early Bird is out of Alasdair’s proven brood ewe, Tiree Spice, which has bred sons to 15,00gns.