Despite a fair amount of caution swirling around sale season this year, the Premier Sale at Carlisle got off to a good start on Thursday with a strong demand for shearling rams peaking at 16,000gns with a further two at 14,000gns apiece. With 13 rams selling at 5000gns and above, the Thursday average levelled at £1396 for 303 shearling rams sold (against 687 at £1152 last year). 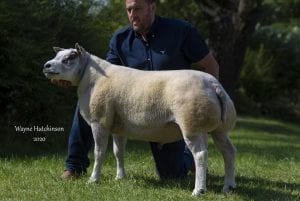 Stuart Wood celebrated a good day when he saw his pen leader, Woodies Explosive, sold to Alan Miller, Lurg, for that 16,000gns. This naturally-bred shearling is sired by the 5000gns Bailey Brook CR7 that has bred well in the syndicate in the North-East of Scotland while his dam is the Loandhu Bonzo-sired Woodies Crunchie Nut.

The very next lot, Woodies Emperor ET, then sold for 14,000gns in a three-way split to Ali Jackson, Tiptop; Jonathan Watson, Tweeddale; and Jamie Gregory, Speir. His dam is Stuart’s inter-breed champion at the 2018 Royal Highland Show, Woodies City Girl, by Carrigans Bob Lee Swagger, and his sire is Airyolland Choco.

Also making 14,000gns was the first in from Bryan Ryder in the shape of Ryder Enrique ET which was knocked down in a two-way split to Raymond Flaws, Woodwick and Colin Mair & Partners, Aviemore. His pedigree features Aviemore Casual on to a ewe full of home breeding, the Ryder Wee Willie Winkie-sired Ryder Anneka.

Another hitting the four-figure price range was Neale and Janet McQuistin’s Airyolland Echo Beach which heads down to Wales with Michael and Heulwen Owens, Glantre. Another packed full of home breeding, Echo Beach is by Airyolland Del Amitri and out of Airyolland Baby Face, an Ardstewart Super Mario daughter.

Just behind on 9000gns was James McGarva’s Horseclose Eskimo ET which sold to Nathan and Becki Dakin, Panbeck, with a half share later bought back. His sire is Horseclose Lorenzo while his dam is the Corstane Waitangi daughter, Horseclose Butterscotch.

Aged rams peaked at 3000gns for Pat and Rory Machray’s Kingledores Destroyer which sold to Georgia Delves, Upper View. This two-shear is by Clary Chancer and out of the Glenkeen Sanders-sired Kingledores Brandy.

6500gns – K Preston’s Glenpark Ever Ready, by Wern Domino, to A & M Dunlop, Corstane and Broughton.

A Friday round-up will follow tomorrow with full report at conclusion of sale.