THERE may have been a degree of uncertainty in the air heading in to the Beltex Sheep Society’s Premier Sale of rams and females at Harrison and Hetherington’s Borderway Mart last week (Thursday to Saturday, 13 to 15 August), but that was well and truly blown out the water when averages improved significantly across the boards and a new auction record price for a ram lamb of 45,000gns was set.

“I’m delighted with how the sale worked out despite the uncertainty going into it and averages being up across the board can only be a plus,” commented the Beltex Sheep Society’s Chairman, Jim Kennedy. “The Society would like to extend a big thank you to Harrison and Hetherington as well as the buyers and sellers for adhering to the sale guidelines and making it a workable sale.” 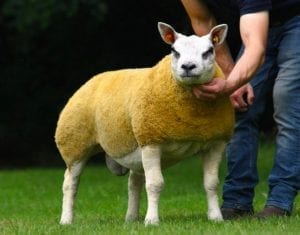 Setting that new record of 45,000gns when sold to Paul and Christine Tippetts, of the Hackney and Wilodge flocks, Shropshire, with Richard and Jamie Jerman, Brilley, taking a one-third share, was Matthew Burleigh’s Matt’s Flash Harry ET from across the water near Enniskillen, County Fermanagh. This February-born embryo is by the 11,000gns Kingledores Edmund bought last year in partnership with Andrew and Jamie McCutcheon’s Bodoney flock, while his dam is Matt’s Do Nut, a Hackney Corker daughter bred from one of the best ewes in the flock, Matt’s Adelle.

“I was looking for something with a bright outlook and plenty of lift as well as great character, carcase and muscle, and he has it all,” said Paul of his purchase. “He also has a lot of Hackney breeding in his background being a Corker grand-son and going back to Hackney Warrior so it’s good to get some of our proven breeding back.”

It was a fantastic few days trading for Aberdeenshire’s Stuart Wood when he topped the shearling trade on both of the first two days with entries from his Woodies and Murrays flocks as well as sold the joint top priced gimmer on Saturday, selling 29 sheep between the three days to average £3407. 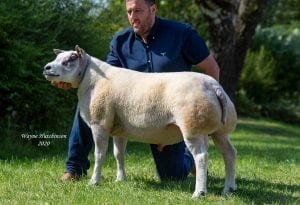 Leading the way at 16,000gns was Woodies Explosive, a naturally-bred son of the 5000gns Bailey Brook CR7 that has bred well in the North-east syndicate. Heading back to Aberdeenshire when knocked down to Alan Miller for his Lurg flock, Explosive is out of Woodies Crunchie Nut, a daughter of the 7000gns Loandhu Bonzo. 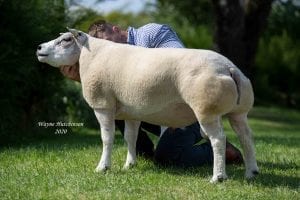 The very next lot, Woodies Emperor ET, then sold for 14,000gns in a three-way split to Ali Jackson, Tiptop; Jonathan Watson, Tweeddale; and Jamie Gregory, Speir. His dam is Stuart’s inter-breed champion at the 2018 Royal Highland Show that sold privately for £20,000, Woodies City Girl, by Carrigans Bob Lee Swagger, and his sire is Airyolland Choco. 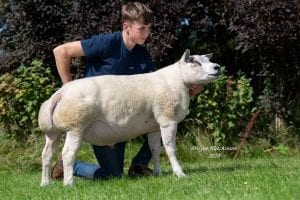 On Friday, one from Stuart’s young son, Murray’s pen also hit the 14,000gns mark when sold to Matthew Burleigh, Matt’s flock, and Victoria Bowring, Windmill flock. Murrays Expert is among the first crop by the 4200gns Kingledores Demonstrator bought as a lamb at Skipton while his dam is an imported ewe bought at a Belgian flock dispersal. 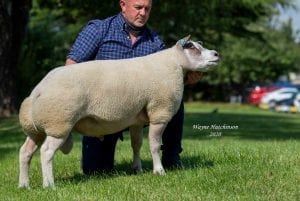 Also making 14,000gns was the first in from Brian Ryder’s pen on Thursday in the shape of Ryder Enrique ET which was knocked down in a two-way split to Raymond Flaws, Woodwick, Orkney, and Colin Mair & Partners, Aviemore Flock, Turriff. He is among the first crop of lambs by the 1800gns Airyolland Casual while his sire is the Ryder Wee Willie Winkie-sired Ryder Anneka which also bred the shearling ram sold to Kingledores last year, Ryder Dick Turpin. 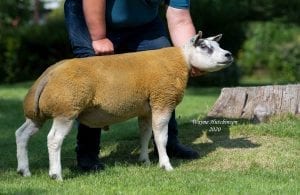 Brian Ryder and Stuart Wood then bid a combined 12,000gns for Aled Groucott’s Swffryd Eye Catcher ET from Wales. Full of breeding, Eye Catcher is by the 65,000gns breed record holder, Airyolland Castro, while the dam is Aled’s prolific brood ewe, the Ryder Rooney-sired Hackney Treacle which is a former winner of the Royal Welsh Show. 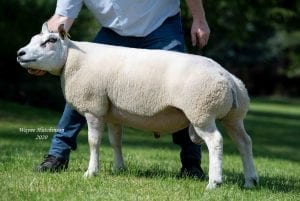 Another hitting the five-figure price range was Neale and Janet McQuistin’s Airyolland Echo Beach which heads down to Wales with Michael and Heulwen Owens, Glantre, for 10,000gns. Packed full of home breeding, Echo Beach is by Airyolland Del Amitri which was used as a lamb before selling for pedigree work, while his dam is Airyolland Baby Face, an Ardstewart Super Mario daughter. 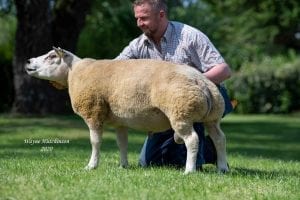 Close behind and nearly tripling James McGarva’s previous best sale price when knocked down for 9000gns was Horseclose Eskimo ET which features some old home breeding being by Horseclose Lorenzo, a ram not used for 12 years or so. Bred out of Horseclose Buttercup, a Corstane Waitangi ewe, Eskimo sold to Nathan and Becki Dakin, Panbeck, with a half share later bought back. 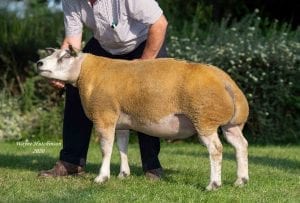 Two sold for 8000gns apiece, with the first of these being Brian Hall’s Ainstable Earnest ET which sold to Jonathan Watson, Tweeddale, and Henry Jewitt, Jewitt and Sunnybank. Sired by the 15,000gns Black Jack Casanova shared with the Airyolland flock, Earnest is out of the home-bred Ainstable Wendyhouse, which is in turn by an imported ram. 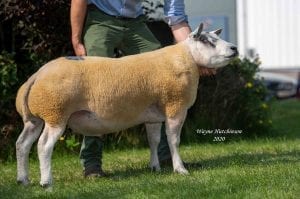 Faughhill Elephant in the Room – 8000gns 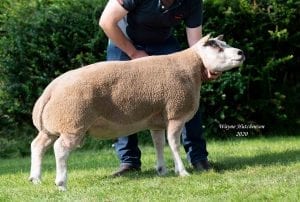 Not far behind on 7800gns was the dearest of a good run of sheep from John McLean, Culsh, in the shape of Culsh Ebenezer. Among the first crop by the 1600gns Lyonpark Drew bought at the Premier Sale as a lamb, Ebenezer goes back to the best breeding line being out of Culsh Whitney, a Culsh Millymollymandy daughter.  He caught the eye of Wil Evans and heads to Wales to work in the Myna flock. 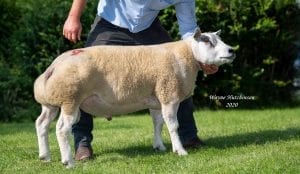 Richard Wood received 7000gns from Gordon and Lynsey Carroll, Edendiack flock, for his Kingledores Einstein. Out of the same ewe that bred the 4200ns Kingledores Destroyer, Kingeldores Brandy, Einstein’s sire is the renowned Clary Prankster. 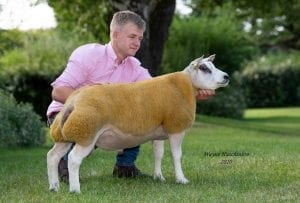 On to the ram lambs and late on Saturday trade for the top pick was still strong after the buzz of the new record priced lamb as the Buckle boys – Kevin and sons, Jack and Tom – sold their Buckles Fury ET (please note change of name from French Toast to Fury as requested by purchasers) for 11,000gns to the Ingram Family for producing cross tups at Logie Durno, Aberdeenshire. Sired by the 10,000gns Gyffin Dexter shared with Andrew Morton, Mortons, the January-born Fury is out of the renowned College Adele, a Kingledores Trojan daughter and past Great Yorkshire Show champion. 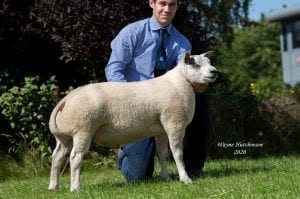 Two hit 9000gns apiece with the first being Jock McMillan’s Clary Fly ET which sold in a two-way split to John Cousar, Howcommon, and the Hamilton family, Shawtonhill and Mid Shawtonhill. Bred from the 2019 Royal Highland Show champion, the Hackney Braveheart-sired Clary Delight, his sire is the 2800gns Smart Ass Dark Horse. 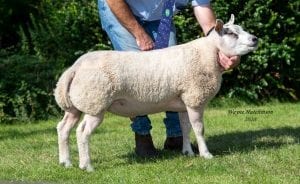 Chris Wright and son, Joseph, surpassed their previous best of 800gns achieved earlier in the sale when their Brothertoft Fynley ET sold in a two-way split to Wannops Farms, Wannop’s, and Rosie Boden, Mellor Vale, for 9000gns. The pedigree here features the 10,000gns Woodwick Brave Heart on to the Matt’s Superman daughter, Hillview Amazon. 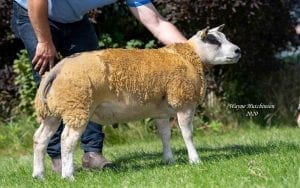 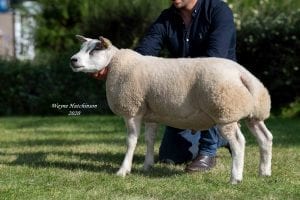 Hitting the 6500gns mark was Bruce and Colin Mair’s Aviemore Festival ET, a March-born lamb by the 6500gns Corstane Whistler. Also selling in a two-way split to Rosie Boden, Mellor Vale, and Wannops Farms, Wannop’s, Festival is out of the Airyolland Avicii-sired Aviemore Casey. 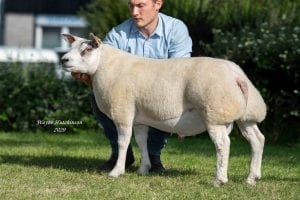 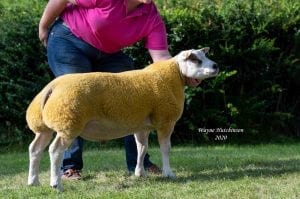 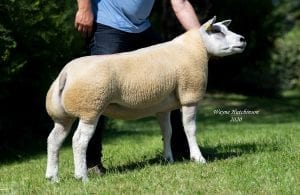 Shearling ewes also met a roaring trade and the first to sell for 7000gns was Gary Beacom’s Lakeview Earn Your Keep which sold to Neil Laing for his children, Euan, Fiona and Kirsten’s Perryflatts flock. Sired by the 13,000gns Langlands Bruiser that sold at Carlisle again as an aged ram last year for 5200gns, this powerful lass is out of the Loandhu Bonzo-sired Aviemore Cutie ET bought when she stood champion at Lanark. 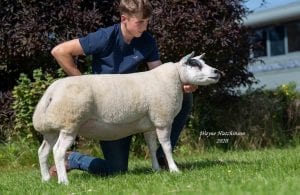 Matching that 7000gns was Stuart Wood’s Woodies Earwig which sold to Rosie Boden, Mellor Vale. By the retained Woodies Cookie Monster, a Loandhu Bonzo son, Earwig is a naturally-born daughter of the Ardstewart Armani-sired Artnagullion Butterfly. 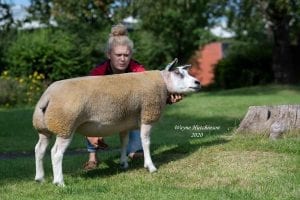 Two followed on at 5000gns with the first to hit that mark being Alan Miller’s Lurg Ella ET which sold in a partnership to Alfie Taylor, Heatheryhall, and Gordon Harrison, Gordy’s. She is the result of a flush of the good breeding ram, the 5000gns Bailey Brook CR7, on to Woodies Classy Girl ET, a Carrigans Bob Lee Swagger daughter. 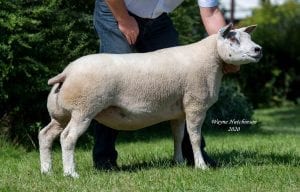 Also making 5000gns was John Cowan’s Brickrow Emma which sold to Wannops Farms, Wannop’s. Sired by the privately purchased Beckbred Crusader which sold for 1900gns as an aged ram on Thursday, she is out of the Loandhu Bullet-bred Brickrow Coca Cola. 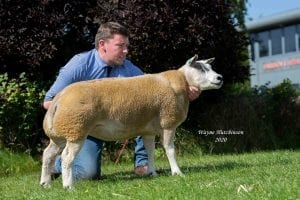 At 4800gns was Alasdair MacLean’s Tiree Early Bird ET which sold to Michael and Heulwen Owens, Glantre. By Skiddaw View Del Boy, Early Bird is out of Alasdair’s proven brood ewe, Tiree Spice, a Woodies Ringleader daughter which has bred sons to 15,000gns.