In the Aged Ewe class, Bodoney Everest ET from Andrew and Jamie McCutcheon’s Bodoney Flock, Trillick was the class winner. 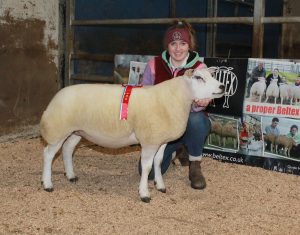 The Supreme Champion, Artnagullion Fonta, took top price on the day selling to Kenny Preston from Omagh for 1300gns.

Artnagullion Fonta was described by judge, Gary Scott from Omagh, as “a real big, correct sheep with great skin and end.”

Sired by Greenall Dennis The Menace, the dam is Artnagullion Angel.

The McAllisters also recorded the second highest price with their runner-up in the shearling ewe class, Artnagullion Fable, selling to Russell Tinney from Letterkenny, for 1100gns.

The Reserve Champion, Matthew Burleigh’s ewe lamb, Matt’s Gossip ET, was described by Gary as “a real flashy ewe lamb that handled very well and also had a great skin”.

Sired by Murrays Expert, the dam is Matt’s Cracker.

“In general terms we had a good show of sheep with some exceptional females in the classes, a credit to the owners,” added Gary.

In the follow-up sale Matthew Burleigh’s shearling ewe, Matt’s Fragile ET, was purchased by Russell Tinney from Letterkenny for 800gns.

Hugh O’Neill from Glenarm had two shearling ewes sell for 640gns each, Lagyveagh Fuschia and Lagyveagh Forget Me Not, both being purchased by Trevor Smyth from Kilrea.

Andrew and Jamie McCutcheon’s aged ewe, a Lakeview ewe, was purchased by John Hutchinson from Comber for 600gns.