It was ‘sweet’ success for Matthew Burleigh at the Irish Beltex Sheep Breeders Club Christmas Show and Sale in Dungannon Farmers Mart as Matt’s Caroline, Lot 8, a shearling ewe, was named Show Champion.

Judge Francis Lyons from Kilconnell, County Galway, described the winning shearling as ‘having good width and a strong head – an excellent all round ewe!’.

Caroline – which is by Hackney Wonderboy and out of the Pentland Showman-sired Matt’s Www. – went on to top the sale at 1,750gns when snapped up by Colm Curran, Kilbride, Trim, County Meath. 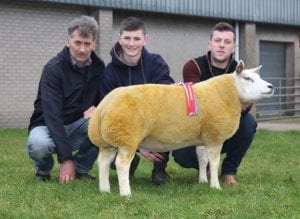 Supreme Champion and top price at 1,750gns was Matt’s Caroline

Reserve Champion was Lot 12, Ravara Bressi ET, an aged ewe from A. Murray & Son’s Ravara Flock, Ballygowan, which sold for the next best price of 820gns to D Patton, Newtownards. She is by Artnagullion Tornado and out of Ravara Lucy. 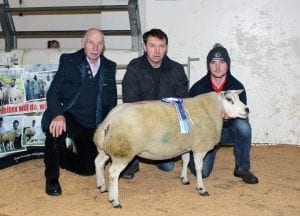 The Ewe Lamb class winner was Ballycreelly Danielle, Lot 27, belonging to K & A McCarthy, Comber, which sold to Hugh O’Neill, Glenarm, for 210gns.