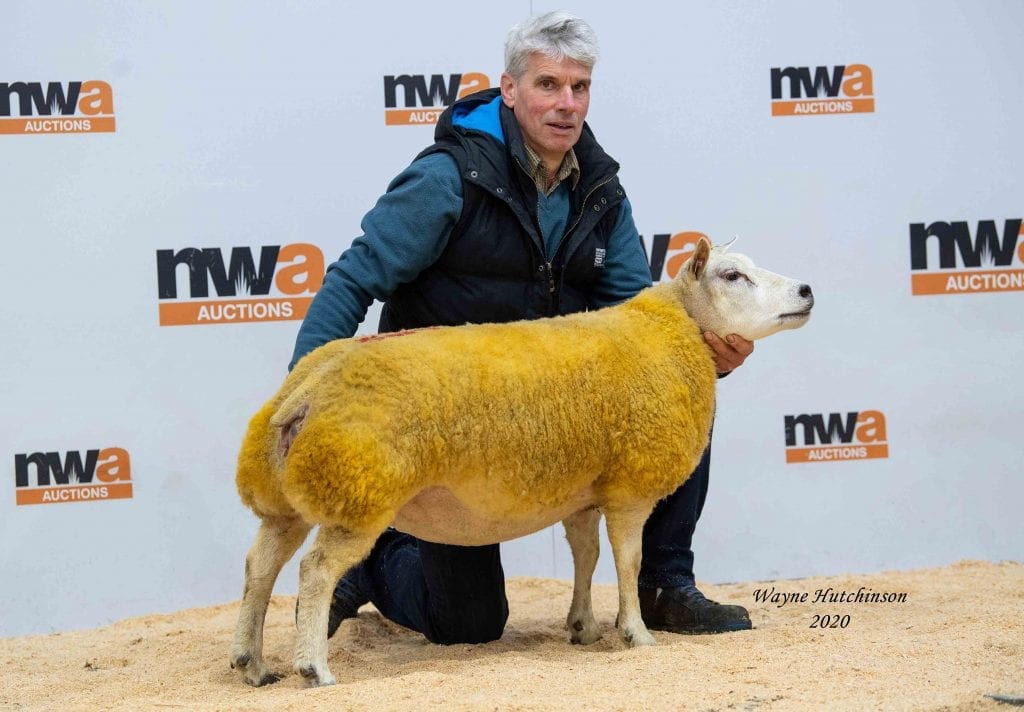 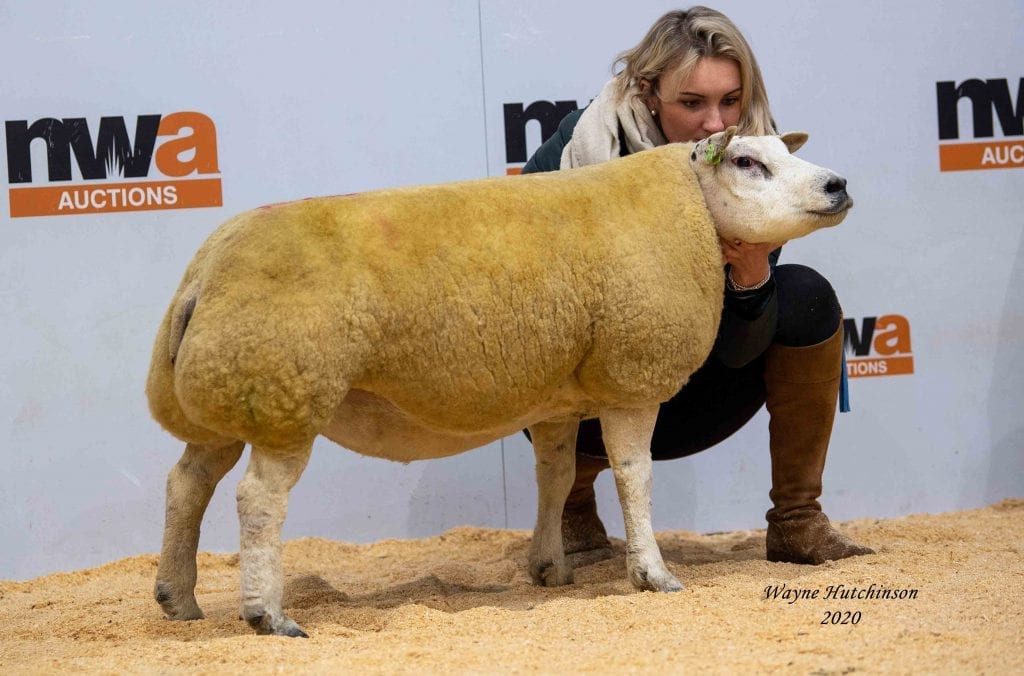 Trade was buoyant at the inaugural sale of Beltex females at North West Auctions’ Junction 36 Kendal centre on Saturday, 4th January, where a top of 1,300gns was paid with a further two at the 1,000gns mark.

Selling for that top price was the Reserve Champion from the pre-sale show, Mortons Dazzle, a shearling ewe from Andrew Morton, Lochend, Denny, Stirlingshire, which headed back north across the border to join Iain Reid’s Osprey flock near Methven, Perth. Sired by the 10,000gns Kingledores Battleaxe ET and out of Mortons Adele, a Damien V/D Drie Musschen daughter, Dazzle sold scanned with a pair to the second prize shearling ram from the Royal Highland Show, Matt’s Dare Devil ET.

Andrew also received 700gns for another Battleaxe daughter in the shape of Mortons Danni, which again sold served by Matt’s Dare Devil ET. Danni is out of Hudhey Tia Maria ET, a daughter of Cree Sparticus ET.

Two from Stuart Wood’s Woodies flock from Skene, Aberdeenshire, sold for 1,000gns apiece with the first of these being Woodies Delphinium, which sold carrying a pair to the home-bred Woodies Cookie Monster. Sired by Wern Cian and out of Ardstewart Anna Bell ET, a daughter of Rathbone Tony ET, Delphinium sold to Jones Livestock for the Redlands flock, Bonvilston, Vale of Glamorgan.

Another from Stuart, Woodies Daft Dorothy ET, this time by Woodies Adonis ET and out of an imported V/H Vrijbos ewe, sold to AS Hamplett’s Booden flock, Houghton, Staffordshire, for 700gns. She sold in-lamb to Ainstable Castaway.

Alisdair Prickett, Farleton, Carnforth, paid 650gns twice for two recipients carrying single embryos from Stuart Wood to join his Farleton House flock. These were both by Airyolland Choco and out of Woodies Coral ET.

Selling for 850gns was Rathbone Diana Dors ET from Mike Davis, Eldroth, Austwick. This Topflite Al Pacino daughter is out of Dooley Wilma, herself by Jef V/D Drie Musschen, and sold scanned with twins to Airyolland Cobalt. She joins the Limestone flock of W Storey, Hayclose, Calthwaite, Penrith.

Also realising 700gns was Rebecca Braithwaite’s Sovereign Dora ET from the flock at Lower Bentham, Lancaster. Selling to B Robinson, Grate, Ouseburn, York, served by Matt’s Ducati ET, she is by Dean Brow Carlos ET and out of Ainstable Wasabi.

Schools are officially out for summer so it’s the perfect time to get your young handlers entries in as the deadline has been extended until 12noon on Tuesday. Send a video up to one minute and make sure to tell us a bit of information on your sheep, let the sheep go then catch it and stand it up again. Send to Kayley via WhatsApp on 07375 563809 and see the website for full guidelines. ... See MoreSee Less

Here are your Champion and Reserve in the pedigree flock competition. Judge, Janet McQuistin, Airyolland, commented: “The gimmer class was particularly strong. It’s quite an achievement to draw a pen of 5 such evenly matched sheep that look so full of character and so well put together. So overall champion goes to the first placed pen of gimmers.“And with that class being so strong and there not being much between the first and second place gimmers, the reserve goes to the second place pen of gimmers.”Well done to both Jamie & Richard Jerman, Brilley Flock, and Messrs Buckle, Buckles, for winning Champion and Reserve, and thank you to everyone who took part. ... See MoreSee Less

The results are in for the last of the pedigree flock classes for trios of ram lambs and ewe lambs by the same sire, as judged by Janet McQuistin, Airyolland. The overall champion and reserve will be announced tomorrow but in the meantime don’t forget about our young handler and commercial flock classes. ... See MoreSee Less

It's day two of our pedigree flock competition and the turn of the trios of ram lambs and ewe lambs by the same sire. Results to follow later today as judged by Janet McQuistin, Airyolland Flock. ... See MoreSee Less