A reduced offering of shearling rams sold to a strong demand at the Northern Beltex Club’s sale at North West Auctions’ Kendal centre on Monday, 13 September, where entries from Brian Hall’s Ainstable flock topped the sale. 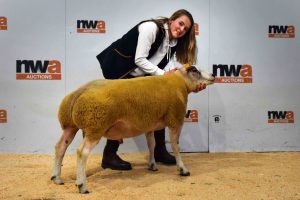 Leading the way was the Supreme Champion from the pre-sale show, Ainstable Felloe, which sold to young breeder, Robyn Allen, whose own rams met a good trade at the recent ‘Lads Night Out’ sale. Felloe is sired by the Kingledores Engleburt ram that has bred well in the flock near Carlisle, while his dam is the Withy Tree Automatic Monkey daughter, Ainstable Deluxe.

The very next lot and another by the Kingledores ram in the shape of Ainstable Fang ET sold to PW & D Swindlehurst for 1100gns. He is out of Ainstable Wendyhouse, herself by an imported Belgian ram. 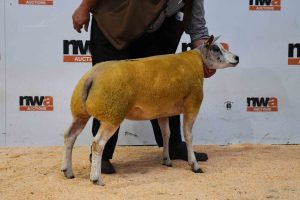 Brian’s Ainstable flock also led the female entry when the Reserve Supreme, Ainstable Farewell ET, sold to Alasdair Prickett for his Farleton House flock near Carnforth. Farewell is a full sister to the 1100gns Fang, being by Kingledores Engleburt and out of Ainstable Wendyhouse. 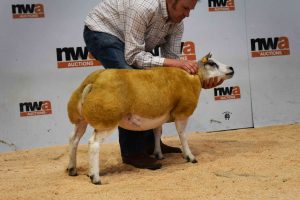 Ted received a further 650gns from RR and J Wade and Son for Benndale Faith which is full of Belgian breeding on both sides.