Shearling ewes from across the Border from Andrew Morton and daughter, Kirsty’s Mortons flock from Lochend, Denny, led the sale of in-lamb females at North West Auctions’ Kendal centre on Saturday, 2 January, when they were knocked down for 1700gns and 1600gns. 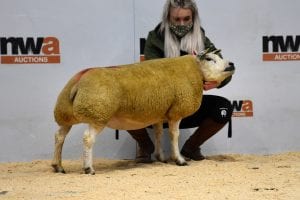 Dearest was the last entry on offer, Mortons Elsie ET, a daughter of the Belgian ram, Willy Nine Hundred, bred from the Airyolland Galliano-sired Mortons Whammy. Having ran with the 10,000gns Gyffin Dexter and scanned with twins, Elsie joins Alisdair Prickett’s Farleton House flock near Carnforth. 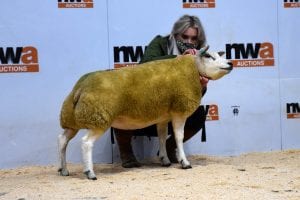 Making 1600gns when snapped up by Edward Benn for his Benndale flock near Cotherstone, Barnard Castle, was Elsie’s full sister, Mortons Edna ET, which also scanned for a pair to the 10,000gns Gyffin ram shared with the Buckles flock.

The Mortons’ first in, Mortons Engaged, sold for 1000gns to G Tyson, Ulverston, Cumbria. Offering some different breeding, this Hillview Charlie daughter is out of the Kingledores Battleaxe-bred Mortons Cassie and changed hands carrying triplets to Wannop’s FCUK. 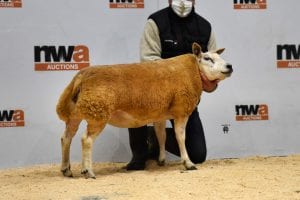 Two sold for 1100gns apiece with the first of these being Mike Davis’ substitute entry, Rathbone Eager from the flock at Eldroth, Austwick. Selling to Gordon Gray for his grandchildren’s Ettrick flock near Lindean, Selkirk, Eager is by Belvoir View Derminator and out of the Drumchapel Scooby daughter, Rathbone Waterlilly. She was due a single to the 9000gns joint purchase, Horseclose Eskimo. 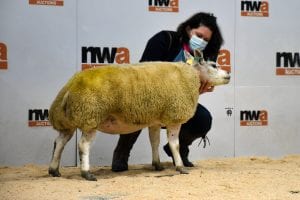 Matching that 1100gns was the first in from Karen and David Shuttleworth’s Heber Park flock from Gargrave, Skipton, in the shape of Heber Park Elisia. Scanned with a pair to Kingledores Endeavour, her sire is Jewitt Candyman while her dam is Heber Park Camilla, a daughter of Buckles Balmoral. She joins Mark and Ellie Jennings’ Hall Crake flock near Selside, Kendal.

At 1000gns and this time carrying a single to Kingledores Endeavour was Heber Park Emma ET which caught the eye of Ali Jackson of the Tip Top flock near Cummertrees, Annan. Out of the Kingledores Walter daughter, Heber Park Aphrodite, Emma is by Buckles Balmoral.