A shearling ewe once again proved to be the star attraction at the Northern Beltex Club’s sale of males and females at Kendal on Tuesday, 14 September, where shearling rams improved by more than £200 on the year for many more sold. 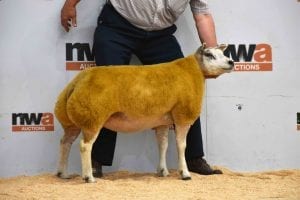 Leading the way at 2300gns was Brian Hall’s shearling ewe, Ainstable Emphatic, from the flock near Carlisle. Bred from the Hudhey Tenacious D daughter, Ainstable Afar, Emphatic is sired by Withy Trees Automatic Monkey and buying back some of their own genetics were Andrew and Claire Wood for their Withy Trees flock near Whittingham, Preston.

Brian also received 700gns from Alisdair Prickett, Farleton, Carnforth, for the very next lot and another by the Automatic Monkey sire, Ainstable Emerald. Her dam is Ainstable Willful, by an imported ram.

Sticking with the females and James Bailey, from Hunton, Bedale, saw his Ivanhoe Epic also sell to Mr Prickett, who bought a total of six gimmers to join his Farleton House flock and paid 750gns for Epic. Sired by the home-bred Ivanhoe Blaze, she is out of the Airyolland Wee Jimmy daughter, Aviemore Alicia 4. 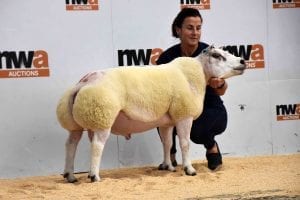 Among the males it was Andrew and Claire Wood’s Withy Trees flock that topped the trade when their first two sold for 1200gns and 1050gns, respectively. Dearest when also knocked down to Mr Prickett was Withy Trees Enrico, whose pedigree features Jewitt Blazing Heat on to Garla Cassiopeia, by Artnagullion Worzel. 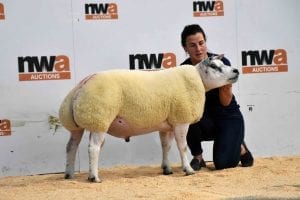 At 1050gns when sold to P and JM Wilson and Son, Westhouse, Carnforth, was Withy Trees Everlast ET, this time sired by Matt’s Ducati and out of one of the flock’s foundation ewes, Woodies Rosalyn, a Ballydown Magnus daughter.

The last to break the four-figure barrier was the last shearling ram on offer, D Nisbett’s Woodhow Einstein ET from Wasdale, Seascale. Sired by Skiddaw View Busby Babe and out of the Broxty Supreme-bred Buckles Belinda, Einstein caught the eye of R Wilson and heads to Appleby.

The Woods paid 800gns for the dearest of the aged rams, Dean Brow Carlos ET from Stuart Currie, Rathmell, Settle. Originally bred by Harry Wood, Carlos is by Matt’s Abracadabra while his dam is Dean Brown Willow, a daughter of an imported ram.