Making it a hat-trick of sale leaders three years on the trot for Alfie Taylor’s Heatheryhall flock, a ram lamb topped the Beltex Scotland Club sale at Lawrie and Symington’s Lanark centre on Thursday, 17 September, when Heatheryhall Famous Grouse ET was knocked down for 4500gns. Demand was strong throughout as all averages improved on the year – with the ram lamb entry nearly doubling – and 35 sheep sold at 1000gns or above. 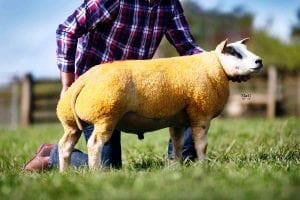 Sale leader at that 4500gns was Heatheryhall Famous Grouse ET, a son of the 30,000gns Buckles Dark Dawn which topped the 2019 Carlisle Premier Sale and has since produced sons which have sold for £10,000 privately. Famous Grouse is, in fact, a full brother to that £10,000 Heatheryhall Fireman Sam ET, being out of Heatheryhall Adele, a Quarrymount William Wallace daughter. He heads to work in father and son duo, David and David Cunningham’s Walkerdyke flock near Strathaven. 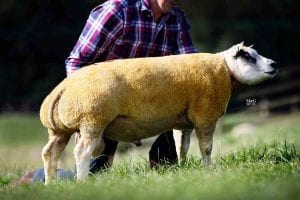 Alfie’s Heatheryhall flock from Pettinain, Lanark, saw the shearling pen sell well when seven changed hands to average £1350. Dearest here at 2400gns was Heatheryhall Extra ET, a full brother to the 2018 sale topper, the 3800gns Heatheryhall Campbell, being by Quarrymount William Wallace and out of Heatheryhall Wallflower, a Tacherhill Regal daughter. Buying back some of his own genetics was JR McKay for the Tacherhill flock near Sorbie, Newton Stewart.

At 1300gns was Heatheryhall Edmond which is again backed by strong genetics for the Lanark sale being out of the Graham’s Tosh-sired Heatheryhall Beauty which also bred last year’s 3600gns sale topper, Heatheryhall Deric. Sired by Aviemore Dane Hill, he caught the eye of BR Lawson and heads to work in North Yorkshire near Richmond. 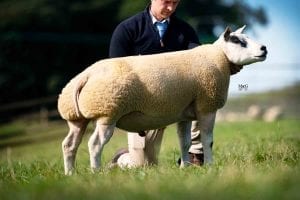 Andrew Wainwright’s Todhall pen of shearling rams from near Cupar also sold away well with the second highest price of the day of 3200gns paid by JW Gibb, Biggar, for Todhall Eddie ET. His sire is the 10,000gns Callacrag Bull’s Eye which sold for 2600gns as an aged ram at this year’s Premier Sale, while his dam is Todhall Tinga, a Woodies Pride of North daughter which also produced the 5000gns gimmer, Todhall Beth. 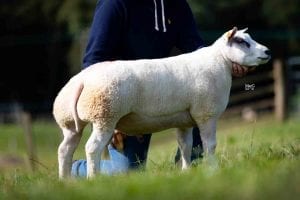 Ram lambs met a cracking trade throughout with the second highest lamb price of 2200gns paid for Tullylagan Figo ET from the Hammond lads from Darvel, Ayrshire. He is the result of a flush of the Fingle Cobra daughter, Beechcross Demi, and Callacrag Wise Crack. He sold over the phone to G Scott, Newton Stewart, Northern Ireland.

The Hammonds, who sold seven ram lambs to average £1133, saw Figo’s full brother, Tullylagan Ferrari ET, realise 1200gns when chapped down to A Padkin for the Padkin flock near Thornhill, Dumfries.

Back to the shearling rams and Ryder Ezra ET from Brian Ryder, Annan Water, Moffat, sold to Jimmy Young for the Muirton flock near Alford, Aberdeenshire, for 2100gns. A full embryo brother to the 14,00gns Ryder Enrique sold at Carlisle last month, Ezra is by Aviemore Casual and out of the Ryder Wee Willie Winkie-sired Ryder Anneka. 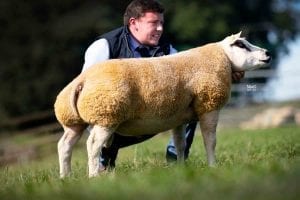 Close behind on 2000gns was Alasdair MacLean’s Vicky’s Excaliber ET, which was bought at Carlisle last year to join Alasdair’s Tiree flock on the Hebridean island. Also selling to the Padkin flock, Excaliber is by Murrays Crackajack while his dam is the Glenkeen Sanders daughter, Woodies Athens.

The sale got off to a good start when the very first lot, an aged ram named Osprey Candyman which was used in William Lennox’s Netherholm flock near Strathaven since his purchase as a lamb, sold for 1600gns. His pedigree features Procters Aerosmith on to Drumchapel Saffron, by Kingledores Rascal, and forking out the cash was John Brown near New Deer, Turriff.

Selling to John Scott for the Fearn flock near Tain, was James Hamilton’s Mid Shawtonhill Eclipse, a Woodies Cover Story son bred from Tercrosset Whip Round, herself by Airyolland King of Clubs in the flock at Chapelton, Strathaven.

Two sold for 1350gns apiece with the first of these being Cameron Currie’s Corbelly Electron, a Wern Deio son from the Dumfriesshire flock. Bred out of a home-bred Woodies Samson daughter, Electron heads to work near Muthill, Perthshire, for John Guthrie.

Ronnie and Peter Black saw ram lamb entries from their Collessie flock from Ladybank, Fife, peak at 1350gns for Collessie Foreman ET. Sired by Todhall Derry and out of the Glantre Reece-bred Bryngroes Waterfall, Foreman sold in a two-way split to W Thomson, Darvel, Ayrshire, and Alan McLarty, Crawfordjohn, Biggar.

Two shearlings hit 1250gns including Gordon and Lynsey Carroll’s Edendiack Eerie from Gartly, Huntly, which was snapped up by Jimmy Bell for the Carnwath-based Cottage flock. His pedigree features Kingledores Destroyer on to Aviemore Carol.

Matching that 1250gns when sold to E McIntosh, Rhynie, Aberdeenshire was the first in from the Cochrane family, Darvel, in the shape of Cochrane’s Extreme. Used as a lamb, he is by Hackney Comb Over and out of a home-bred Callacrag Avicii daughter. 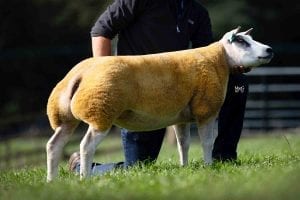 It was a good day’s trading for Kenny O’Connor when shearling ewes from his local Kenny’s flock from Carstairs Junction, Lanark, topped the female entry at 1550gns and 1450gns. Selling to the Lawrie family’s Grangehall flock, near Lanark, was Kenny’s Extra Special ET, a daughter of Broxty Bruiser bred from the 2015 Scottish National Show champion, the Clary Pink Panther-sired Callacrag Sugar. 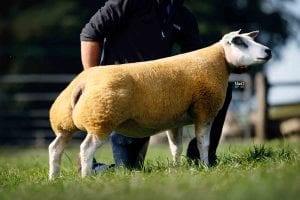 The previous lot, Kenny’s Elegant ET, sold to Tom Linton for his Clyde flock near Cleghorn, Lanark, for 1450gns. Her pedigree features Mortons Cheeky Boy on to Kenny’s Avalanche, a Clary Prankster daughter.

John Cowan saw his Brickrow Elaine sell to Donald McVicar for his Fyne flock near Strachur, Argyll. Bred from Brickrow Buckaroo, she is by Beckbred Crusader.