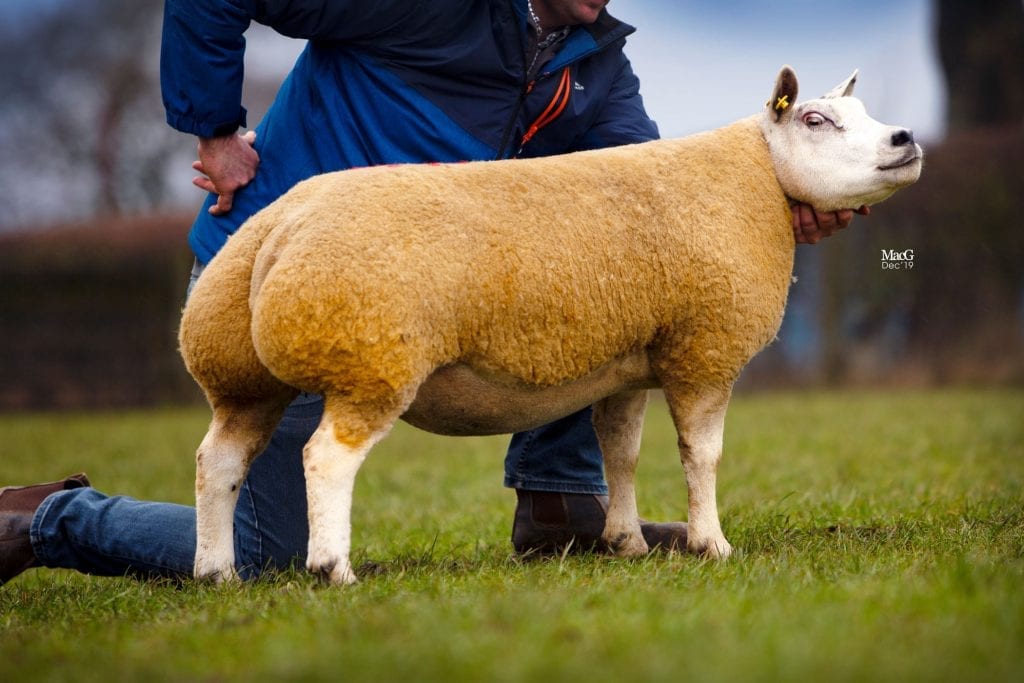 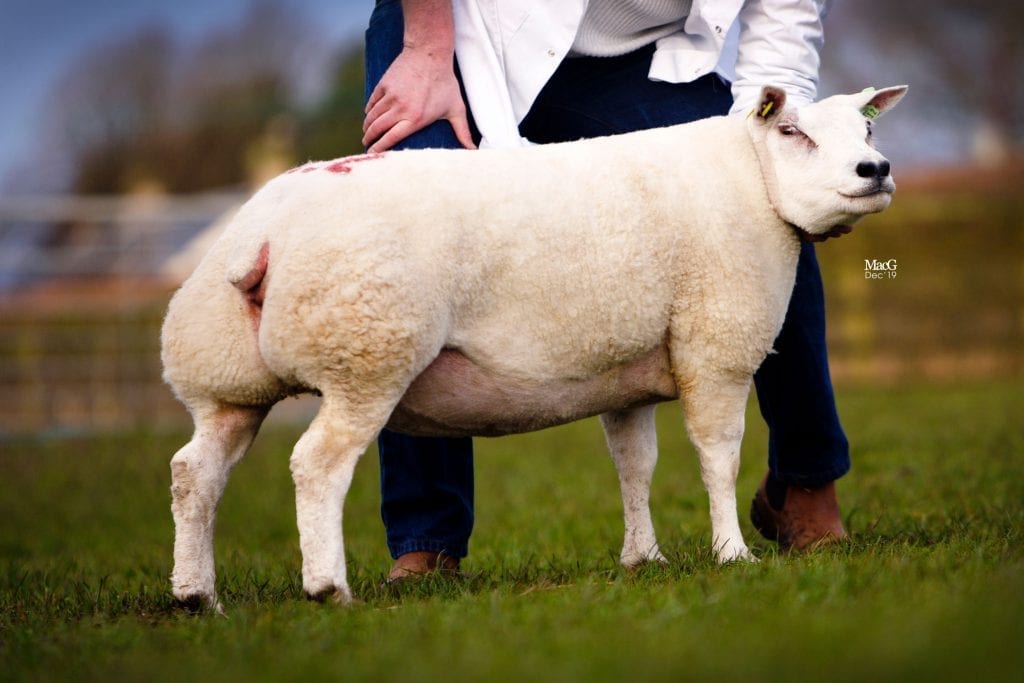 A SHEARLING ewe from Alfie Taylor’s Heatheryhall flock proved to be the star attraction at Beltex Scotland’s sale of in-lamb females and empty ewe lambs at Lawrie and Symington, Lanark, on Saturday, 14 December, when Heatherhall Dorothy ET claimed the championship before selling for the top price of 5,000gns.

This year’s show show gimmer from the flock near Pettinain, Lanark, which stood first at Lesmahagow Show and second at Bigger, Dorothy out of the Clary Prankster ET-sired Heatheryhall Wanda, the same ewe that produced the £3,200 shearling ram sold at Kelso last year. Sired by the 2,800gns which also bred the 3,600gns Heatheryhall Deric sold in September, Dorothy is the only female to sell in-lamb to the 30,000gns Buckles Dark Dawn ET and was knocked down to Andrew and Claire Wood for their Withy Trees flock, Whittingham, Preston, scanned with twins. 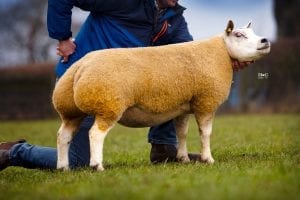 Sticking with the main sale, three more from the Heatheryhall flock were in the money and next at 580gns was Heathyhall Dora, this time by Rathbone Aggressive and out of Heatheryhall Angie. She sold to the Ballantynes for their Roadend flock near Strathaven, scanned with a single to Lurg Emperor ET.

Two made 500gns when sold to Murray Stevenson, Girvan. First was Heatheryhall Dimples, again by Skiddaw View Boggle ET and carrying triplets to Lurg Emperor, while the Rathbone Aggressive ET-sired Heatheryhall Dazzle was scanned with twins, also to the Lurg lamb.

The reserve champion, Shawtonhill Donna from Robert and James Hamilton, Chapelton, Strathaven, sold to Alasdair MacLean for his Tiree flock on the island for 800gns. Scanned with a single to the home-bred Double O Seven-sired Shawthonhill Deacon Blue ET, Donna is by Heatheryhall Batman ET and out of Shawtonhill Tilly-Rose. 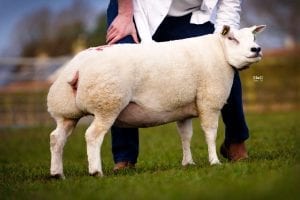 The offering of females from Andrew Baillie’s Callacrag flock, Carstairs, and the Dunlop family’s Corstane and Broughton flocks, Biggar, proved popular, with the Callacrag entry peaking at 4,000gns.

Hitting that price was Callacrag Billie, a 2016-born ewe by Eildon Wolverine and out of Callacrag Sunflower, a Callacrag Rocky ET daughter. Billie was the flock’s show ewe this year, standing inter-breed champion at Carnwath, and sold to veterinarian and new breeder, Neil Laing, near Thankerton, Biggar, carrying a pair to Clary Desperado. As luckpenny, Neil received a recipient ewe carrying an embryo that was the result of a flush of Billie to Lurg Emperor ET. 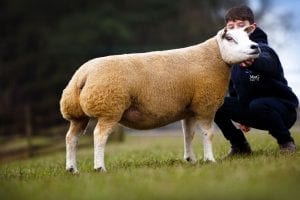 Neil paid a further 2,600gns for Callacrag Dale which sold scanned with twins to Clary Desperado, a 10,000gns purchase in 2018 which sired the champion pair of prime lambs at LiveScot. This gimmer is by Airyolland Cotton Eyed Joe ET and out of Callacrag Wham, a Langlands Rainbow Warrior ET daughter. 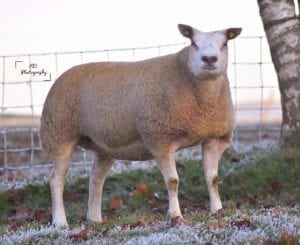 The 2015-born Callacrag Anastasia ET realised 3,200gns when sold over the phone to Alan Miller for his Lurg flock near Inverurie. Another carrying twins to Desperado, her pedigree features Quarrymount William Wallace ET on to the Clary Navy-sired Callacrag Redemption. 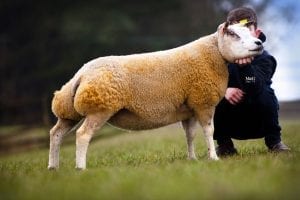 Jock McMillan paid 2,100gns and 1,700gns to secure two shearling gimmers for his Newton Stewart-based Clary flock. Dearest at 2,100gns was Callacrag Destiny ET, bred from a sister of the Anastasia ewe named Callacrag Aileen ET, and by Broxty Bruiser ET. Shown with success both this year and last, she sold carrying a single to Desperado. 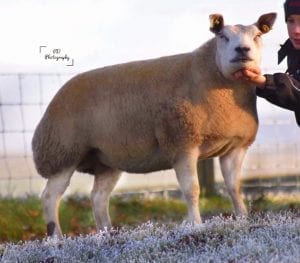 Selling to Mr McMillan for 1,700gns and scanned with a pair to Desperado was Callacrag Dam, which is by Callacrag Crack-A-Jack ET and out of Callacrag Adorable ET, another sister of Anastasia.

Anastasia’s breeding proved fruitful as a daughter, Callacrag Ellie, a naturally-bred quad born in March, realised 1,600gns when sold to Nick Gill and Kayley Kennedy for their Nikay flock near Kewick, Cumbria. She is a daughter of the popular Desperado with her sister, Callacrag Elegant, selling to Gary Morrison, of the Muldearie flock, Keith, for 1,100gns. 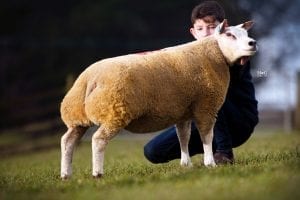 Callacrag Elizabeth ET, a February-born ewe lamb by Clary Desperado and out of Callacrag Aileen ET, sold to Messrs Stephen for their newly-formed Glencoe flock near Nairn for 1300gns.

Two hit the 1,000gns mark with Callacrag Brainwave, an Eildone Wolverine daughter, selling to Alasdair MacLean, Tiree, for 1,000gns carrying one to Desperado, while the Callacrag Cowboy-sored Callacrag Darla ET sold to Michael Russell, of the Biggar-based Lamington flock, scanned with twins to Desperado.

The Corstane and Broughton reduction from Mary Dunlop and son, Andrew, topped at 1,200gns for Broughton Beckie ET, which is by the popular Callacrag Wise Crack and out of Broughton Starlet, a Woodies Ringleader ET daughter. Selling to Ian Reid for his Osprey flock near Methven, Perth, she changed hands carrying two to Ardstewart Aristocrat ET, a former Premier sale champion which has sired rams to 5,000gns. 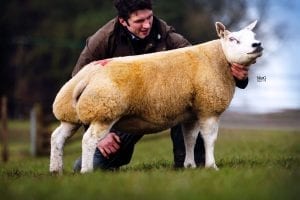