Beltex sheep continue to meet demand at Leek Auction where a new centre record of 2250gns was set on Wednesday, 18 August, for the Reserve Champion from the pre-sale show, a shearling ewe named Boothlow First Class from Tom and Jack Belfield. 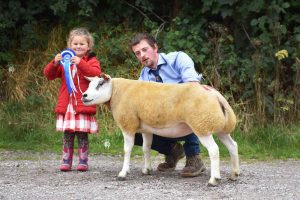 Leading the way was Boothlow First Class from young brothers, Tom and Jack Belfield, from Sheen, Buxton, which sold to local breeder, Ron Thomkinson for his new Rojan flock, near Butterton. Sired by the Broughton Cardhu ram that has bred well in the flock, First Class’ dam is Boothlow Desert Eagle, a Hackney Will.I.Am daughter. 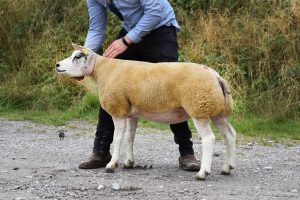 Mr Thomkinson paid a further 1150gns for the second prize shearling ewe, Boothlow Florida, which was again sired by Broughton Cardhu but this time out of the Rathbone Cuba daughter, Boothlow Debbie.

Among the males it was three entries from Andrew Wainwright’s Cupar-based flock that led the trade with two at 1200gns and another at 1000gns. 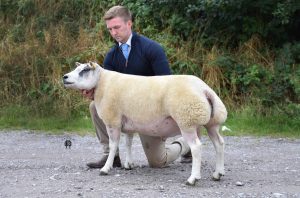 First to sell for that 1200gns price tag when knocked down to Mark and Caroline Hambleton for their Fiv Flock near Flagg, was Todhall Figo, a son of the 10,000gns Callacrag Bull’s Eye that has bred exceptionally well for Andrew and set many of the flock’s top prices. Figo’s dam is by Todhall D Best, herself by Rathbone Alien. 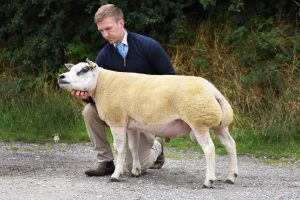 Also making 1200gns was the Champion from the pre-sale show, Todhall Famous, which sold to the judge, Dave Thornley for his Dooley flock, Diseworth. Offering some different breeding, this lad is by Woodies Extreme while his dam is the Kingledores Warrior daughter, Todhall Aphrodite. 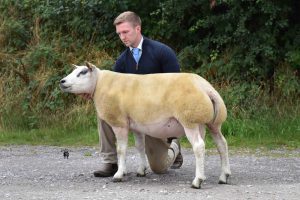 At 1000gns was another by Callacrag Bull’s Eye in the shape of Todhall Fernando, which is again out of a Rathbone Alien daughter, this time Todhall Chelsea. Fernando sold to AD Williams, Basford, Leek.

At 820gns when snapped up by R and S Bailey, Beat Lane, Rushton Spencer, was Todhall Fury, by Callacrag Bull’s Eye bred from Todhall Class Act, another by Rathbone Alien.

Brian Crane’s flock from Tockholes, Darwen, peaked at 850gns for Cranes Fisher, a son of Withy Trees Capricorn bred from Cranes Cassi, a Graham’s Wink daughter. He heads to a new home near Swythamley, Rushton Spencer, with JM Robinson.

A small offering of ram lambs and ewe lambs reached 680gns for Boothlow General ET from the Belfield brothers. Selling to Messrs Brassington and Renshaw, Ashbourne Road, Church Derby, this daughter of the flock’s show ewe, the Sharphaw Wade-sired Boothlow Berlinda, is by Buckles Eden Valley.