A pair of shearling rams from Richard and Rachel Sharp headed up the sale of males and females at the National Sheep Association ram sale held at Melton Mowbray Market on Saturday, 12 September, when they sold for 750gns and 720gns. 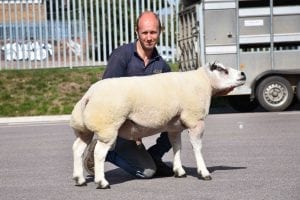 The sale met a strong demand throughout and it was the very last shearling on offer, Belvoir View Eco ET, that sold for the top price of 750gns. His pedigree features Mount Pleasant Minty on to the Dooley Adonis daughter, Belvoir View Crystal, and he heads to work near Peggs Green, Leicestershire, for MJ and RJ Howkins. 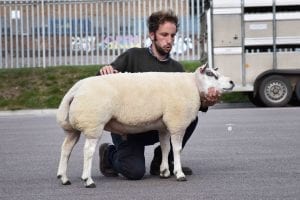 Also in the money for the Belvoir View flock from Eaton, Grantham, Lincolnshire, was Belvoir View Eagle 40, this time by Callacrag Cowboy and out of the Padkin Sugar Daddy-sired Belvoir View Cassie. Buyer here was J Redburn, Swannington, Leicestershire.

Selling for 600gns to RH, RG and JRH Holmes, Apley, Market Rasen, was the first to enter the sale ring, Brookhurst Ee By Gum from Mrs JA Longhurst, Raunds, Northamptonshire. His pedigree features Bishops Calais on to the Hafod Roland-bred Brookhurst Thelma.

Shearling rams also reached 580gns for Victoria Bowring’s Windmill Emperor from the flock near Nether Langwith, Mansfield. Selling to A Brown, Ridgeway, Derbyshire, this Matt’s Dancer son is out of Windmill Amazing Grace, by Beechcross The Mr T.

Topping the ram lambs at 500gns as Brothertoft Ferguson ET from Chris Wright, Boston, Lincolnshire. Sired by the 10,000gns Woodwick Brave Heart, his dam is the Jewitt Awesome Wild One-bred Brothertoft Clementine, and he sold to R Richins, Martson, Oxford. 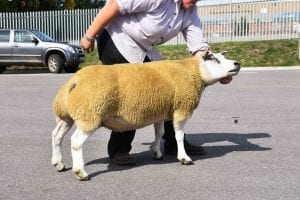 Evan Jones paid 650gns for the top price female to join his Merton Hall flock near from Smithy Fen, Cambridgeshire. Consigned by F and A Robinson, Scamblesby, Louth, Lincolnshire, Beachy Destin To Dream ET was originally bred by John Barclay. Sired by Kingledores Battleaxe, she is out of Beachy Tooty Fruity, a Kingledores Rascal daughter.

Hitting 600gns was Matthew Prince’s Stonedge Ebony ET, a Broughton Willie Wonder daughter from the flock near Ashover, Chesterfield. Selling to Chris Wright of the Brothertoft flock, she is out of the Orkney Something Special-sired Clary Westie.

Entries close at 5pm TODAY for our commercial flock competition and it’s a grand day to be working with sheep so no excuses 😉 ... See MoreSee Less

Well done to all the young enthusiasts taking part in our young handlers competitions, and a special well done to Lucy Jones for taking the champion honours with Ramsay McKnight in reserve, as judged by Kaitie and Robbie Aiken. “Robbie and I both thoroughly enjoyed judging the classes and we must thank the exhibitors for taking the time to prepare and show us their sheep, said Katie. ... See MoreSee Less

Don’t forget about our Commercial Flock competition, entries open to ANYONE with Beltex-bred sheep and classes include:🐑 Group of commercial ewes (up to 10)🐑 Group of commercial shearling ewes (up to 10)🐑 Group of up to 20 commercial lambs (class split for lowland/upland dam)🐑 Trio of ewe with twinsSend your video entries (up to 30 seconds) to Kayley via WhatsApp on 07375 563809 along with your name and farm name by 5pm on Sunday, 1 August, and see the website for full guidelines. 📷 A MacLean, Tiree ... See MoreSee Less

Disappointing number of entries for the Young Handlers competition but that doesn't mean the quality isn't there with some great young enthusiasts showing off their sheep. Instead of spreading the classes over three days, here they are in a oner and results will be announced once our judges, Katie and Robbie Aiken, Procters, have given them a look over. ... See MoreSee Less

A wee reminder re closing dates for sales we have so far... ALSO a BIG reminder for Leek sale please, please get entries into the office on time as it will be temporarily closed from Friday 30th July with occasional visits to collect mail etc. ... See MoreSee Less
View on Facebook
· Share