Melton Mowbray ewes with lambs – 1 May

Females reached a top of 700gns at the Beltex Sheep Society’s offering of ewes with lambs and empty ewe hoggs at Melton Mowbray Market’s May Day Spring Fling sale on Saturday, 1 May. 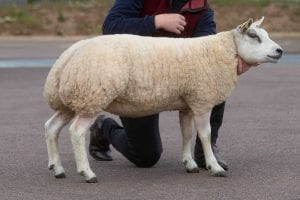 That top price was paid for the first hogg on offer from Victoria and Gillian Bowring’s Windmill flock from near Nether Langwith, Mansfield, in the shape of Windmill Fluer. This Bronic Ego-sired single is out of the Todhall Superstar daughter, Black Jack Big Bad Muma, and caught the eye of new breeder, Tina Blythe, who takes her back to Langrick, Boston.

Tina paid a further 420gns for the very next lot, Windmill Flower, another by Bronic Ego but this time out of Windmill Addition, herself by Tiptop Thunder Jam.

The second highest price of 500gns was paid by Georgina Crabtree of the Crabtree flock, Great Horwood, Milton Keynes, for Windmill Fairy. She offers some different breeding being out of the Gregor’s Bentley-bred Windmill Dior and sired by Matt’s Dancer. 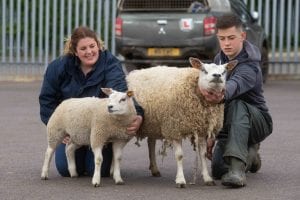 Ewes with lambs peaked at 450gns for Broughton Amy, a 2015-born ewe from Chris Wright, Kirton Drove, Boston, but originally bred by Andrew and Michael Dunlop. This Broughton Willie Wonder daughter is out of Broughton Lilias, a Corstane Kubla Khan daughter, and sold to Matt Prince for his Stonedge flock near Chesterfield along with her single ewe lamb at foot, Brothertoft Goody Two Shoes, by Bodoney Ecstatic.