Newark Ewes with Lambs at Foot

The Beltex Sheep Society made a welcome return to Newark Livestock Market for the Spring Selection Sheep Fair where entries from north of the Border led the trade. 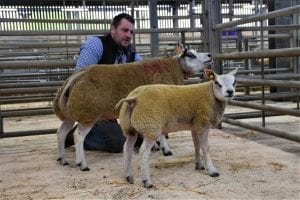 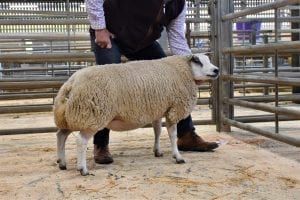 Stuart Wood’s Woodies flock all the way from Woolhillock, Skene, Aberdeenshire, was also in the money and received a top call of 1100gns for a ewe hogg named Woodies Diva. Sired by the 8000gns Woodies Beyond Limits and out of the Bishops Arnold daughter, Bishops Blue Eyes, she heads back north to a new home at Miller Farms, Midmar, Inverurie.

Mr Pickford, Mersham, Ashford, paid 850gns for a pair of embryo lambs, Woodies Exot ET and Woodies Ella ET, and their recipient dam. This ram lamb and ewe lamb are out of one of the flock’s best import ewes and by the 5000gns Bailey Brook CR7.

Another Woodies sheep to make the journey north, this time to Dufftown, Morayshire, with SW Robertson, was Woodies Daze ET. Sired by Airyolland Weapon, she is out of an import named Notice de Quatre Vents and was knocked down for 850gns.

Also selling to SW Robertson, this time for 650gns, was Woodies Daffodil ET, which is out of a V/D Harlembois ewe which also produced the first prize ewe lamb at last year’s Royal Highland Show. Her sire is Cothi Champ.

At 550gns was Woodies Disco Diva ET, which heads to Monyash, Bakewell, Derbyshire, with MJ Wells and Son. Her pedigree features imported bloodlines and her sire is the noted Double O Seven.

The Fenwicks paid a further 500gns for Belvoir View Cuddle Me and her Callacrag Cowboy-sired ewe lamb, Belvoir View Esther. Out of another Clary Twitter daughter, Belvoir View Amelia, she is by a Curwen Hill tup.