A shearling ram from James and Belinda Kimber’s Beanhill flock from Christian Malford, Chippenham, topped the Beltex offering at the NSA South West region sale held at Exeter Market on Wednesday, 19 August, when he was knocked down for 950gns. Demand was strong at the sale where the overall average improved by nearly £50 per head for more sold compared to last year. 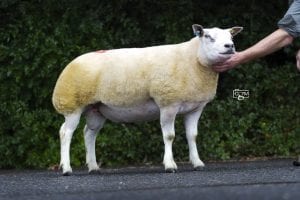 The unnamed ram, KPC.E4470, is by the Fingle Colonel ram bred by fellow South West Club member, Louise Elworthy, while the dam is a home-bred Powerhouse Armani daughter. This lad caught the eye of SG Harraway who will taken him to work in the Lilac Farm flock near Merk Road, Burtle.

Three sold for 600gns apiece with the first of these being John and Gillian Howieson’s Talewater Chelsea, from Wheddon Cross, Minehead, a 2017-born ewe originally bred by RJ and C Kirby. By Dooley Astroid and out of the Airyolland Sultan-sired Talewater Willy-Nilly, she sold to Amy and Sandra Payne for their Windsor flock near Cubert, Newquay.

The second at 600gns was Grady Dufosee’s Spectra Edgar from the flock at Longbridge Deverill, Warminster. Selling to J Lakehurst, Hinxhill, Ashford, Edgar is by Freckleton Wolverine while his dam is a Charndon ewe by Headlind Tofty.

Also hitting the 600gns mark was Louise Elworthy’s Fingle Enterprise, a shearling son of the imported ram called The Bare Boy from the flock at Crockernwell, Exeter. Bred out of Fingle Abbey, a Teign Valley Saracen daughter, he sold to PL Heard, Okehampton, Devon.

Mr Dufosee sold a further two Freckleton Wolverine shearlings sons to J Lukehurst for 580gns and 550gns. Dearest at 580gns was Spectra Elias, this time out of the Lamberhurst Midas daughter, Charndon Romantic Girl, while at 550gns was the very next lot, Spectra Ezra, which is out of Spectra Bellatrix, a Taliaris Rowland daughter.

Matching that 550gns was Bursyepark Elusive Enchantment from Lorna and Victoria Gregory, Boyton, Launceston. Selling to E Pearse, Colebrook, Crediton, this shearling is out of a Bishops ewe by Cochrane’s Nimrod while his sire is Matt’s Dare.

The Payne ladies bought another from the Howiesons in the shape of a shearling ewe named Lamberhurst Erin for 520gns. Again sired by Dooley Astroid, she is out of Lamberhurst Alice, a Windsor Tommy daughter.

A shearling ram from Louise Elworthy also realised 520gns when Jack Simpson paid that to take Fingle Ellis to work in his Hunrosa flock near Yeolmbridge, Cornwall. This Swelle Dude son is out of a Charndon ewe by Headlind Takeover.