A ram lamb, Riverview Fury, from Omagh-based Beltex breeder, Stuart Graham, achieved the top price at the Irish Beltex Sheep Breeders’ Club’s evening sale at Richard Beattie Livestock Sales in Omagh when it sold to Wade and Alison McCrabbe from Donegal for 1440gns. 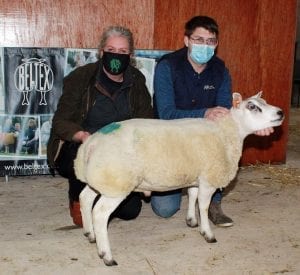 Sired by Tweeddale Dynamite ET the dam was Kingledores Daphne. A lot of interest was shown in this lamb and bidding was brisk. There was a good turnout on the night and other good prices were achieved. 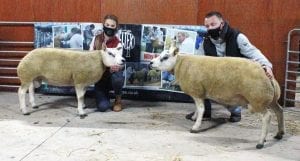 Kenny Preston, also from Omagh, got 800gns for Glenpark Elpaso ET, a shearling ram sired by Wern Domino and out of Langlands Buttercup ET. Glenpark Embrace, another shearling ram from Kenny Preston, achieved 580gns. Sired by Airyolland Blackthorn the dam is Artnagullion Chumba Wumba ET. Both were purchased by Chris Gourley from Castlederg. 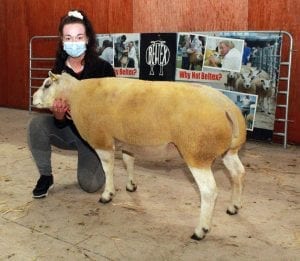 The hammer went down at 600gns for Glenarm-based Hugh O’Neill’s Lagyveagh Esquire. This well-proportioned shearling ram is sired by an imported ram named Gritter and is out of Lagyveagh Wild Peaches. It was purchased by the Boyd family from Drumquin.

Coming close was another from the O’Neills’ with 580gns paid for Lagyveagh Everest. Sired by Munreary Concord ET the dam is Cranes Crystal. Purchaser was Raymond Bowden from Stewartstown.

Lagyveagh Eloquent, Lagyveagh Emily and Lagyveagh Edit, all from Eddie O’Neill, sold for 400gns each

Dermot Murray from Downpatrick achieved 520gns for Bonecastle Easy Rider. Sired by Ainstable Ballast, the dam is Bonecastle Brandy. The purchaser was Margaret Crockett from L’Derry.

A total of 37 MV accredited and scrapie monitored pedigree Beltex sheep went under the hammer at this evening sale at Beattie’s, a new venue for the Irish Club. The sale was carried out under the auspices of the Beltex Sheep Society and the Irish Beltex Sheep Breeders Club.