A new record for a Beltex shearling ram was set at the Welsh Beltex Club’s sale at Ruthin Farmers Mart on Wednesday, 16 September, when Aled Roberts’ Greenvale Electrode ET was knocked down for 1900gns. The sale saw averages increase in all sections compared to the 2019 sale with yearling ewes and ram lambs both improving by more than £100 per head, while shearling rams improved by nearly £40. 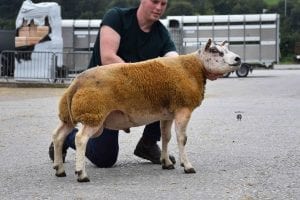 Electrode, a substitute entry from Aled’s Llanrhaeadr, Denbigh-based flock, is sired by the Staddlestone Carmichael ram that has bred many top prices for the flock, while his dam is the Artnagullion Spencer-sired Brickrow Winnifred. This lad caught the eye of mother and daughter duo, Anne and Rachael Story, who will put him to work in their Borderesk and Rachael’s flocks near Longtown, Carlisle. 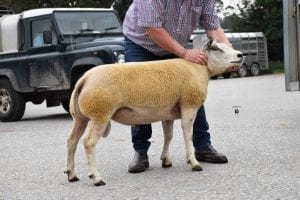 The Owens saw further shearling ram entries sell for 880gns, 820gns and 800gns. Dearest here at 880gns when sold to RH and HW Roberts, Llansannan, Denbigh, was Glantre Erick, this time by Airyolland Conan and out of Glantre Tegwch, by Woodies Scooby Doo.

HJ and FJ Williams, Bala, Gwynedd, paid 820gns for the Ardstewart Aragon son, Glantre Elwood, which this time is out of Glantre Carys.

At 800gns was another Ardstewart Comanche son, Glantre Europe ET, which sold to D Jones, Llansannan, Denbigh. His dam is Glantre Astra. 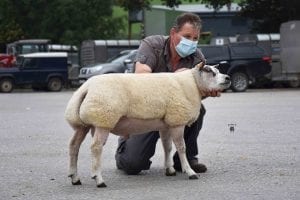 The other entry at four figures was Dylan Hughes’ ram lamb, Tredath Formidable, from the flock at Amlwch, Anglesey. Selling to Dafydd Lewis for his Cothi flock near Llanwrda, Carmarthenshire, Formidable’s pedigree features Hillview Eclipse on to the Dean Brow Avalanche-sired Tredath Davina.

Wyn Evans, Llanarth, Ceredigion, welcomed 900gns and 850gns for Cerin Edwyn and Cerin Eifion. Selling to M and S Jones, Oswestry, for 900gns, Edwyn is by the home-bred Ceryn Colin while his dam is Cerin Wendra.

Eifion, this time by Cothi Bush Hogg and out of Cerin Stargirl, sold to Williams Brothers, Glanrafon, Corwen, for 850gns.

Of the aged rams, it was Dafydd Lewis’ Cothi Dragon Fly that led the section at 800gns when sold to D Hughes, Aberffraw, Anglesey. Bred from Cothi Top Placing, his sire is Wern Athrylith. 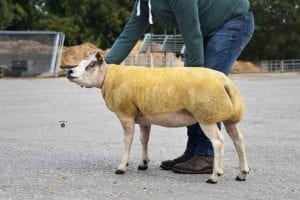 Among the females, Mathew Jones’ Glan-Y-Mor Eleanor sold for the top price of 800gns when the shearling ewe sold over the phone to Scottish breeder, Donnie Allan, for his recently established Ballochneck flock near Stirling. Sired by the imported ram known as Alligator, Eleanor is out of Glan-Y-Mor Arianna, by Glan-Y-Mor Sam.

Another Alligator daughter from the flock near Talsarnau, Gwynedd, sold for 650gns to Wil Evans for his Myna flock, Bodorgan, Anglesey. Glan-Y-Mor Empress is out of another by the home-bred Sam ram, Glan-Y-Mor Alice.