Shearling rams from Michael and Heulwen Owens’ Glantre flock met the best of the trade at the Welsh Beltex Club sale at Ruthin Farmers on Wednesday, 15 September, when they sold four of the five rams at four-figure prices.

This resulted in an improved shearling ram average of £577 for 61 sold (up £30 for five more sold compared to 2020), while trade proved stickier in other sections. 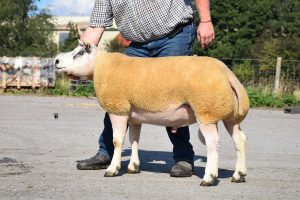 Leading the Owens’ entry at 1400gns was their Reserve Male Champion from the pre-sale show, Glantre Five Star, a son of Airyolland Conan bred from the Airyolland Sundance-sired Glantre Bigonia. He caught the eye of T and E Jones and heads to work near Llanllyfni, Caernarfon.

Two made 1000gns with the first of these being Glantre Flashy, this time out of the Glantre Tommi-sired Glantre Bridget from the flock at Pontsian, Llandysul, and by Artnagullion Dupe. He sold to J Howleson, Wheddon Cross, Minehead.

Matching that 1000gns was another by the Airyolland Conan sire, Glantre Franko, which sold to GP Owen, Tudweiliog, Pwllhelo. His dam is Coleshill Brandy, a Lyonpark Thunder daughter. 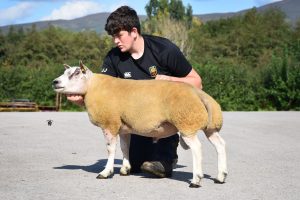 The only other ram to hit four figures was Dafydd Owen’s Smart Ass Fashion ET from Rowen, Conwy. Sired by the home-bred Smart Ass Dark Horse sold to the Clary flock, Fashion’s dam is Smart Ass Alys, herself by the imported Dean V/H Vrijbos ram. He was knocked down to David Heath, Hockenhull, Tarvin. 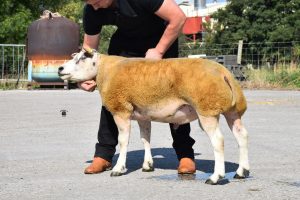 Also making 950gns was the Supreme Champion, Dafydd Lewis’ Cothi Freddy, again featuring home genetics being by Cothi Doctor and out of Cothi Country Dancer, herself by Cothi Stripper from the flock at Cwrtycadno, Llanwrda. He sold to IRH Bebb, Llanwddyn, Oswestry. 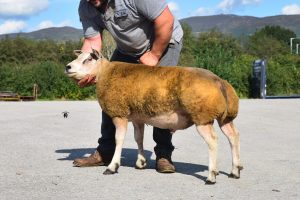 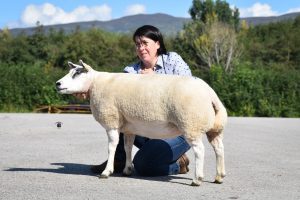 The female entry was led at 600gns by the Reserve Supreme Champion, Judith Bevan’s Coleshill Foofoo which sold to Tom Goldsmith, Goldsmith flock, Moseley Road, Hallow. Sired by Lyonspark Carrick, her dam from the flock on Holywell Road, Flint, is the Glantre Ammunition-sired Coleshill Darleen. 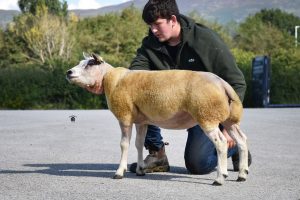 The Reserve Female, Dafydd Owen’s Smart Ass Frankie, sold to Tirion Griffiths for his Ty Isa flock, Derwen, for 500gns. She is by Clary Dumfries and out of Smart Ass Disarano, herself by Ardstewart Aristocrat.