Shearling rams met a whopping 92% clearance rate at the Northern Beltex Club’s sale of males and females at CCM Auctions’ Skipton mart on Saturday, 4 September, where averages improved on the year in all male sections, a top price of 7000gns was set and 14 rams sold at 2000gns or above. 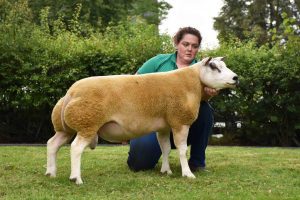 Leading the way at 7000gns was the first in from the Irish raider, Libby McAllister and her brother, William, who run the Artnagullion flock near Kells, Ballymena, in the shape of Artnagullion Feux. He is sired by the 3000gns Greenall Dennis The Menace bought here for 3000gns two years ago that has since bred many top prices for the brother and sister duo, while his dam is Artnagullion Aimee, herself by another influential flock sire, the 9000gns Rathbone Tony. After some swift bidding, Feux was knocked down to James Whiteford for his Tercrosset flock near West Hall, Brampton. 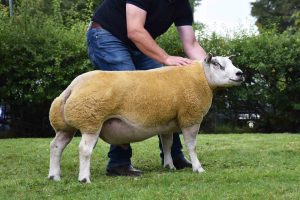 Sticking with the shearling entry and the next best price in this section of 3400gns was paid by Rory Gregor and Ross and Kirsty Williams who take Brian Hall’s Ainstable Falsified up north to work in their Gregor’s and Black Jack flocks, respectively, in Aberdeenshire. Buying back some Black Jack breeding, Falsified is sired by Black Jack Casanova while his dam is Ainstable Aviary, a Hudhey Tenacious D daughter. 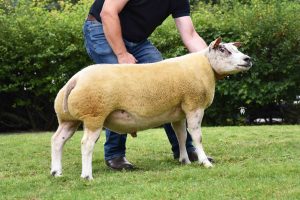 It was a good day’s trading for Brian, from Ainstable, Carlisle, whose pen of ten levelled at £1680 and also sold to 3200gns and 2200gns. Making 3200gns was the Reserve Male from the pre-sale show, Ainstable Ferocious, which caught the eye of John Cowan who will put him to work in his Brickrow flock near Auchincruive, near Ayr. This time sired by Kingledores Engleburt bought here as a lamb for 3200gns two years ago, he is out of the Woodies Wicked daughter, Ainstable Balderdash.

At 2200gns when sold to local producer EG Thornalley, Hellifield, Skipton, was another by the Engleburt sire in the shape of Ainstable Fanatic ET, which this time is out of Ainstable Danube, a Withy Trees Automatic Monkey daughter. 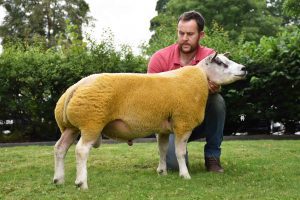 Early on in the sale, two rams sold for 3000gns apiece with the first of these being Greenall Furious from John Green, Lilliesleaf, Melrose. With a pedigree featuring Dean Brow Carlos on to the Cynin Amazon-sired Beautry Charlene, Furious was chapped down to Steve Buckley, Dove Holes, Buxton. 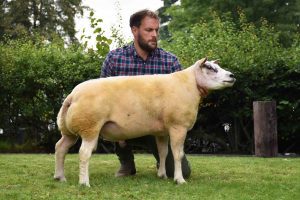 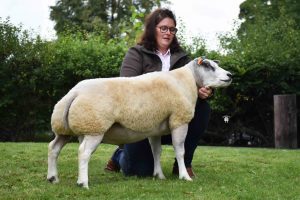 Up next were two at 2400gns and first through the ring was Heber Park Forbes from local husband and wife team, David and Karen Shuttleworth, Gargrave, Skipton. Selling to James Wannop for the Wannop’s Farms team’s Wannop’s flock near Heaton-with-Oxcliffe, Morecambe, this Jewitt Candyman son is out of the Corra Wally-sired Heber Park Cameo. 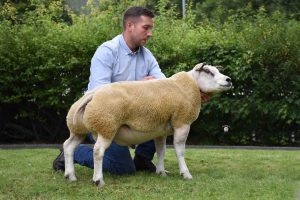 Local breeder William Beckwith welcomed bids of 2200gns and 2000gns, with his dearest, Sharphaw Fairman, selling to the Buckles family for their Buckles and Broxty flocks near Barras, Kirkby Stephen. Fairman, which was Beltex Champion at Kilnsey Show, is by Buckles Cornflake while his dam is Sharphaw Claudia, an Aviemore Amaflier daughter from the flock at Gargrave.

The very next lot, Sharphaw Felix, then sold to Samantha Asquith for her Riverside flock near Otley, West Yorkshire. Featuring similar breeding, Felix is again by the Buckles Cornflake tup and out of an Aviemore Amaflier daughter, this time Sharphaw Cynthia.

Matching that 2000gns was Jock McMillan’s Clary Flash You which is by Woodwick Chino and out of a Belgian V/H Vrijbos ewe from the flock near Newton Stewart. He caught the eye of local producer PW Simpson and heads to work near Wigglesworth, Skipton. 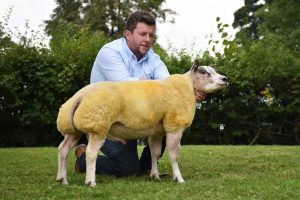 On to the ram lambs and Matt’s Goal Keeper ET from another Irish raider, Matthew Burleigh, Shanra, Enniskillen, achieved the second highest price of the day when he sold to Jack Monk of the Monks flock near Mellor. His sire is the 14,000gns Murrays Expert bought at the Carlisle Premier last year, while his dam is a Hackney Corker daughter in the shape of Matt’s Dianthus. 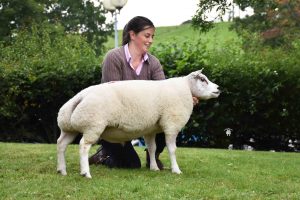 Following on at 3100gns was the dearest from Jock McMillan’s pen of lambs, Clary Granite ET, which sold to Anne Story for her BorderEsk flock near Longtown. Buying back some of her own breeding, Granite is by BorderEsk Leap Frog while his dam is the 2019 Highland Show Champion, Clary Delight, a Hackney Braveheart daughter. 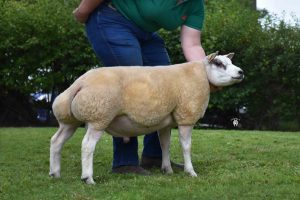 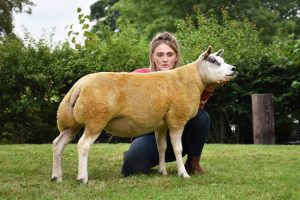 Females met a very selective trade with only three breaking the four-figure barrier. This section was led by the pre-sale Supreme Champion from first-time Skipton vendor, Dafydd Owen, from Rowen, Conwy. His shearling ewe, Smart Ass Fevertree ET, is by Arkle EZ Ryder, a full brother to the noted Arkle DJ, while her dam is Smart Ass Bonnie, a Dooley Napal daughter. Adrian and Kathryn Leach were behind the cash and take Fevertree back to their Owlers flock near Hebden Bridge, West Yorkshire. 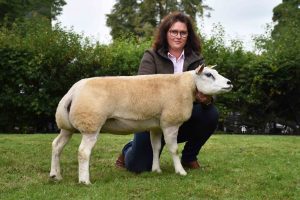 Not far behind on 1200gns was the Reserve Female Champion, Heber Park Frannie from Karen and David Shuttleworth, which sold to David Hargreaves to establish a new flock near Airton, Skipton. Again by the Jewitt Candyman tup that bred the 2400gns Forbes, Frannie is out of the Buckles Balmoral daughter, Heber Park Chakira.