While the absence of the usual show classes prevented Northern Ireland’s Matthew Burleigh from picking up an unprecedented fourth consecutive title at The Northern Beltex Club’s ninth annual winter sale of pedigree in-lamb females at Skipton Auction Mart on Saturday, 12 December, he did have the satisfaction of claiming the four leading prices. 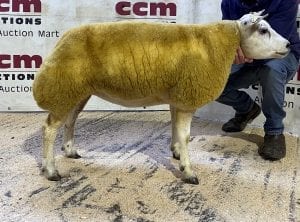 Making his annual foray across the Irish Sea, this year with a quintet of shearling ewes, Mr Burleigh, who runs the Matt’s pedigree flock at Shanra, near Enniskillen in Co. Fermanagh, secured top call of 1000gns with his home-bred Matt’s Endeavour, a March-born twin by the 3500gns Hackney Download, bred by the Tippetts family in Shifnal, Shropshire. Another 5000gns tup from the same home was responsible for Matt’s 2019 Skipton title winner. With the 3400gns Hackney Warrior in the dam line, the 2020 top price performer was sold carrying twins to the 3500gns Edendiack Dancer and found a new home locally with father and son, Chris and Tom Heseltine, at Hesketh House, Bolton Abbey, also home to Hesketh Farm Park, currently closed until next February. The Heseltines established their Beltex flock a decade ago and currently have more than 50 breeding ewes on the ground. 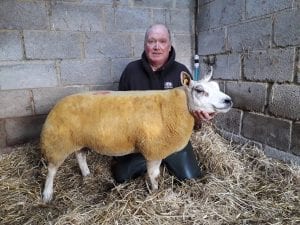 Mr Burleigh achieved second top of 850gns with another March-born shearling ewe, Matt’s Error, one of twins to Hackney Corker, whose breeding has figured prominently in the flock’s past successes at the North Yorkshire venue. Again by a Warrior-sired ewe and also scanned carrying twins to Edendiack Dancer, this one also sold locally into Skipton-based Chris and Linda Windle’s Cavendish flock.

The purchasers of both top price performers said they were keen to add new bloodlines to their respective flocks from a well respected breeder. Both will be keeping their fingers crossed for some top-notch tup lambs, though won’t likely turn down good gimmer lambs to add more females of the new bloodline!

The 600gns selling price was matched by an April-born shearling ewe from North Craven fixture regulars, Mike and Jane Davis, who run the Rathbone flock at Ravenshaw Farm, Eldroth. Their Belvoir View Derminator daughter, Rathbone Emerald, whose own dam was by Rathbone Leader, sold in-lamb to the Irish-bred 1,800gns purchase, Artnagullion Fitbit. The buyer was GW Dent, of Cockfield, Bishop Auckland.

The Davis’s also made 500gns with a second shearling ewe by Y Bedol A-Team, again in-lamb to Fitbit, this selling price also matched by another shearling ewe successfully served by Fitbit, though this time from the Panbeck flock in Hellfield run by Mr and Mrs Davis’ daughter, Becki Dakin, and husband, Nathan. The March, 2019, Panbeck Edith, by Wern Director, out of a Buckles Whizz Kid dam, joined Gargrave’s WG Beckwith.

Thanks to Moule Media for report and images.

The Society’s final in-lamb sale of the season will take place at J36 Kendal tomorrow (Saturday) with the catalogued entry of 45 going under the hammer at 10.30am. In light of recent tier updates, please make sure you have pre-registered before attending and don’t forget you can bid online a via the NWA website. ... See MoreSee Less

An update from North West Auctions for Saturday’s sale at J36 Kendal. Online bidding will be available via the mart’s website. ... See MoreSee Less