Northern Ireland’s Matthew Burleigh, who runs the Matt’s pedigree flock at Shanra, near Enniskillen in County Fermanagh, claimed a memorable hat-trick when sending out the title winner for the third consecutive year at the Northern Beltex club’s eighth annual winter show and sale of pedigree in-lamb ewes at Skipton Auction Mart and on Saturday, 14 December.

Making his annual excursion across the Irish Sea, Mr Burleigh took top honours with his first prize shearling ewe, Matt’s Dragon Fly, a March, 2018-born twin by the Scooby Doo son, Hackney Wonderboy, a 5,000gns acquisition in 2015 and dual winner of both the Balmoral and Irish National Shows, which has bred daughters to 4,000gns.

Out of a dam from Preston-based Harry Wood’s Dean Brow flock by the 12,000gns Matt’s Abracadabra, the victor, like Mr Burleigh’s two previous title winners, was sold in-lamb to Hackney Corker, bred by the Tippetts family in Shifnal, Shropshire. Dragon Fly flew away to the day’s top call of 1,100gns when claimed by the Cornforth family in Tadcaster. 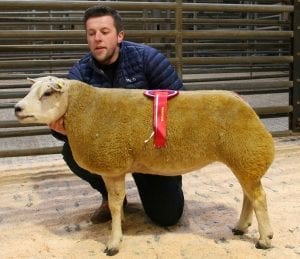 Mr Burleigh, who established his Beltex flock in 2006, then made 900gns with another Wonderboy shearling ewe, the third prize-winning Matt’s Dressed To Kill, out of a Pentland Showman-sired dam. Carrying a single lamb to Ardstewart Angus, she sold locally to Bolton Abbey father and son, Chris and Tom Heseltine, the duo also taking home a third Wonderboy-got Matt’s shearling ewe for 650gns. Mr Burleigh completed a good day when a Murrays Code-sired shearling ewe, again in-lamb to Hackney Corker, made 550gns.

Cumbrian show judge Mark Jennings, of the Hallcrake flock in Selside, remained in the shearling ewe show class for his chosen reserve champion, the second prize winner from North Craven show regulars Mike and Jane Davis, who run the Rathbone flock at Ravenshaw Farm, Eldroth. Their Rathbone Dorothy, is by the home-bred ram, Rathbone Cristiano, used for the first time last year and himself a son of Broxty Supreme. Out of a Woodies Ring A Ding-sired Rathbone ewe, the overall reserve was sold in-lamb to the 3,600gns Airyolland Cobalt, joining David Newhouse at Ghyllstones Farm, Malham, for 550gns.

The Davis’ were prominent among the prizes, also consigning the first and third prize ewe lambs, along with the second and third prize aged ewes. Among their solid run of females was another shearling ewe at 550gns. The Y Bedol A-Team daughter, Rathbone Dainty, again in-lamb to Cobalt, also found a new home in the Yorkshire Dales with Mr Newhouse.

The couple’s daughter, Becki Dakin, and husband, Nathan, who run their own Panbeck flock in Hellifield, won the aged ewe class with Panbeck Carly, a March, 2017, daughter of Rathbone Bob Marley. Again keeping it in the family, she was sold in-lamb due March to the Rathbone flock’s Belvoir View Derminator, joining William Peill in Whittington, Carnforth, at 350gns.

The second prize ewe lamb also sold well at 400gns. It was consigned by Garry and Laura Robinson, who run the Garla flock in Embsay. Their February-born Garla Eclair, by Inveresk Centurion, out of a Airyollad ewe, joined SH Stott, of Sowerby Bridge

Thanks to Moule Media for the report.