Mr Burleigh, who travelled over from Shanra, Enniskillen, in Co Fermanagh, retained the title with his first prize shearling ewe, Matt’s Candle Light, which, like his 2017 victor, is a daughter of Kingledores Apollo. Bred out of a home-bred ewe that goes back to Matts Sparkie, Candle Light sold in-lamb to Hackney Corker for 800gns to the show judge, Karen Shutlleworth, who runs the Heber Park flock at Hargrave with her husband David. 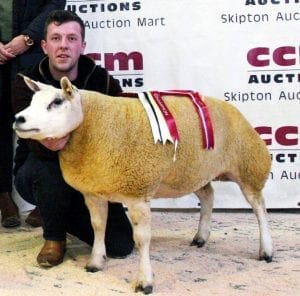 Mr Burleigh, who established his Beltex flock in 2006, took the Reserve Champion title with the first prize ewe lamb, Matt’s Destiny, an embryo daughter of Murrays Code, out of a Dean Brow ewe, which made 450gns when also selling locally to father and daughter, Mike and Becki Davis, who run the Rathbone flock at Ravenshaw Farm, Eldroth. 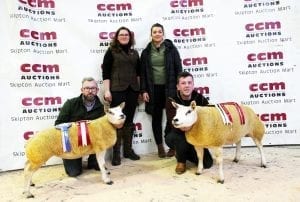 The Davis family itself won prizes in all three show classes as well as the second top call of 750gns for their Y Bedol A-Team ET shearling ewe daughter, Rathbone Clara, claimed by Geoff Riby, of Bridlington, a familiar face at Skipton.

The other two, both in-lamb daughters of The Bare Boy, also sold locally to Tom Crosdale, of Clapham, and Barnoldswick’s Laura Robinson

The red rosette-winning aged ewe came from a first-time vendor from West Wales, Ioan Jones, who runs the Tywi pedigree flock in Maesybont, near Llanelli in Carmartenshire. His 2015-born ET daughter of Ballydown Thunderbolt, scanned carrying twins to the 5,200gns Woodies Bojangles, sold for 480gns.

Another highlight was the presentation of a cheque for £2,402, the proceeds of a charity auction staged by The Northern Beltex Society earlier this year at Stuart and Gail Currie’s Beautry House in Rathmell in aid of the North West Air Ambulance.