Enthusiasm for the Beltex breed continued at Skipton when a new centre record for a shearling ram of 9000gns was paid at the Northern Beltex Club’s sale on Saturday, 5 September. That top price was backed up by a strong commercial demand throughout which resulted in no fewer than 37 shearling rams at 1000gns or above and a shearling average that improved by £240 on the year for the same number sold.

The Kingledores flock from Richard Wood, near Biggar, proved to be the star attraction when Kingledores Elvis ET topped the entry at 9000gns with the ram lamb, Kingledores Frederick ET, selling for the second top price of 4400gns. 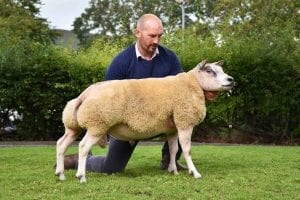 A full brother to the 3200gns Kingledores Engleburt that shared the top price here last year, Elvis is by Arkle DJ which also sired the 11,000gns Kingledores Edmund and 7000gns Kingledores Endeavour sold at the Carlisle Premier as lambs. His dam is the Broxty Boxer-sired Withy Trees Champagne, and buying back some of their own genetics were Andrew and Claire Wood of the Withy Trees flock near Whittingham, Preston, who will share the ram with young Rafe Cartman who has around 15 ewes in his newly established Atherton flock. 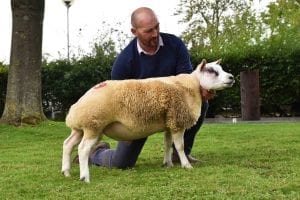 Richard’s leading lamb, Kingledores Frederick ET, was also bred out of the Withy Trees Champagne ewe, this time sired by 10,000gns Ryder DIY shared between five Scottish flocks. He caught the eye of Jo Higgs of the Great Argoed flock, Churchstoke, Powys, who will share him with Scott Sinclair’s Unigarth flock on Orkney. 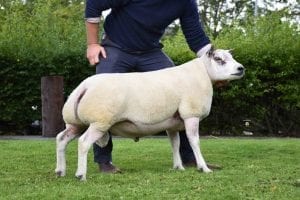 Another Mr Wood was in the money when Aberdeenshire’s Stuart Wood sold his Woodies Electric Boy to P Broughton, Fadmoor, York, for 2800gns. Full of home-bred and Belgian genetics, Electric Boy is by Woodies Adonis whose full brother sold for 11,000gns, while his dam is in imported ewe. 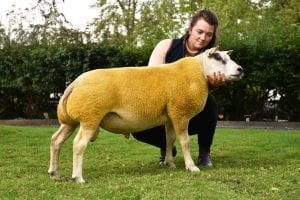 Two were in the money for regular Northern Irish vendor, Libby McAllister and her brother William, from Kells, Ballymena, with the dearest at 2600gns selling to Stuart Currie of the Beautry flock near Rathmell, with Becki Braithwaite taking a half share for her Sovereign flock. That was Artnagullion Elmo ET which is bred from the flock’s consistent brood ewe, the Woodies Snoop Dog-sired Artnagullion Willa, while his sire is Ardstewart Worzel Gumidge. 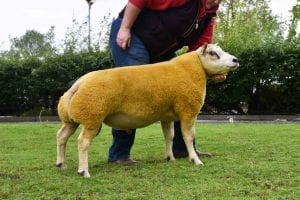 Selling for 2200gns to KG and JL Huck, Bordley, Skipton, was Artnagullion Extraordinary which features different breeding to the pen leader being by Belvoir View Cadillac Jack and out of Artnagullion Bad Girl, a daughter of a Belgian ram called The Bare Boy.

Hitting the 2400gns mark was Mike Davis’ Rathbone Electric from Eldroth, Austwick. Bred from Woodies Talia, a daughter of The Godfather, Electric is by Y-Bedol A-Team that has bred well in the Rathbone flock. Forking out the cash was local producer, AL Thompson, Foulridge, Colne. 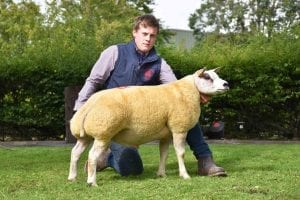 The first of Mr Burleigh’s shearlings at 2000gns was Matt’s Enormous, a Hackney Download son bred from the Pentland Showman-sired Matt’s Waylan. He heads down to Wales with GM Roberts, Llanfihangel, Corwen.

Also making 2000gns, this time selling to C Buckley, Meltham, Holmfirth, was the next lot in, Matt’s Errigal ET. Bred from another Pentland Showman daughter in the shape of Matt’s Avalanche, he is by Woodies Dominator.

A short while earlier, Andrew and Claire Wood, of the Withy Trees flock, paid 1600gns for another Woodies Dominator son, Matt’s Elite ET, which this time is out of the Hackney Warrior-sired Matt’s Accolade.

The Procters flock from Wray, Lancaster, received a top call of 1800gns from local man, JS Stephenson, Skipton, for Procters Enrique ET, brought out by Jeff Aiken. Out of the Myna Actor daughter, Procters Cascada, Enrique is by Woodwick Chino.

Two sold for 1500gns apiece with the first of these being Richard Seed’s Parsonage Engleburt from the flock at Canal Side East, Newport. Sired by Woodwick Charmer and out of Callacrag Whitney, a Muirton Toy Boy daughter, Engleburt sold to the team at Colwill Farm, Oxspring, Sheffield.

Matching that 1500gns a short while later was Bessy Bell Eddie from Gary Scott, Mountjoy, Omagh. His sire is the former Balmoral Show champion, Heber Park Batman, while his dam is Bessy Bell Who Knew It, by Aviemore Tribune. Eddie heads to Barden, Skipton, with KA and HL Fawcett. 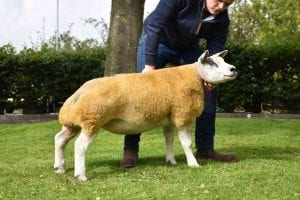 Females were also highly sought after with eight shearling ewes selling at 1000gns or above. Section leader here at 2000gns was Brian Hall’s substitute gimmer, Ainstable Ecclestiastic ET, which sold to relatively new breeder, George Hall, for his Pinmoor flock near Prescot. This daughter of the 15,000gns Black Jack Casanova, which also sired Brian’s 8000gns Ainstable Earnest sold at the Carlisle Premier, is out of the Clary Archie-bred Clary Beauty. 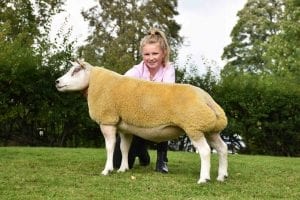 Two gimmers from Procters were in the money with Procters Eternal Flame ET leading this entry at 1800gns when knocked down over the internet to Ali Jackson for his Tiptop flock near Cummertrees, Annan. Her pedigree features Tiree Carter on to Procters Bananarama, a Rathbone Wallace daughter.

At 1300gns when sold to Sally Aspitall and Jeremy Metianu, of the Munday flock near Ashford, Kent, was Procters Elektra ET, another Tiree Carter daughter but this time bred from the Myna Actor-sired Procters Cassandra.

Ewe lambs hit 500gns twice for two Clary Desperado daughters from Procters Farm. First up was Procters Flick ET, out of the Rathbone Wallace-bred Procters Bang Tidy, which sold to the Cornforth family for their Bexbel flock at Newton Kyme, Tadcaster.

Tom Farrar paid that same 500gns for Procters Florentine to join his Tommyboys flock near Healaugh, Tadcaster. Her mother is Procters Dolly Bird, by Myna Actor.