Securing the pre-sale Championship ticket and top price of 4100gns was anything but a fluke for Dafydd Lewis when his shearling ram, Cothi Fluke, did just that at the Welsh Beltex Club’s Welsh Premier Sale at Welshpool Livestock Market on Wednesday, 1 September. 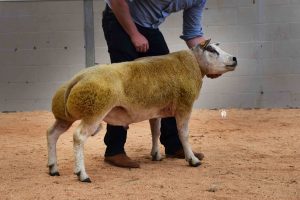 Securing a first championship at Welshpool for Dafydd from Cwrtycadno, Llanwrda, was his Cothi Fluke, a shearling ram which sold to commercial producer, TA Jefferson, Aspatria, Wigton, Cumbria, who sells lambs through Cockermouth, Longtown and Carlisle, as well as rams from home. Sired by Matt’s Everard, Fluke is out of the Airyolland Slingshot daughter, Cothi Double-trouble. 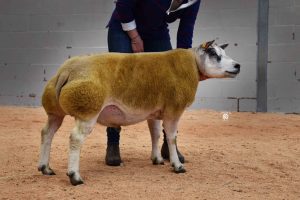 It was a good day for Dafydd whose pen of ten averaged £1610 and also reached 2600gns, 2500gns and 1700gns for three shearlings by the home-bred Cothi Doctor, a son of Fowrass Carry On. At 2600gns when sold to B Blandford & Sons, Eastnor, Ledbury, was Cothi Ferdinand which is bred from the Beetles Thunder Balls-sired Cothi Boom. 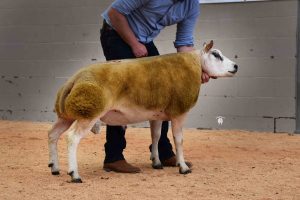 Hitting 2100gns was Cothi Frontpage which this time is out of an imported Belgian ewe and was knocked down to DL Jones, Llanbadarn Fynydd, Llandrindod Wells.

At 1700gns was Cothi First which is out of Cothi Aero, a Macleans Rocket-Launcher daughter, and sold to K Williams, Llangybi, Pwllheli. 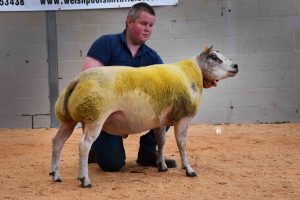 The Jones family’s Glan-Y-Mor flock also met a good trade with males reaching 3600gns and shearling ewes topping the female entry. Sticking with the males and selling to James Whiteford, Tercrosset, Brampton, Carlisle, was Glan-Y-Mor Ford, a son of the imported Alligator ram that has done well for the flock based at Ynys, Talsarnau, Gwynedd. Ford’s dam is Glan-Y-Mor Coco, a Woodies Ringleader daughter. 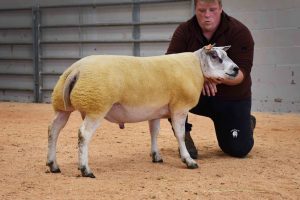 Steve and Sara Gibbons’ Whatmore Firework ET from Tregoyd, Brecon, was next in the trade stakes at 3500gns when sold to Messrs Pilkington. Bred from Edenfauld Well Connected, a Brownville Samson daughter, this lad’s sire is Llwynbrain Nelson. 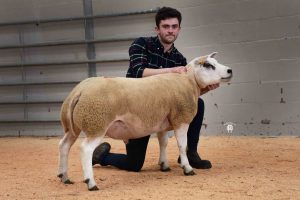 Hitting the 2500gns mark was Cennydd Owen’s Geirn Frosty which was snapped up by an undisclosed buyer from North Wales. His pedigree features Corra Conrad on to the Bishops TV-sired Cerin Winnifred from the flock at Carmel, Llanerchymedd, Anglesey.

Near the end of the shearling offering, Andrew and Becky Bishop received 1850gns from S Lane, Kerry, Newtown, for their Bishops Fire Fox from the flock near Eldersfield, Gloucestershire. Full of home breeding, he is by Bishops Dave and out of a Bishops ewe by the imported ram called The Bulldog.

A short while later, Dafydd Owen sold his Dysynni Franco for 1750gns to C Roberts, Tynygroes, Conway. Sired by Swffryd Danger, Franco’s dam is the Ardstewart Ben daughter, Dysynni Dakota, from the flock at Aberhafesp, Newtown.

Sticking with the male offering and ram lambs met a selective trade, selling to a top of 670gns for Hackney Guiness ET from the Tippetts and Williams team from Shifnal, Shropshire. Sired by Collessie Flash and out of the Topflite Al Pacino daughter, Hackney Coco, he sold to G Davies, Llandewi Brevi, Tregarron. 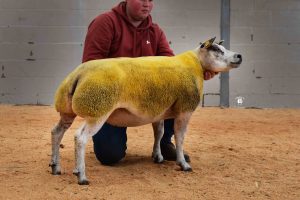 Among the females it was entries from the Jones family’s Glan-Y-Mor flock that met the best of the trade and topped the section at 2200gns when Glan-Y-Mor Flamingo sold to Tecwyn Jones for his Seisiog flock near Nebo, Llanrwst, Gwynedd. Sired by the imported Alligator ram than also bred the 3500gns Glan-Y-Mor Ford sold later in the sale, her dam is Glan-Y-Mor Blueberry, a Cromwell Warrior daughter. 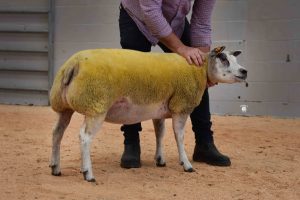 Glan-Y-Mor Fatima, again by Alligator but this time out of Glan-Y-Mor Chelsea, a Matt’s Wild Son daughter, realised 1300gns when knocked down to K Willians, Llangybi, Pwllheli.

At 950gns and also selling to Tecwyn Jones was Glan-Y-Mor Firefly ET which offered some different breeding being by Rathbone Tony and out of the Cromwell Warrior-sired Glan-Y-Mor Azalea. 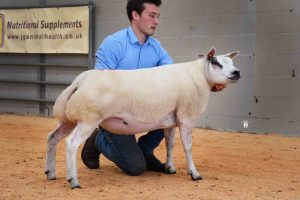