An aged ewe from Sion Jones claimed the Supreme Championship before selling for the top price of 1000gns at the sale of in-lamb females and ewe lambs at Welshpool.

Rising to the top was Fronarth Bluebell, a 2016-born Pantgwyn Wil daughter bred from a home-bred female by Quarrymount Penney in Sion’s flock near Pennant, Llanon, Ceredigion. Bluebell sold to IRH Bebb, Ffridd-Conwy, Llanwddyn, Shropshire, having been AI’d in September to the 3,000gns Muirton Buchan Loon. 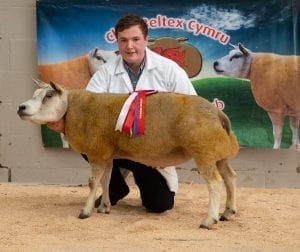 The champion from Sion Jones sold for 1,000gns.

Second best at 580gns was Cerin Coline Jones, a Shearling Ewe from W & E Evans, Dderwen Gam, Llanarth, Ceredigion. Full of home breeding, being by Cerin Tarw and out of Cerin Wynne, she was served in October by Cothi Bush Hogg and sold to IE Roberts & Son, Llanwddyn. 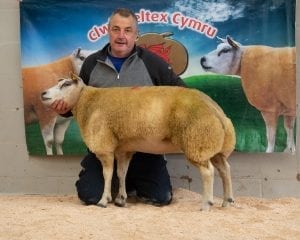 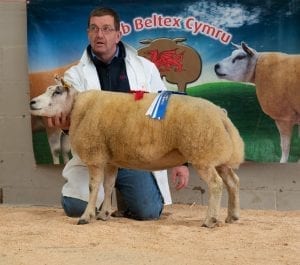 The reserve champion from R. And S. Rattray sold for 460gns.

Matching a previous 420gns when sold to JT Jones, Llangadfan, Powys, was the dearest of the Ewe Lambs, Crew Dance All Night ET from Rhys Francis, Abergorlech, Carmarthenshire. This February-born entry which picked up a blue ticket at the show is full of Belgian breeding, being by Zorro and out of an imported Van’t Hoveke ewe. 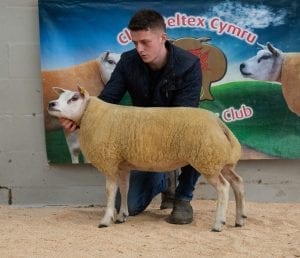 The highest price ewe lamb at 420gns from Rhys Francis.